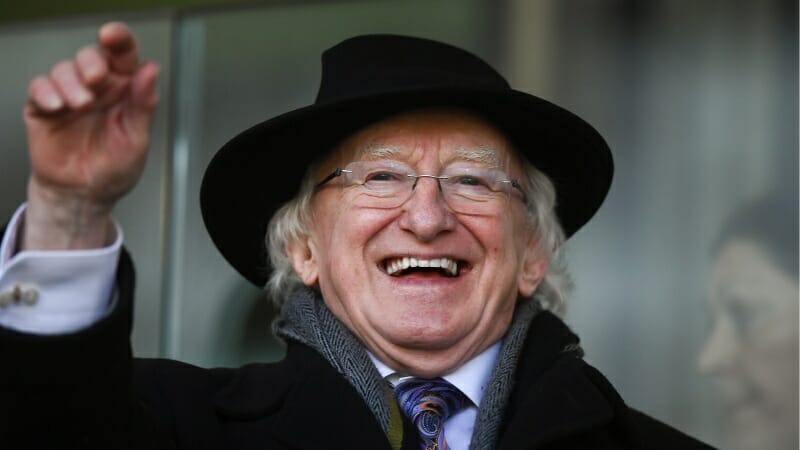 The thing about President Higgins these days is that just when you think he can’t get any more absurd, he proves you wrong. Here he is now, suddenly fierce concerned about human rights abuses and conflict with peaceful protests:

President Michael D. Higgins has expressed the “greatest heartbreak” at scenes of “military confrontation with peaceful protesters” in the United States. pic.twitter.com/c1NbsJVfwQ

It’s worth remembering a line from President Higgins’s eulogy for dead Cuban dictator Fidel Castro, just a few years ago, in the context of his newfound worry about conflict with peaceful protestors:

“Having survived some 600 attempts on his life, Fidel Castro, known to his peers in Cuba as ‘El Comandante’, became one of the longest serving Heads of State in the world, guiding the country through a remarkable process of social and political change, advocating a development path that was unique and determinedly independent.

Cuba achieved 100% literacy many years ago and built up a health system that is one the most admired in the world. With economic growth rates similar to many other Latin American countries, inequality and poverty are much less pronounced in Cuba than in surrounding nations.

His Governments faced not only issues of Development but also the consequences of an embargo imposed by Cuba’s largest neighbour, the United States, which was a regular topic for discussion at the United Nations and which was criticised by a large number of countries in the international community.

The economic and social reforms introduced were at the price of a restriction of civil society, which brought its critics.

Fidel Castro was of a generation of leaders that sought to offer an alternative global economic and social order. He was President of the Non Aligned Movement and a leading figure in international gatherings that sought a more equal world of trade, rejected odious debt and sought an independent path to development.”

The most astonishing thing about that statement in hindsight, for a man as erudite as the President, is the phrase “which brought its critics”. He could have said “for which he was fairly criticised”, or “which was regrettable”, but he didn’t. He deliberately chose a form of words which excluded him, and therefore the people of Ireland, from those who might criticise the restriction of civil society.

And yet here he is today, heartbroken by the sight of conflict with peaceful protestors?

It’s perfectly possible to agree with the President about the United States. But it’s not possible to deny that he’s an absolute hypocrite on this stuff, who’s much more willing to criticise the US than he is to criticise brutality and oppression from left wing regimes. If he genuinely cared about this stuff, he’d condemn it everywhere. But he doesn’t, and never has. He cares about advancing his own ideology, civil rights be damned.