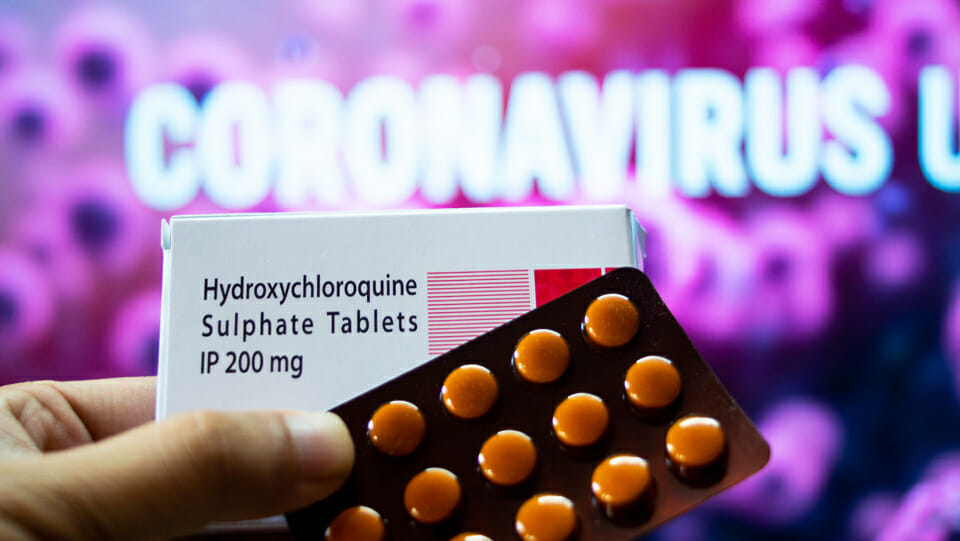 A new study has found that patients hospitalised with Covid-19 were much less likely to die if they were treated with the antimalarial drug hydroxychloroquine.

Treatment with hydroxychloroquine cut the death rate significantly in sick patients hospitalized with COVID-19 – and without heart-related side-effects, according to a new study published by Henry Ford Health System in Michigan.

In a large-scale retrospective analysis of 2,541 patients hospitalized between March 10 and May 2, 2020 across the system’s six hospitals, the study found 13% of those treated with hydroxychloroquine alone died compared to 26.4% not treated with hydroxychloroquine. None of the patients had documented serious heart abnormalities; however, patients were monitored for a heart condition routinely pointed to as a reason to avoid the drug as a treatment for COVID-19.

“We attribute our findings that differ from other studies to early treatment, and part of a combination of interventions that were done in supportive care of patients, including careful cardiac monitoring. Our dosing also differed from other studies not showing a benefit of the drug. And other studies are either not peer reviewed, have limited numbers of patients, different patient populations or other differences from our patients.”

Zervos said the potential for a surge in infections showed an urgency to identifying inexpensive and effective therapies and preventions.

“We’re glad to add to the scientific knowledge base on the role and how best to use therapies as we work around the world to provide insight,” he said. “Considered in the context of current studies on the use of hydroxychloroquine for COVID-19, our results suggest that the drug may have an important role to play in reducing COVID-19 mortality.”

“Our analysis shows that using hydroxychloroquine helped save lives,” said neurosurgeon Dr. Steven Kalkanis, CEO, Henry Ford Medical Group and Senior Vice President and Chief Academic Officer of Henry Ford Health System. “As doctors and scientists, we look to the data for insight. And the data here is clear that there was benefit to using the drug as a treatment for sick, hospitalized patients.”

The analysis showed that regardless of treatment, mortality was highest in patients older than 65, patients who identified as Caucasian, patients admitted with reduced oxygen levels, and patients who required ICU admission. It also revealed that patients who died commonly had serious underlying diseases, including chronic kidney and lung disease.

Dr. Zervos also pointed out, as does the paper, that the study results should be interpreted with some caution, should not be applied to patients treated outside of hospital settings and require further confirmation in prospective, randomized controlled trials that rigorously evaluate the safety and efficacy of hydroxychloroquine therapy for COVID-19.

“Currently, the drug should be used only in hospitalized patients with appropriate monitoring, and as part of study protocols, in accordance with all relevant federal regulations,” Dr. Zervos said.

He said it was important that patients were treated early. “For hydroxychloroquine to have a benefit, it needs to begin before the patients begin to suffer some of the severe immune reactions that patients can have with Covid,” he said.

Henry Ford Health System is currently also involved in a prophylactic hydroxychloroquine study: “Will Hydroxychloroquine Impede or Prevent COVID-19,” or WHIP COVID-19. The study is a 3,000-person, randomized, double-blinded look at whether hydroxychloroquine prevents healthcare and frontline workers from contracting the COVID-19 virus.

The reaction of some of the US media to the study was revealing, with CNN describing the results of the analysis as ‘surprising’.  Hydroxychloroquine has been licenced for use as a safe drug for decades but it became the subject of controversy after President Donald Trump touted the drug early in the Covid crisis.

The debate as to the efficacy of hydroxychloroquine seems to have become more about politics than science or medicine .

The world’s media made headline news of a study, published in the prestigious peer-reviewed journal the Lancet in May which claimed  hydroxychloroquine was ineffective against covid-19, and was also dangerous and increased the risk of dying. As noted previously on this platform “to most of the media, it seemed, the failure of hydroxychloroquine was also the failure of Trump, and therefore something to be welcomed. The tone of CNN and many others was very close to crowing, as they asserted that Trump was wrong and that the drug was dangerous and to be avoided in treating Covid-19.”

It turned out that, in a most embarrassing episode for the Lancet, that the data for the study was faked. It has since been retracted.  That did not seem to attract anything like the same media publicity as the publication of the fatally flawed study.

Covid-19 has underlined the importance – for patients, medical professionals and policymakers – of ensuring that politics is not allowed to skew scientific research.

Something has gone “very badly wrong” with the EU – Nick Clegg