China now uses drones to track suspects – but is the West far behind? 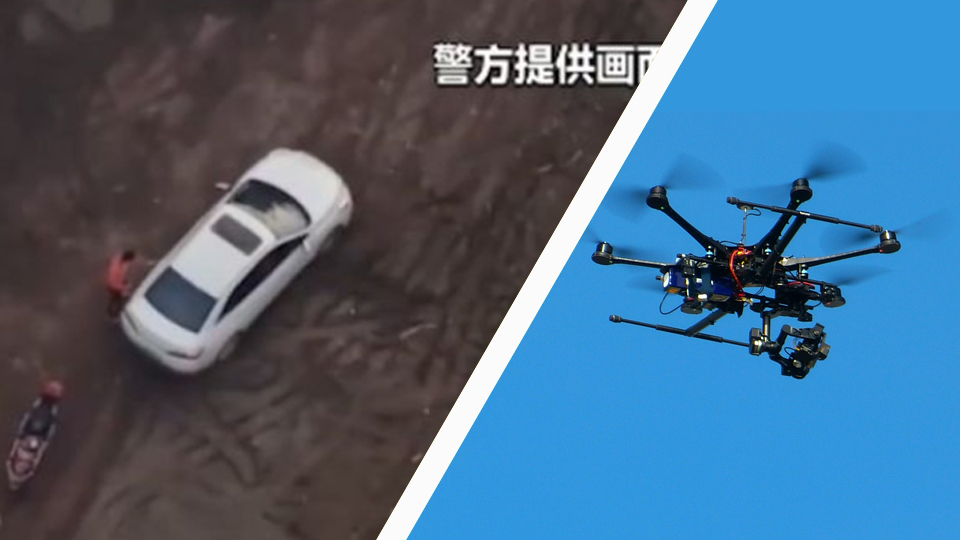 Chinese police have reportedly used a drone to record and intercept an alleged drug deal in the southern city of Guilin.

The video, which police shared with the Chinese State broadcaster CCTV (China Central Television), shows the suspects being pursued by the unmanned aerial drone until they are finally cornered and arrested by human officers on the ground.

This is not the first time drones have been used in Chinese police operations however – in 2019 a fugitive who had been on the run for 17 years in the south-western Yunnan province was caught hiding out in a cave by police drones. He was subsequently arrested and sent back to prison camp, which he had escaped in 2002.

More recently, throughout the coronavirus pandemic, Chinese state drones have been used to enforce mask usage and other covid-19 regulations, hovering around villages and metropolitan areas and barking orders at citizens who fail to comply.

While all of this may sound like something out of a dystopian science fiction novel – with flying mechanical “eyes in the sky” watching over a populace at all times – it may surprise some that more and more Western governments have been embracing similar approaches to law enforcement in recent years.

For example, according to the Business Post, Irish Gardaí have considered drones for the first time ever this year, with former Justice Minister Charlie Flanagan claiming that police are considering the technology for crime scene mapping, evidence collection, and other unspecified applications. Additionally, Fianna Fáil has insisted that Gardaí should adopt drone technology as part of their police work.

While the normalisation of this technology for law enforcement is still in the discussion phase in Ireland for now, it’s already a reality in much of Europe and North America. Throughout the covid-19 pandemic, we’ve seen examples of drone surveillance used to monitor Britain’s more scenic locations, with authorities spying on sightseers from above in the name of the lockdown.

Despite posts yesterday highlighting issues of people still visiting the #PeakDistrict despite government guidance, the message is still not getting through. @DerPolDroneUnit have been out at beauty spots across the county, and this footage was captured at #CurbarEdge last night. pic.twitter.com/soxWvMl0ls

In a similar vein, Spanish police have used drones fitted with loudspeakers to patrol the streets of Madrid and other built up areas, loudly ordering citizens to remain at home.

On Saturday, the country's 47 million citizens were ordered to stay indoors except for necessary tripshttps://t.co/Yqcy5K9OLC pic.twitter.com/jmLlQfQYXc

The EU last year proposed deploying swarms of AI controlled-drones to monitor Europe’s borders for illegal activity in a project called “Emerging Game-Changers”. They have also recently come under fire for donating drones to the Beluarus government, which has been accused by some of an authoritarian crackdown on its citizens.

The US, too, has seen the use of drones to enforce the law, such as in Elizabeth Wisconsin, where police used drones donated by the Chinese tech company DJI to surveil citizens.

Insane. Police are using drones to enforce social distancing by spying on Americans in their backyards. Police chief says invasion of privacy is worth it “if it saves one life.” At a certain point even the most obsequious bootlickers will have had enough

In fact, all of the aforementioned countries used Chinese-made drones, and it’s not hard to see why. China’s main region for electronics production, Shenzhen, supplies up to 70% of the world’s commercially available UAVs. If you’ve ever bought a drone for personal use, chances are it came from Chinese industry.

This has raised serious concerns among security watchdogs, who argue that data collected using Chinese drones may not be secure and may be providing a backdoor for the Communist State to breach Western privacy, similar to the Huawei security scandal.

Silkie Carlo, director of Big Brother Watch, a UK civil liberties defence group, said “Drones are an extreme, militaristic form of surveillance. We’ve seen too many examples of police using them aggressively in place of measured public health communications. Police using drones to surveil and bark orders at members of the public is usually excessive and counterproductive. Parliament should introduce stronger safeguards to circumscribe their use.”

Time will tell if these technologies prove to be an asset to society or an authoritarian curse.

Trump in Ireland: Tim Jackson has a point of view you won’t hear elsewhere.