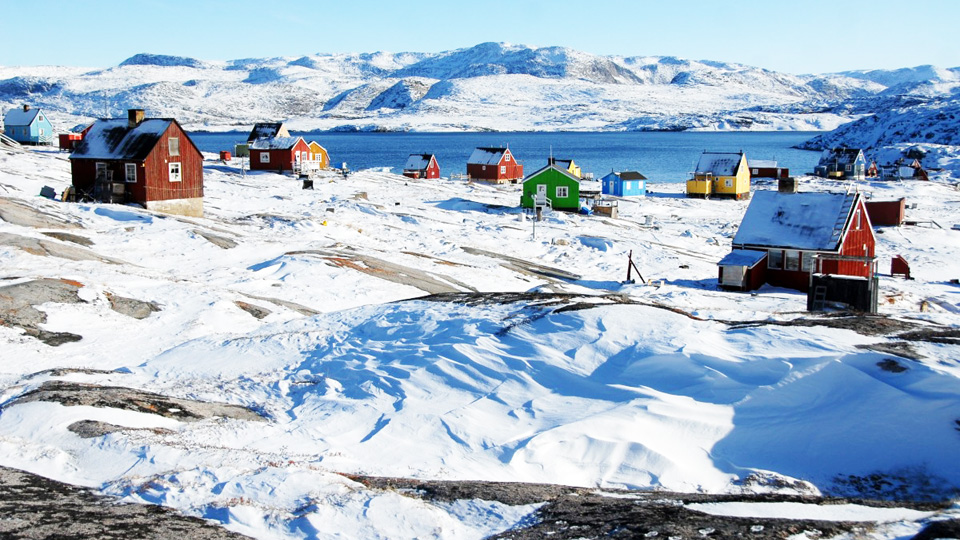 Last month it was reported that US President Trump had “with varying degrees of seriousness” spoken about the idea of the US buying Greenland [i] – an idea which did not fare well, but which briefly placed the island centre stage. There followed a very large increase in searches for flights to Greenland, and such an increase in traffic to the Greenlandic tourism website that the site crashed.[ii]

Surprisingly, the idea of the US buying Greenland was not at all unprecedented historically. The US had even offered a price for it in 1946.[iii] In addition, the US had purchased the Danish West Indies (now the US Virgin Islands) from Denmark in 1916.[iv]

There is of course much more of note in the affairs of Greenland than some recent flash-in-the-pan headlines. For starters, its history includes an interesting forerunner of Brexit: following a 1982 referendum Greenland left what was then the EEC (European Economic Community) in 1985, and a special status in relation to the EEC was negotiated.[v] As a Danish territory it had originally become part of the EEC with Denmark, but was able to leave after obtaining a degree of autonomy (home rule) in 1979.[vi]

Have you ever wondered though how Greenland became part of the Kingdom of Denmark in the first place? The judgment of the Permanent Court of International Justice in the Legal Status of Eastern Greenland case[vii] gives us some fascinating insights into that question, and into a historic international Courtroom battle over a sizeable chunk of that vast island. 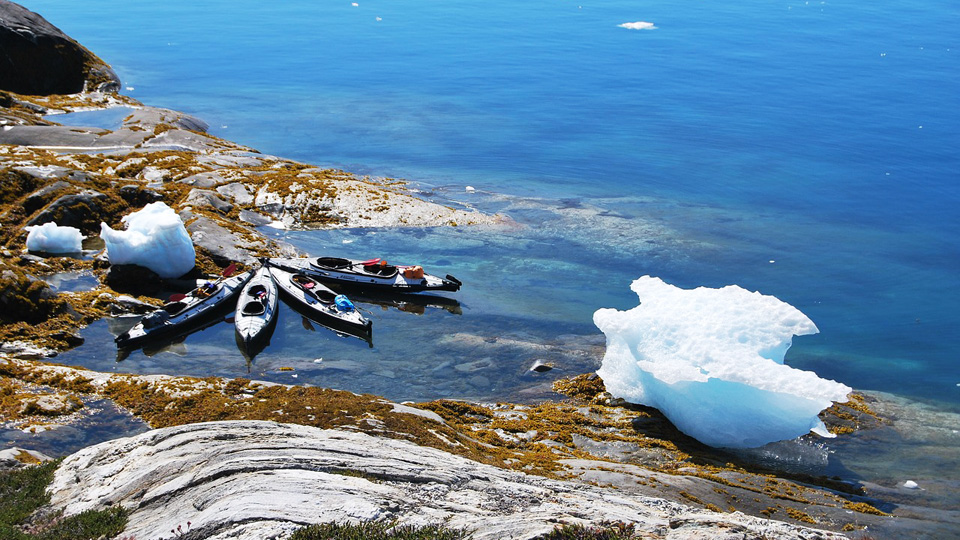 The case was a dispute between the Danish and Norwegian Governments as to which of their two kingdoms had a valid claim over part of eastern Greenland. On 10th July 1931 the Norwegian Government had published a proclamation declaring that it had proceeded to occupy certain territory in eastern Greenland, which the Danish Government contended was under Danish sovereignty. Both countries brought the matter before the international Court.

How was the Court to decide which of two countries owned a piece of territory which was some distance removed from either, but which both nevertheless claimed an entitlement to? Essentially by looking at each one’s past dealings relating to the territory concerned. Denmark contended that it had long claimed and exercised sovereignty over Greenland as a whole and had a valid claim to it on that basis. The Court said that in order to establish a claim to territory in this way Denmark would have to show two elements: “the intention and will to act as sovereign, and some actual exercise or display of such authority.” The Court noted that, in many cases of this kind, “very little in the way of the actual exercise of sovereign rights” had proved to be enough to establish a valid territorial claim, particularly for “claims to sovereignty over areas in thinly populated or unsettled countries.”

The Court had to look at the evidence in favour of each country’s claims. There was much evidence of the King of Norway’s authority in Greenland stretching far back, for example a 1261 document indicating that the men of Greenland undertook to pay fines to the King of Norway when murders were committed in Greenland. From 1380 to 1814 the kingdoms of Denmark and Norway were united under the same crown. During that period, in 1721, Hans Egede (a Norwegian) founded a new colony in Greenland, which was followed by other settlements, and legislation was passed covering the whole of Greenland. The Court concluded:

“…bearing in mind the absence of any claim to sovereignty by another Power, and the Arctic and inaccessible character of the uncolonized parts of the country, the King of Denmark and Norway displayed during the period from the founding of the colonies by Hans Egede in 1721 up to 1814 his authority to an extent sufficient to give his country a valid claim to sovereignty, and…his rights over Greenland were not limited to the colonized area.”

However, the Court found that, up to 1814, “the rights which the King possessed over Greenland were enjoyed by him as King of Norway.” Up to 1814 therefore, the evidence favoured Norway’s claim. It was in 1814 however that the position changed dramatically. That January, Denmark was compelled to sign the Peace Treaty of Kiel. The Treaty gave to the King of Sweden the Kingdom of Norway, but subject to the King of Denmark retaining a number of territories (including Greenland) that had been linked with Norway.[viii] The Court explained

“The result of the Treaty was that what had been a Norwegian possession [i.e. Greenland] remained with the King of Denmark and became for the future a Danish possession.”

Nevertheless, in later years Norway did have various connections with Greenland. The Court observed:

“As regards Norwegian activities, in addition to visits to the East coast paid periodically during the summer from 1889 onwards, expeditions wintered in the territory in question in 1908 and 1909, and again in 1922 and in 1926 and the ensuing years. The expedition of 1922 established a provisional wireless station at Mygg-Bukta (Mackenzie Bay), but the Danish Government made a protest immediately against its erection…. Since 1929 both hunting operations and the wireless service have been carried on by a Norwegian Company…. The various Norwegian expeditions also have built a large number of houses and cabins in the disputed territory.”

The Court however seemed to attach little weight to these facts. It referred to a number of international conventions containing statements indicating that Greenland was a Danish possession. These conventions showed a willingness on the part of the other parties to the conventions to admit Denmark’s rights over Greenland. They also showed that Denmark intended to exercise sovereignty over Greenland. Accordingly, these conventions by implication supported Denmark’s claim.

There were further exercises of sovereign authority by Denmark too. For example, in the 19th century Denmark granted concessions for the erection of telegraph lines and set up a commission “for the study of the natural and ethnographic phenomena of Greenland”. In 1905 Denmark issued a decree fixing the limits of the territorial waters around Greenland. The Court concluded:

“In view of the above facts, when taken in conjunction with the legislation she had enacted applicable to Greenland generally, the numerous treaties in which Denmark, with the concurrence of the other contracting Party, provided for the non-application of the treaty to Greenland in general, and the absence of all claim to sovereignty over Greenland by any other Power, Denmark must be regarded as having displayed during this period of 1814 to 1915 her authority over the uncolonized part of the country to a degree sufficient to confer a valid title to the sovereignty.”

Later evidence also helped Denmark’s claim. Based on a controversial interpretation of various diplomatic notes, the Court found that, between 1915 and 1921, Denmark had sought and obtained recognition of its existing sovereignty over Greenland from the U.S., Italy, Japan, Britain, France and Sweden. As a condition of recognising the Danish claim, Britain initially asked for a right of pre-emption in the event of Denmark deciding to sell Greenland. This idea was opposed by the U.S. and Denmark, and the British Government settled for reserving an entitlement to be consulted if Denmark ever thought about selling Greenland.

In 1921 Denmark issued decrees claiming the whole of Greenland and excluding ships from its coasts and islands. Denmark later enacted legislation regulating the hunting and fishing in Greenland, dividing Greenland into provinces and declaring that all commercial activity was reserved to the Danish State. The Court said that these and other actions by Denmark between 1921 and 1931, including hunting and scientific expeditions supported by its government and issuing of permits to visitors to eastern Greenland, were enough to establish Denmark’s claim, even independently of all the pre-1921 actions Denmark relied on. The pre-1921 history merely “confirmed and strengthened” Denmark’s claim. Accordingly:

“…the Court is satisfied that Denmark has succeeded in establishing her contention that at the critical date, namely, July 10th, 1931, she possessed a valid title to the sovereignty over all Greenland.”

That was enough for the Court to rule against Norway’s claim. On top of all that, the Court found that Norway itself had already recognised Danish sovereignty over all of Greenland anyway, and so could not proceed to occupy any part of it. This view was based on treaties that referred to Greenland as a Danish territory – treaties both predating and postdating Norwegian independence, and to which Denmark and Norway were party. There was also a declaration by the Norwegian Foreign Minister in 1919 which, in the Court’s view, precluded Norway from contesting Danish sovereignty over Greenland or occupying any part of it.

The Court, by a 12-2 majority, ruled that the 1931 Norwegian declaration of occupation, and any steps taken by Norway in respect of that declaration, were unlawful and invalid. Following the Court’s ruling, Norway also promptly revoked a 1932 decree claiming another part of Greenland.

It has been said that the ruling “was received with much rejoicing in Greenland.”[ix] Today, pursuant to the Act on Greenland Self-Government (2009), Greenland has a high degree of autonomy and the Act makes provision for Greenlandic independence should the people of Greenland so decide.[x] This may yet come to pass: according to the country’s official tourism website:

“In the Greenlandic parliament there is a majority for the country to move towards independence from Denmark once certain necessary prerequisites are in place.”[xi]

Save where otherwise indicated in the endnotes, the above facts are from the majority judgment of the Court and the concurring and dissenting judgments in the Legal Status of Eastern Greenland case, and the Court’s order of 11th May 1933 in the Legal Status of the South-Eastern Territory of Greenland case (all of which are available on the website of the International

[i] The Wall Street Journal, 16th August 2019: https://www.wsj.com/articles/trump-eyes-a-new-real-estate-purchase-greenland-11565904223
[ii] https://fortune.com/2019/08/23/trump-greenland-tourism-boom/
[iii] The Wall Street Journal, 16th August 2019
[iv] Shaw, International Law (8th edition, Cambridge University Press, Cambridge, 2017) p. 370
[v] Sørensen, Denmark-Greenland in the twentieth century (The Commission for Scientific Research in Greenland/Museum Tusculanum Press, Copenhagen, 2006) p. 167. Greenland’s special status is reflected in Part Four of the Treaty on the Functioning of the European Union and the Protocol on special arrangements for Greenland annexed to the EU Treaties.
[vi] Sørensen, pp. 151 and 167
[vii] Judgment of 5th April 1933, available at https://www.icj-cij.org/en/pcij-series-ab
[viii] Norwegians understandably rejected the idea that their country could simply be given to another king, but later in 1814 a union of Norway and Sweden was concluded.
[ix] Sørensen, p. 54
[x] An English translation of the Act is available via the website of the Greenlandic Government at https://naalakkersuisut.gl/~/media/Nanoq/Files/Attached%20Files/Engelske-tekster/Act%20on%20Greenland.pdf
[xi] https://visitgreenland.com/american-interest-in-greenland/

Geoffrey Sumner is a barrister living and working in Galway 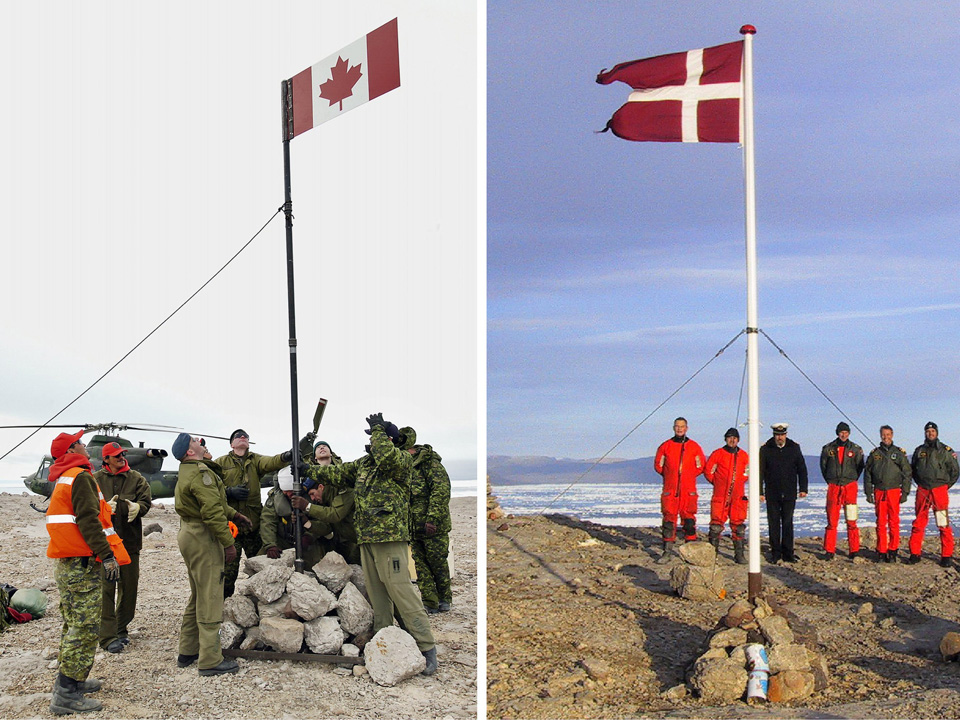 A Canadian flag raising on Hans Island in 2005, left, and a Danish flag raising in 2002. From left: Canadian Department of National Defense, Polfoto 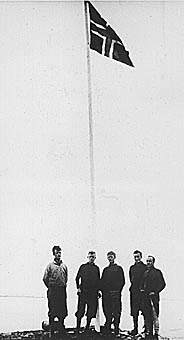 Erik the Red’s Land was the name given by Norwegians to an area on the coast of eastern Greenland occupied by Norway in the early 1930s. It was named after Erik the Red, the founder of the first Norse or Vikings settlements in Greenland in the 10th century. The Permanent Court of International Justice ruled against Norway in 1933, and the country subsequently abandoned its claims.

Japanese robotic matchmakers to the rescue!