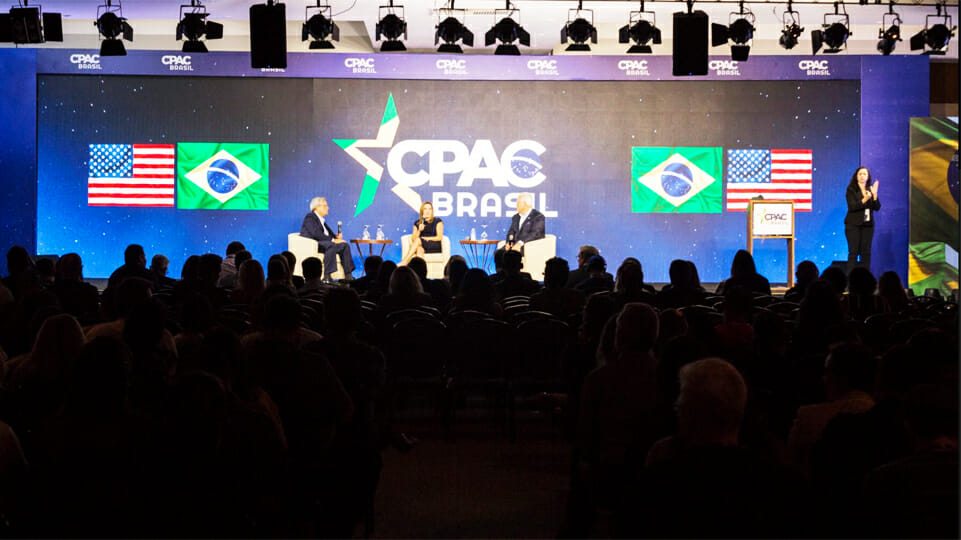 The Brazilian conservative movement gathered momentum last week by hosting the first Conservative Political Action Conference (CPAC) in the country. Several members of President Jair Bolsonaro’s cabinet spoke in the high-energy event in São Paulo, which covered issues from gender ideology and abortion to the importance of making conservative voices heard, and the right to self-defence.

Speakers emphasised the acknowledgement and protection of perennial values against Marxism-rooted ideas that have been promoted through cultural institutions in Brazil for the past 40 years or so and have become staples of public policies since the advent of social-democracy with President Fernando Henrique Cardoso in the mid 1990s. Cardoso served two terms and was followed by 15 years of rule from the Worker’s Party of Luiz Inácio, Lula da Silva and Dilma Rousseff.

Bolsonaro’s chief of staff, Onyx Lorenzoni, described the 1990 São Paulo Forum founded by Lula and Fidel Castro as a “dangerous power project” which joined socialist parties from Brazil, Cuba, Argentina, Venezuela, Nicaragua, and Bolivia, among others, and also gave solace to terrorist groups involved with kidnappings and drug dealing such as the Revolutionary Armed Forces of Colombia and the Revolutionary Left Movement of Chile.

The election of Jair Bolsonaro, most speakers at CPAC stressed, came to stop and reverse the leftist march, but the difficulties posed by interest groups long established in various spheres are immense. Onyx Lorenzoni referred to Antonio Gramsci’s strategy of taking over institutions such as academia, media, publishing houses, and the Church to achieve cultural hegemony, adopted by the Brazilian left following its political defeat by the military in 1964.

“We witnessed a total inversion of values throughout the Worker’s Party era. We saw the security forces being devalued. Criminals became good guys and good guys criminals, with support from Globo (the largest Brazilian TV channel). We saw soap operas and TV series where the criminal was glamorised and violence was relativised. Policemen became afraid of defending their own lives in combat,” he said. The disarmament policy initiated by Fernando Henrique Cardoso and carried out by Lula, Onix said, brought about “a sad period where the Brazilian government made sure for thugs that law-abiding people would have no chance to defend themselves.”

This and many other things are going to change, Lorenzoni promised the conference. “We have reduced homicides by 22% in the first seven months. The government also has reduced the ministerial machinery and broken the spurious exchange of favours. We are doing the greatest pensions’ reform on Earth and have done something hitherto unthinkable: the Economic Freedom Law. for the first time, the citizen is king and the state employee is servant. We are reducing the size of the state.”

Bolsonaro’s chief of staff noted that the left, after so many years in control, is more than ready for revenge. “We cannot miss this chance. They won’t give us a truce. Neither will the mainstream media nor Brazilian and international left. For the first time we have the opportunity to write the history of Brazil. We can plant foundations of principles and values so that the people that will never allow them (the left) to come back and do what they have done again.”

Onyx was emotional at some moments, and barely held back the tears when he remembered the assassination attempt against Bolsonaro, in which he was stabbed in the abdomen and lost two and a half litres of blood. “We were blessed to have the most unexpected of the representatives, chosen and lifted by God. That knife… half an inch further in… three minutes more for the car to arrive at the hospital, and we wouldn’t be here. We are not products of chance. We won’t give up. Ideological duel is democracy alive! What we had before was the hegemony of the left. It’s over! We exist!”

In the same vein, federal representative Eduardo Bolsonaro, Jair’s son, highlighted the importance for conservatives of speaking their minds and not being despondent by “the spiral of silence” that the left tries to pass as normal debate.

“You don’t speak up, he doesn’t speak up, she doesn’t speak up, and then everybody thinks Jair Bolsonaro is alone”, Eduardo said addressing the audience from all over Brazil and also Venezuela and the USA. If conservatives conform to shut up and listen, he said, the left could achieve victories such as the ones observed in Ireland.  This spiral of silence is what shouted down countries that previously had a catholic majority like Ireland, he said.

The president’s son illustrated his point with a story shown in a major TV channels in Brazil, in which a paedophile was presented not as a criminal but as a man suffering from a “disease”, who needed medical treatment, not imprisonment. “If nobody speaks up against this kind of thing, everybody will agree with it. For God’s sake folks. Enough with this thug-idolatry.”

He exhorted his listeners to celebrate points already scored. “We are ending this year without having a single corruption scandal. One year without the risk of having abortion approved. Without discussing gender ideology in schools. We are transforming this country.”

Minister for Education Abraham Weintraub also spoke against relativism and how leftist ideologies undermine the self. “They are destroying the difference between sexes, therefore our individual identity, because if I don’t know who I am, why will I fight? They destroy our family identity: if I don’t have children, for whom will I fight? They destroy our values and our historical references. Where are the books that defined Brazilian culture? Where is the Bible? This destruction is not without purpose. Attacks against the right to self defense, the right to have guns, to private property – all of these are symptoms of a larger attack. We are fighting for our freedom.”

One the most applauded members of Bolsonaro’s team at the CPAC, minister for Women, Family and Human Rights Damares Alves showed how leftists in Congress have tried to bypass open scrutiny by surreptitiously including abortion, gender ideology, and drug-liberation into apparently harmless pieces of legislation, and how they were outsmarted by a “silent conservative army” acting backstage, of which then representative Bolsonaro and Damares were part.

Damares, who as a Protestant preacher is well-practised in the art of engaging audiences, began on a high note, highlighting the contrast between the people present at the CPAC and the most unhinged opponents of Bolsonaro, especially those found in Humanities campuses. Addressing the YouTube crowd watching from all over the country, she announced:

“Since we are live, let me tell Brazil something. I’ve been here with this public for nearly 24 hours, mostly young people, and nobody has offered me a joint yet, and no girl has introduced a crucifix in her vagina either”.

It was uphill from there. She replied to a Brazilian archbishop who warned against what he called “the dragon of traditionalism” and said “the right is violent and unjust” during a mass held a few hours before the conference.

“Are we violent because we want a peaceful nation? Why are they worried? Because Brazil has changed already”, Damares said. “The figures that show we are changing this nation are already out there: 22% less homicides in the first seven months of 2019. The specialists are beating their brains out and cannot explain how we’ve managed to redhomicides in only seven months. They’re crazy about it. Yet, there’s only one answer: the good people of this nation have stood up and the good people of this nation are governing it. Simple as that.”

The minister for Human Rights also reminded the CPAC of how leftists lie to push for abortion under the guise of women’s safety. “One representative put up on social media that more than one million women died from abortion every year. They manipulate numbers, statistics, information to get where they want. Then, when we went there and asked her to show where were the millions of graves, the millions of death certificates per year, she edited the post: it was a million women dead in the world…”

She also exposed two bills from former representative Jean Wyllys of PSOL (“Socialism and Freedom Party”), one trying to free drug dealers and the other allowing children to bypass parents and have genitalia-changing surgery.  “He produced a bill allowing everyone to grow 12 marijuana plants at home. Everybody thought he had stopped there. But no. They didn’t read one provision which gave amnesty to everyone who had been arrested for selling marijuana prior to the sanction of the law. He asked retroactive application so that drug dealers would be freed. This is what the left wanted in 2014. Then we started to organise, to talk to senators, and the bill was rejected.”

On gender ideology, Damares said the election of Bolsonaro came “to interrupt a cycle of pain and suffering”, illustrating her case with another bill from the socialist representative, the “Gender Identity Law”, by which minors could undergo “surgical interventions” and hormonal treatment without the parents or guardians’ consent.  “Our children were under attack. Bolsonaro government came to say `enough with this confusion`. Let boys be boys and girls girls. Let children be children!”, she said to applause.

Damares finished her talk addressing the Amazon Synod, where left-leaning priests claimed there is no such a thing as infanticide committed by indigenous people in Brazil. She proceeded to show a video from 2018 in Mato Grosso, where policemen rescued a newly-born baby girl who had been buried alive in a backyard, and remained so for six hours, by her grandmother.

“The first and the greatest of all human rights is the right to life,” the minister said. “The baby was buried because she was the daughter of a single mother. For many years they have hidden from us that many indigenous peoples still kill their children in the name of culture. When the mothers are single, when the babies are twins or have some physical or mental impairment. And the people who were in power said we cannot save those children because it’s their culture. Hypocrites!”

Operation ‘Back to Life’: How Israel is Leading the World’s Vaccination Campaign