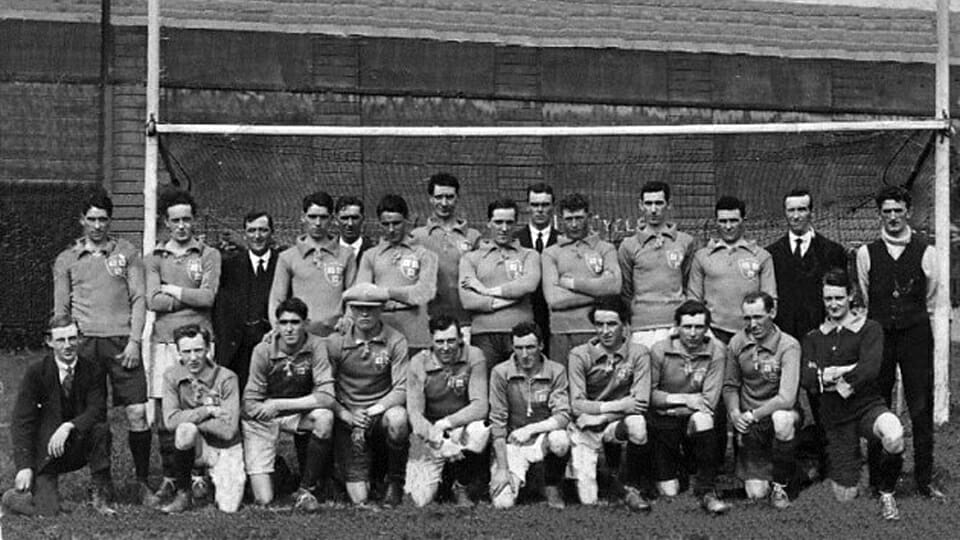 This Saturday will mark the hundredth anniversary of one of the most dramatic days in the Irish War of Independence. On Sunday November 21, 1920 the killing of 16 British intelligence and military personnel was followed by a retaliatory attack by British forces on a Gaelic football match between Dublin and Tipperary in Croke Park which cost a further 14 lives.

The British forces had their fates sealed hours before the events. The Officer in Command of the Dublin IRA, Dick McKee, had briefed some of those who were to take part in the attack on British intelligence in the Tara Hall on Gloucester Street, now Seán MacDermott Street, on Saturday night. He and Brigade Adjutant Peadar Clancy were arrested in the early hours of the morning in the Fitzgerald house on Gloucester Street and brought to Dublin Castle where they were tortured and killed by members of the Auxiliary F Company.

Another Volunteer, Conor Clune, was killed when arrested at around the same time in Vaughan’s Hotel on Parnell Square.

McKee was from Finglas Bridge which was then a small hamlet named for the bridge over the Fionn Glas stream which joined the Tolka about a mile from Finglas Village. He and Clancy had been betrayed by a local informer and criminal ‘Shankers’ Ryan who was killed by the IRA in early 1921.

While the myth, as relayed in the film about Michael Collins, attributes the actions against the British intelligence network to Collins and a small body of men in the ‘Squad,’ it was a much vaster operation that involved hundreds of Dublin Brigade and Cumann na mBán Volunteers and a tight network of civilian supporters which provided houses, lookouts, bicycles, and even a ferry across the Liffey.

Dominic Price in his excellent history of the Dublin Brigade, We Bled Together, provides probably the definitive logistical description of the IRA action. Piecing together an array of documents and individual accounts, Price details how all four Dublin battalions were involved and names 109 Volunteers who were direct participants along with probably the same number of unnamed Volunteers and not including a large number of civilians. It was a popular action by a military organisation that represented the majority of Irish people who had voted in 1918 to establish the Republic.

My grandmother, Esther Hannon, was 16 at the time and her brother Dan who was an early member of the Squad was interned at the time in Ballykinler. Jack Dunne who was married to her sister Daisy was in charge of the Squad dump at Denzille Lane. The Hannon home on New Row off the Coombe was one of the houses used on the day.

Of the 21 British personnel shot on the morning of November 21, 16 died. A larger number had been identified by IRA intelligence but escaped unharmed through various pieces of good fortune. They had been selected because they were at the heart of the British intelligence operation against the IRA and Dáil Éireann. The IRA sustained several casualties in the shooting but no deaths.

Later that day, 14 people were shot dead at Croke Park when a force of Auxies and Tans exacted revenge on the city for the earlier operation. Indeed it is illustrative of the close links between the cultural and political aspects of the revolution that so many of the large crowd, including at least eight of the players; two Tipp men and two Dubs, were themselves involved in one way or another with the Volunteers, the IRA and Cumann na mBán.

The Dublin goalkeeper Johnny McDonnell of the O’Tooles club which was closely associated with the 2nd Battalion of the Dublin Brigade, had earlier taken part in the killing of two British officers Lieutenants Ames and Bennett at 38 Upper Mount Street.

The best known of the 14 Croke Park victims was Michael Hogan of Grangemockler who was a Volunteer in the 3rd Tipperary Brigade. The main stand in Croke Park is named in his honour.

All of them had their own stories. Jane Boyle was with her fiancé Daniel Byron and they were to be married the following Friday. Instead, she was buried in her wedding dress. Tom Ryan, originally from Glenbrien in Wexford but living in Arbour Hill where he was a member of the Dublin Brigade 1st Battalion, was shot dead while administering last rites to Michael Hogan the Tipperary player killed.

Jerome O’Leary (10), William Robinson (11) and Billy Scott (14) were local lads watching the game as generations of Dublin young fellas did from the vantage points of walls and a tree.

In all, including McKee, Clancy and Clune, 33 people lost their lives that day.

Tipperary were eventually to defeat Dublin in the 1920 All Ireland final, but that did not take place until June 1922, just less than two weeks before the outbreak of the Civil War in which many of those involved on Bloody Sunday found themselves on opposing sides. My grandmother Hannon’s family were out and out Free Staters and remained so somewhat incongruously judging by her own republican views which were hardly those of the likes of Paddy Cooney and Garrett Fitzgerald, other than a common antipathy – to put it politely! – for Fianna Fáil.

On Sunday, Tipperary will wear the Green banded Grangmockler jersey for their Munster final against Cork. They haven’t won a Munster title in football since 1935, nor another All Ireland since the fateful and tragic years of the early 1920s. It would be fitting if a team wearing the same jersey as on Bloody Sunday were to emulate their predecessors.

A ceremony will also be held prior to the throw in on Saturday evening, and the Dublin County Board has released an excellent short film on the events and background of the day that can be accessed through the Dublin GAA website. 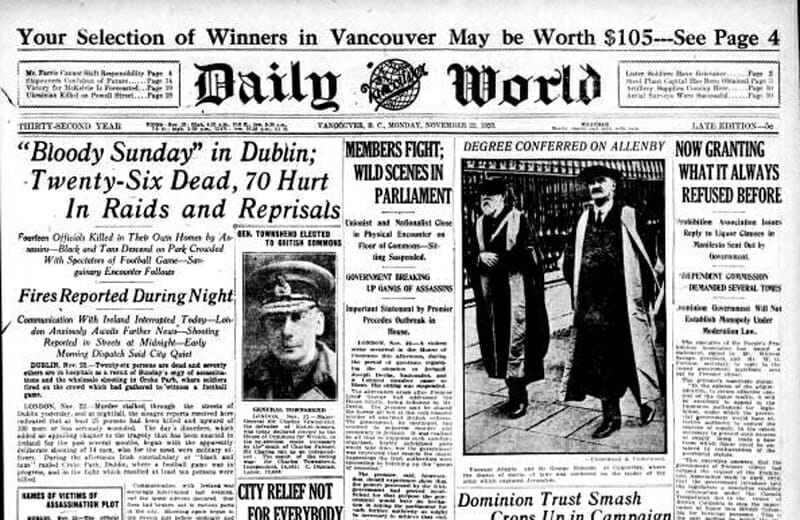 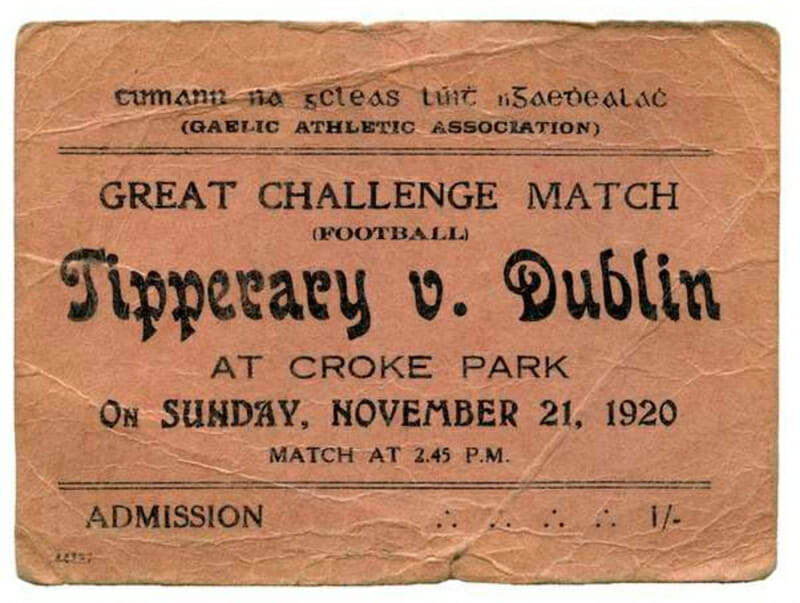