Bad news: Lockdown not going so well in Galway 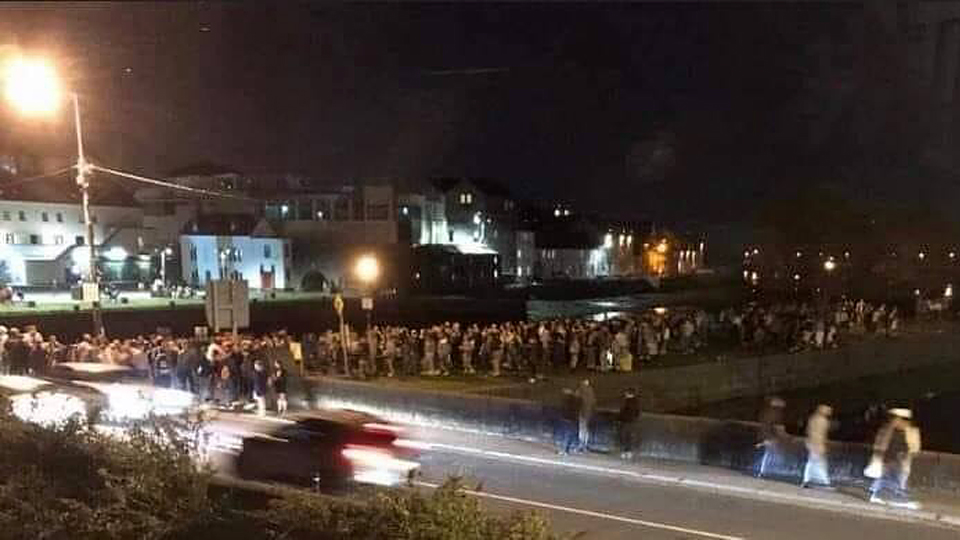 Local Councillor Eddie Hoare here, with photographic evidence that will have them tearing their hair out over in NPHET:

The social media reaction is about what you’d expect. Combine a pandemic that has a lot of people scared with the never-gets-old trope about irresponsible young people and you have the perfect candidate story for social media outrage.

And in truth, there’s a lot to be outraged about. This behaviour is, of course, grossly irresponsible and contrary to the Government’s well-worn advice. It also, frankly, blows a hole in the “Sweden” argument often used by lockdown sceptics.

That argument, basically, goes along the lines that Sweden has accomplished a reasonable level of Covid suppression without the need for draconian legal measures to enforce social distancing. But of course, it ignores what we might term “cultural differences” between Sweden and Ireland.

At a human level, it is understandable. People in their late teens and early twenties are, of course, immortal, or so they believe. “The Covid”, as we call it, isn’t particularly dangerous to the average person of that age.

The problem, of course, is that most of them have grandparents and parents and aunts and uncles and landlords and teachers to whom it may, in fact, be dangerous.

Anyway, between this and everything else, we may as well knuckle down, because Lockdown is going to last for…. Quite some time, it seems:

That is consistent with some receding optimism about the chances of a successful vaccine coming on stream anytime soon. But it’s not very consistent with the scenes in Galway. This is something that policymakers are going to have to come to terms with, sooner rather than later: Lockdown worked the first time because it was a bit of a novelty. As time goes on, people, through some combination of ignorance, courage, or selfishness, are slowly going to lose their fear of the coronavirus, and start going back to normal whether Government likes it or not.

We’re probably beyond that point already, in truth.

And there’s a collective action problem for Governments: What do you do about a few hundred young people having a massive party? We can shout and roar about it on the radio all we like, but what can actually be done? We couldn’t arrest all those people if we wanted to (not that trying to do so would be a good idea to begin with). Collectively, they’re terribly irresponsible. But individually, each one of them probably has some excuse.

Last week, I wrote that we’re approaching the time when Governments will just have to concede that on Coronavirus, it’s every man and woman for themselves:

But ultimately, in a free society, where everybody knows the dangers of Coronavirus, we have to be grown up enough to let people decide the risks for themselves, and weigh up their own actions against the potential costs.

We can’t let the virus kill our capital city, and our country, and our way of life. The Government’s plan this week was called “living with Coronavirus”. We might just have to, you know.

The real victims, of course, are those who can’t make a free choice about how to limit their exposure. These kids in Galway, if they come down with the virus, have only themselves to blame. But what about their lecturers, or the people working cleaning the college canteen, or, if they’re in second level, their teachers?

Everyone else has a free choice in the matter, it seems, except for the people compelled to go to work in close contact with these idiots.

If the University Staff in Galway, or the teachers in Galway’s secondary schools, look at these images and conclude that it’s time to go on strike, would they be wrong? Not in my view, anyway.

Anyway, the Government needs some form of a new plan. Because this one isn’t working. It’s not stopping mass gatherings, but it is strangling the economy.

Come on: “Zero Covid” is a terrible idea.

Prof Luke O’Neill: Unvaccinated could be “excluded” from travel