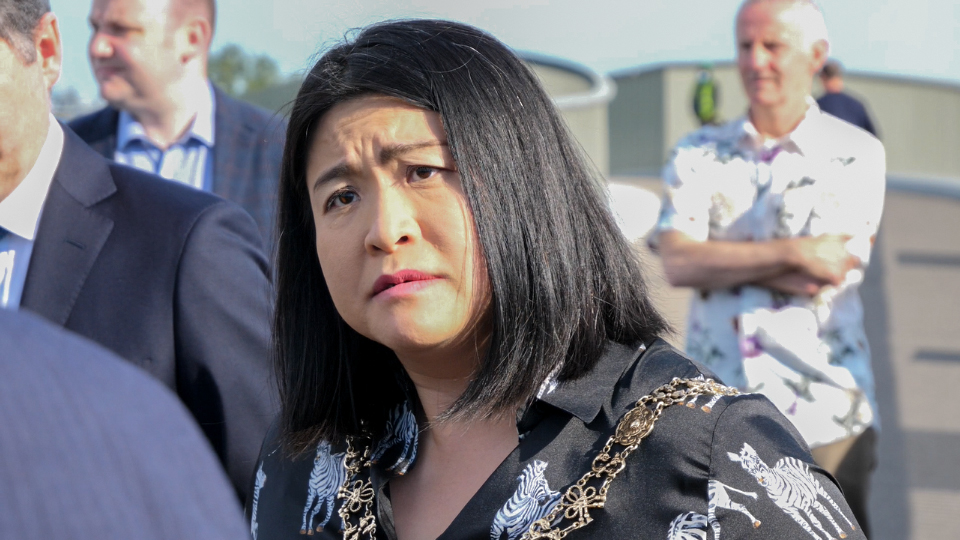 “Diversity is important”, the Lord Mayor said yesterday, as she launched her campaign for the Seanad, in contravention of the wishes of her own party. The Greens weren’t happy, and the parliamentary party met last night to consider a motion of no-confidence in the Mayor as it relates to her other job – Chairwoman of the Green Party.

But that’s not the only problem she faces, sadly. She launched her campaign for the Seanad yesterday in St. Stephen’s Green, and, as eagle-eyed reporter Dan Grennan of the Irish Daily Mail noted (the story isn’t online, otherwise we’d link to Dan’s work), broke the law in the process.

The election launch was a clear breach, though, of the St. Stephen’s Green by-laws, which state:

“No person shall, within the Green, hold or address a public meeting without the permission of the commissioners, or engage or take part in any dancing, theatrical, or musical performance, or operate any radio, cinema, television, or gramophone apparatus”.

Ms. Chu admitted to the Daily Mail that she had not, in fact, secured such permission.

In ordinary times, we might have sympathy, of course, with a politician who inadvertently breaks the rules about holding a public gathering. But these are no ordinary times. This was a self-promotional press conference, calculated, of course, to draw publicity by painting Ms. Chu as a reluctant protagonist in the ongoing Green civil war, forced into standing as an independent simply to defend the rights of women and minorities, who otherwise would not be represented on the ballot paper, thanks to Eamon Ryan’s sleepy endorsement of the FF and FG candidates.

Nor is Ms Chu any ordinary politician. If some councillor from Offaly arrived in Dublin and held an event in contravention of the rules, he or she might be allowed some leeway on the basis that he or she was ignorant of the rules to begin with – much like the friend of mine, who shall remain nameless, who, despite living in Dublin for years, still manages to take illegal shortcuts through the city, and pleads culchie ignorance if accosted by the Gardai.

But Hazel Chu is the Lord Mayor of Dublin. Her official residence is about 45 yards away from St. Stephen’s Green. She has no excuse for not knowing what the rules are.

Anyway, while we’re on the subject, yesterday, it must be said, was a pretty disastrous day for the Chu for Seanad campaign. It has managed (though to be fair, this may have been part of the plan) to split the Green Party down the middle. That’s bad enough – but much worse was Chu’s remarkably foolish commitment to taking the Green Party whip in the Seanad in the very remote chance that she’s elected.

That was an unforced error of immense magnitude, because at a stroke, she took away most of the opposition rationale for voting for her. If you’re a right-on Social Democrat, the case for voting for Chu evaporates if it means voting for a candidate who will take the Government whip. All she’d have to do would be to vote for one budget, and those Social Democrats or Labour or People before Common Sense members who voted for her would end up looking like fools.

What’s more, it’s an error that she only made because she went in front of the press to begin with. Had she simply stayed silent, and had no launch at all, then she could have avoided answering awkward questions like that and told politicians what they wanted to hear.

What was the need to do a press launch at all? The public don’t even get a vote in this election, so talking to them accomplishes…. Not much of anything. Have you heard much from either the FF or FG candidates in this election? Do you even know who they are? They’re probably going to win, though, because they realise who the voters are.

Chu’s been tripped up here, you suspect, by her own love of publicity, and an unfortunate over-confidence in her own popularity. It’s lucky for her that the Stephen’s Green commissioners will probably do nothing about enforcing that law. After all, she’s a Green, and they’re nice. She’s not some enemy of the state holding a public meeting about the lockdown, or anything like that.

Zero Covid Campaigner: Say, what about lockdown until…2023?