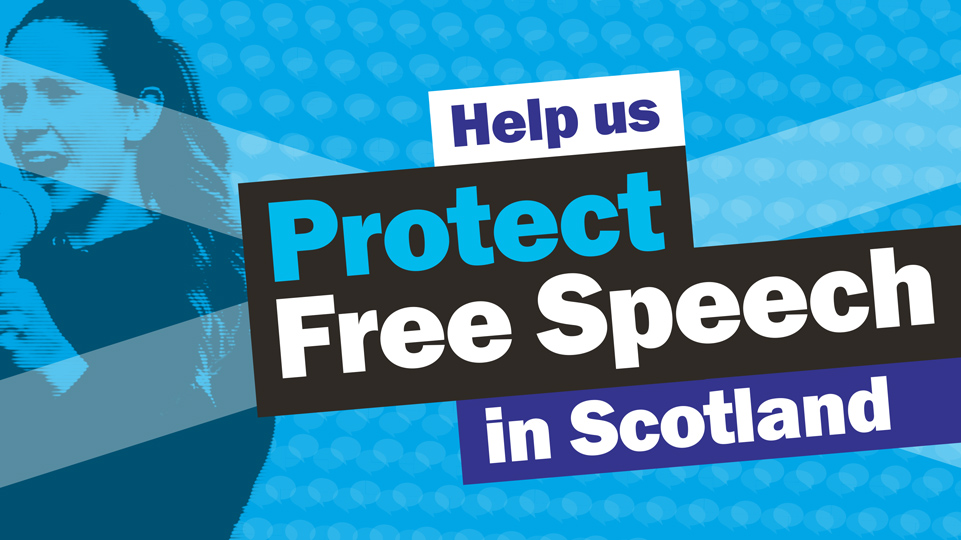 Image from the Free Speech Campaign in Scotland

A Scottish Hate Crime Bill is being met with an “avalanche” of opposition as judges have now joined police and free-speech campaigners to raise concerns over the controversial proposal.

Critics of the Bill say that vague language and a section on “stirring up hate” could be used to stamp down on free speech and criminalise debate.

The Justice Committee of the Scottish Parliament published some 145 submissions from organisations both supporting and opposing the Hate Crimes Bill proposed by the SNP-led government.

However, the crescendo of voices now speaking out against the Bill prompted Scottish Tory justice spokesman Liam Kerr to say that the “avalanche” of opposition could not be ignored. He pointed to the wide and diverse chorus of voices raising concerns about the potentially censorial aspects of the proposal.

“Serious organisations such as the BBC, police chiefs and judges have now joined the vocal opposition to key elements of this Bill,” Kerr said. “Many of these consultation responses share our view that this Bill, as currently drafted, will curtail our fundamental right to freedom of expression.

“This level of substantial criticism cannot simply be waived away or ignored.”

The proposed legislation creates a new crime of stirring up hatred against any of the protected groups covered by the bill, which include race, religion, sexual orientation, and transgender identity.

The “stirring up hatred” could be either “with the intention” of doing so, or “where it is a likely consequence that hatred will be stirred up against such a group”.

In its submission, the Scottish Police Federation said the bill “appears to paralyse freedom of speech in Scotland” and “could lead to police officers determining free speech and thereby devastate the legitimacy of the police service” and that it had regulations “too vague to be implemented”.

The federation’s general secretary, Calum Steele, said: “We do not for one second suggest that prejudice, racism or discrimination are desirable qualities in our society but the need to address those matters when they reach a criminal level is met by laws already in place and the cost to free speech of going further with this bill is too high a price to pay for very little gain.”

The Law Society of Scotland said that with its imprecision, the bill “presents a significant threat to freedom of expression, with the potential for what may be abusive or insulting to become criminalised”.

The Sheriffs’ Association said the laws were drafted could lead to problems in court. There is no definition of what amounts to “insulting” behaviour, they said, noting that a sheriff, judge or jury deciding a case will have to work out whether they are satisfied beyond reasonable doubt the person’s behaviour would have been likely to stir up hatred.

“It is submitted that these concepts should not be conflated. It will be exceptionally difficult to direct a jury on these matters,” they warned.

Judges raised serious concerns about the confusion that could arise where juries are asked to consider the “likelihood” of someone’s intention to stir up hatred.

The Senators of the College of Justice said: “It is easy to envisage circumstances in which offences covering the stirring up of both racial and religious hatred will arise from the same circumstances, and require a sheriff to apply, or a jury to be directed on, two different tests.”

The Association of Scottish Police Superintendents said existing legislation is adequate on “stirring up hatred”, echoing concerns already raised by the Scottish Police Federation about curbs on freedom of speech.

The Faculty of Advocates, representing lawyers, supported the principle of the Bill but warned of a “chilling effect” on freedom of expression.

Legal experts were also joined by the media and by writers in expressing concern.

In its submission, the Scottish Newspaper Society said that the legislation “poses a serious threat to freedom of expression in its broadest sense”.

“We fully appreciate the good intentions which lie at the heart of the legislation, and we certainly welcome the abolition of the offence of blasphemy, but that is overshadowed by what we feel are some highly dangerous measures in the rest of the legislation and we have grave reservations about the considerable risks to freedom of expression they represent,” they said.

Meanwhile, Scottish bishops expressed concern that the bill “creates an offense of possessing inflammatory material which, if taken with the low threshold contained therein, could render material such as the Bible, the Catechism of the Catholic Church and other texts such as Bishops’ Conference of Scotland submissions to government consultations, as being inflammatory under the new provision.”

Critics of the measure have asked if famed author JK Rowling could be a target of the legislation if she continued to express the view that a woman is a person born with a vagina or for questioning the impact of trans activism on women’s safety.

The rising opposition to the Bill has led Justice Secretary Humza Yousaf to acknowledge that he will consider whether changes need to be made to the Bill.

However, champions of the bill said the legislation will protect vulnerable people. Victim Support Scotland added: “The Bill makes hate crime and its impact on individuals, and the wider communities they are part of, visible.

Culling in the care homes? The right to die – if you haven’t already died of Covid