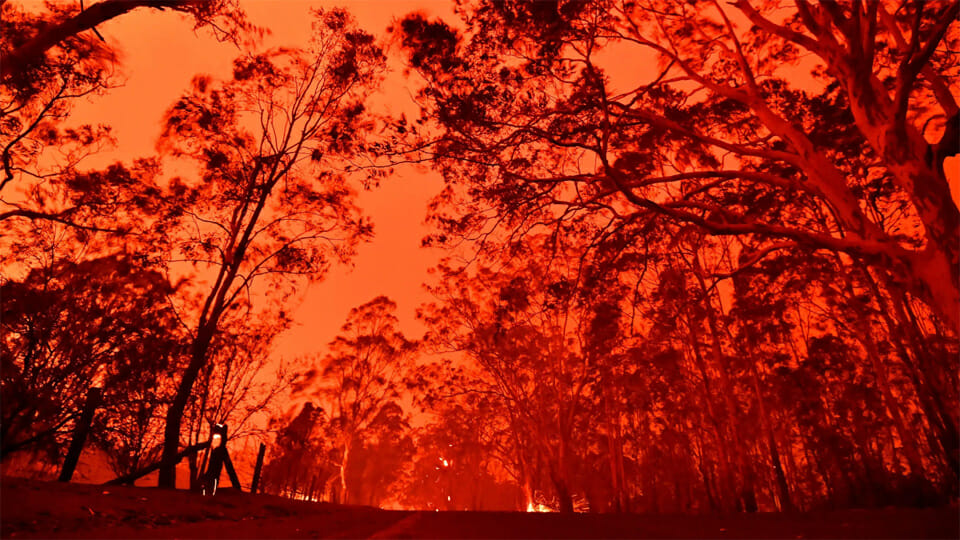 There’s nothing more terrifying than fire. And Australia is being burnt to a crisp. Across the continent, particularly in the coastal region on the eastern seaboard between Sydney and Melbourne, the scenes are apocalyptic. In the air, gigantic plumes of smoke drift thousands of kilometres across the Tasman Sea, covering glaciers in New Zealand with layers of soot. On the ground, trees, houses, whole towns are being consumed by infernos. Millions of hectares have been burned.

On the beach at Mallacoota, a small fishing and holiday village, a thousand people huddle, waiting for the Australian Navy to evacuate them. About 20 people have died, including three young firefighters. The Army Reserve has been called out.

Back in 1959, Hollywood starlet Ava Gardner starred in an Australian film about a nuclear holocaust. “On The Beach is a story about the end of the world, and Melbourne sure is the right place to film it,” she reputedly told the press. Sixty years later, Australia is offering a sneak preview of the coming climate holocaust.

All over the world, journalists and politicians are pointing to the terrifying fires Down Under as confirmation of their worst fears about climate change.

“Apocalypse will become the new normal” because of man-caused climate change, says Paul Krugman, the Nobel laureate, in his New York Times column. Australia’s inferno is “only a small taste of the horrors that lie ahead”.

Another expert, Greta Thunberg, tweeted, “We still fail to make the connection between the climate crisis and increased extreme weather events and nature disasters like the #AustraliaFires. That’s what has to change. Now.”

Australia’s bushfire season has become a new front in the climate wars.

But observers overseas (and in Australia) are being too hasty in fitting the fires into the politics of a global climate crisis. There are three things everyone should know before loyally retweeting Greta Thunberg’s detailed research into the issue.

First, there are vast fires in Australia every summer. The continent’s sunburnt landscape has been shaped by fire for tens of thousands of years.

Hunter-gatherer Aborigines “domesticated” their land by setting it ablaze, generation after generation. After a fire, grass would grow, kangaroos would thrive and the Aborigines would feast. “Smokes by day and fires in the night,” reported Captain James Cook as he sailed along the east coast in 1770.

One of the early explorers, Thomas Mitchell, wrote in 1848 that “Fire, grass and kangaroos, and human inhabitants, seem all dependent on each other for existence in Australia, for any one of these being wanting, the others could no longer continue.”

Second, killer fires happened regularly, long before there was a climate crisis. In 1851, fires across 5 million hectares killed 12 people and a million sheep in the colony (as it was then) of Victoria. The intense heat was felt 30 kilometres out at sea. In 1926, 31 people died near Melbourne. In 1939 71 people died and 650 houses were destroyed in Victoria.

In 1967, fires in Tasmania levelled 1,300 homes and killed 62 people. In 1983, 75 people died in the terrible Ash Wednesday fires with nearly 1900 homes destroyed. The worst fires in Australian history happened in 2009 in Victoria. As in this year’s fires, there was a lethal combination of drought, high temperatures and strong wind; 173 people died and 2000 homes were lost.

Third, although the climate does seem to be changing, there are many factors which make fire management a very complex problem.

For one, there’s a lack of skilled manpower. It’s becoming impossible for exhausted firefighters to cope. Most of them are volunteers – highly trained, but volunteers. This is a long-established Australian tradition. But these men are ageing and fewer and fewer people are joining local bush fire brigades.

Zoning laws also need to be re-examined. Australians like to live in cottages in suburban block rather than inner-city apartments. So developments push deeper and deeper into the bush as people look for settings close to nature. For most of the year, it is idyllic, but when bushfires come, it can be hellish. Lives and houses will inevitably be lost.

But the most important and controversial factor is “fuel load”. Fallen branches, leaf litter, undergrowth, grass and trees killed by previous fires accumulate in the bush, creating fuel for the next fires. In the 1950s and 60s governments used to conduct regular hazard reduction fires in the winter months to reduce this fuel load in the summer months.

But this is smoky, dirty and uncomfortable for suburbanites. Under pressure from the green lobby, prescribed burning was gradually restricted to areas where reserves bordered housing developments or agricultural land. As a result, in those unburnt areas, the fuel load grows and grows — until it explodes into the intense summer fires we are seeing now.

After the disastrous 2009 fires in Victoria, a government inquiry found that “Ironically, maintaining pristine forests untouched by fuel reduction can predispose those forests to greater destruction in the event of a bushfire.” Experts have estimated that “Doubling the available fuel usually doubles the rate of spread of the fire and increases its intensity fourfold.”

Failure to burn off is a crime, says journalist Miranda Devine. “The real culprit is green ideology which opposes the necessary hazard reduction of fuel loads in national parks and which prevents landholders from clearing vegetation around their homes.”

In an open letter late last year, Vic Jurskis, a fellow of the Institute of Foresters of Australia, which represents 1200 forestry professionals, wrote:

“Instead of wasting billions of dollars on ineffective waterbombers, silly computer models and hugely expensive emergency bureaucracies which are rewarded with increased funding after every disaster, we need only spend a miniscule fraction on reinstating frequent mild fire and safe and healthy landscapes.”

As an expert in the history of bushfires, Dr Christine Finlay, told the New South Wales Parliament,

“Pre-1788, naked Indigenous Australians managed the bush with no boots or even a box of matches. They taught early settlers these skills and oldtimers still remember a fuel-reduced firestorm-free past that cost the whiff of an oily rag.”

University of Tasmania fire expert David Bowman acknowledges that climate change has accelerated the danger of fires, but that the conditions for catastrophic fires have always been there. “All of these problems already existed. All climate change is doing is accelerating them and amplifying them.”

After the fires have died down, there will be an investigation – probably several investigations – and abundant opportunities for finger-pointing and grandstanding. Politicians will have to take a stand on whether the fire apocalypse was due to climate change or to bad management.

Controlling Australia’s fire seasons is shaping up as more of a political problem than an ecological one. The real question is whether politicians will have the guts to resist making virtue-signalling gestures about the climate crisis and to confront the green lobby over fuel reduction.