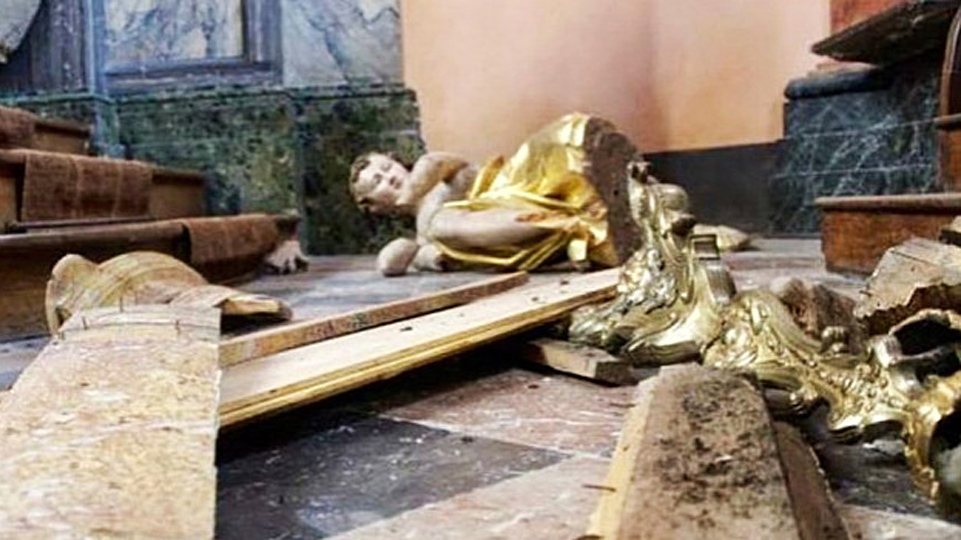 Saturday’s arson attack on the Cathedral at Nantes whose construction began in the 15th century has taken place amid an escalating series of anti Christian violence and desecration. A person has been arrested but it is too early to attribute any definite motive. No-one was arrested or charged following the April 2019 burning of Notre Dame in Paris.

Nantes has once again highlighted the huge increase in attacks on religious, and particularly Catholic, buildings, cemeteries and other sites in recent years. Such incidents are at four times the level at which they were in 2008.

The French Ministry of the Interior recorded over 1,000 “anti Christian” attacks in 2018 and there were a further 228 violent actions in the first three months of 2019. The most horrific incident was the murder of the Reverend Jacques Hamel who was stabbed to death during Mass at St-Etienne-de-Rouvray in July 2016 by Islamists.

There is a perception that the scale and nature of the attacks have been downplayed by liberal politicians and media. Le Monde has been particularly keen to dismiss any ideological motive behind the attacks.

The Catholic hierarchy’s timid response has added to that. In 2019 Archbishop Pontier of Marseilles made it clear that “we do not wish to complain.” Others have been less reticent. The mayor of Lavour Bernard Carayon expressed outrage at both the attacks and the official silence: “The Church pardons. Not me.”

Although radical Islamists have been responsible for some of the worst attacks, the International Theological Institute which compiled a report on the attacks in France and elsewhere pointed to the involvement of leftist and LGBT activists as a factor in the growth in anti Christian vandalism.

Pierre Manent, one of the most trenchant critics of the loss of French national identity and the “European  fantasy,” has attributed the lack of reportage and concern to the political bias against Catholicism which is regarded as an “obstacle to contemporary life.”

The Gatestone Institute puts a figure of around 3,000 on the number of religious sites targeted throughout Europe in 2019 with Ireland being noted as a country in which they are increasing. The Theological Institute lists a number of incidents here in 2019, the most serious being the burning of the Ballymagroarty Holy Family Church in May last year.

There were 400 attacks on religious targets in Ireland between 2017 and 2019. While most were directed at Catholic buildings and cemeteries and there is an ongoing loyalist element in this, the attacks have increased in line with other European countries. Loyalism was obviously not the motivation for incidents in Longford, Dublin, Tipperary, Louth and elsewhere.

Attacks on religious sites have significantly increased in tandem with the current leftist nihilism in the United States. The Ancient Order of Hibernians has noted the ignoring of attacks by media outlets such as CNN and the anxiety of others to disclaim any association with Black Lives Matter.

That link is quite clear. The San Gabriel mission in Los Angeles was burnt down on July 11th following a number of attacks on statues of St. Junipero Serra, who was one of the founders of the 250 year old mission. Serra had been accused of racism against the indigenous population despite his having defended them against the Spanish authorities.

One of BLM’s most prominent social media provocateurs is Shaun King who has called for the destruction of “statues of the white European they claim is Jesus,” as a symbol of white supremacy. King is a former pastor whose self identification as a black person appears unclear as his birth certificate lists as his biological parents a white mother and father.

Globally, anti religious repression has been increasing for the past decade and more. African Christians are being slaughtered by Islamists,  there have been similar attacks in Pakistan, India and Sri Lanka; and the Chinese state since the accession of Xi to the leadership of the Communist Party in 2012 has reverted to the more brutal measures that were common under Mao.

While the regime had for some time been content with incorporating “official” Christian and Buddhist bodies, it has for the past number of years returned to the destruction of Christian churches, and most notoriously organised the ongoing genoicide against the Uighur muslims. The Falun Gong have also been the victims of brutality.

What the Chinese Communists and the western ultra left share is a common ideological origin for their violent atheism. Marx hated all religion and developed an extreme hatred for his own Jewish heritage. But while he did not have the means to enforce his views through terror, his proteges did.

In 1905, Lenin stated that “Everyone must be absolutely free to profess any religion he pleases.” Once in power, however, the Bolsheviks banned all religions in 1918 and by the early 1920s Lenin and Trotsky had agreed on a policy of confiscation or destruction of Orthodox Christian churches and monasteries, one of which on Solovetsky island became the location of one of the first prison camps of the Gulag. They also murdered thousands of Orthodox priests and monks.

Totalitarianism cannot tolerate dissenting views. It is particularly intolerant of those which reject its insistence that the state and the party have a monopoly on the truth, or what they wish to convince people is the truth. And more importantly that there is no alternative conception of life. Which is why religion and non materialist philosophies are regarded as deadly enemies.

The nihilism of the American ultra left and their imitators may simply appear to be mindless vandalism. Most of the participants are stupid people attracted by the opportunity to steal and harm others under some flimsy veneer of ideology. So too were most Brownshirts, Chinese Red Guards and Chekists. They are also the carriers of a contagion that threatens all forms of civilization, religion included.

All of that might appear overly dramatic but it would be a mistake to dismiss the threat. It is certainly not the time when we should be intimidated by those whose 1960s incarnation Solzhenitsyn dismissed as “pampered n’er do wells”; the ideological inheritors of the degenerates like Kojeve – described by Roger Scruton as a “psychopath” – Bataille and Foucault who created a cult of violence and amorality disguised as social liberation.

Western traditions including its religious heritage need to be defended as part of the preservation of freedom which is once again under attack.

DR. ANGELO BOTTONE: A debate on how to tackle a shrinking population is long overdue