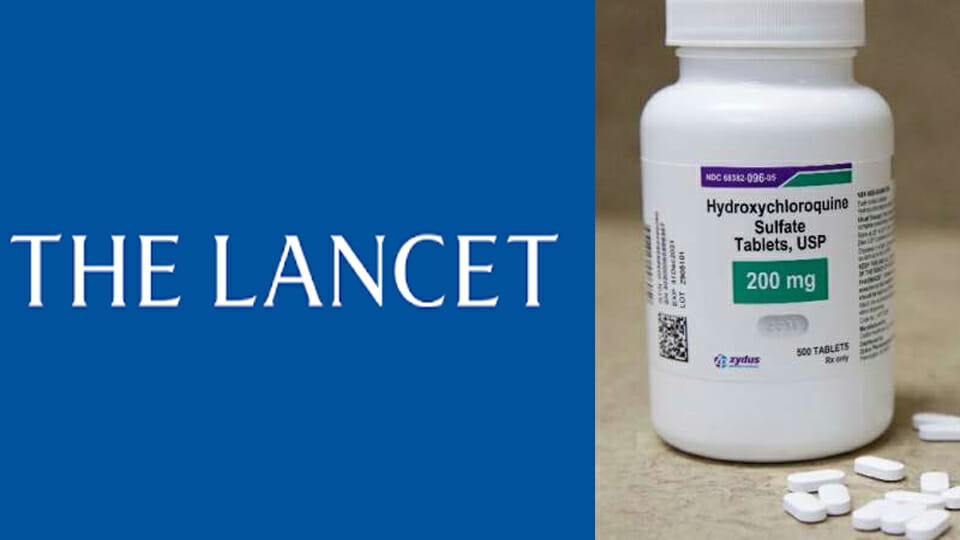 The study, published in the prestigious peer-reviewed journal the Lancet, made headlines everywhere from the Irish Times to the Washington Post, especially in media platforms anxious to strike a blow against PresidentTrump, which, let’s face it, is almost all of them.

Hydroxychloroquine – the drug hailed by President Trump as a ‘game-changer’ in the coronavirus pandemic  – wasn’t just ineffective against covid-19, it was also dangerous and increased the risk of dying, reported the media. Specifically, they claimed  that this important and “powerful” study showed that the drug actually raised the risk of heart failure and death.

It was described as a “landmark” piece of research “undertaken with stringent and meticulous analysis” and it led to many governments and the World Health Organisation changing their policies on the use of the drug. Clinical trials were cancelled, and some governments banned the use of Hydroxychloroquine

A few observers noted that this was an observational rather than a controlled study, but that concern was mostly glossed over. Very few media outlets, with some exceptions including Matt Treacy on this platform, noted that the drug had been safely used under medical supervision for decades for the treatment of malaria, lupus and other conditions.

To most of the media, it seemed, the failure of hydroxychloroquine was also the failure of Trump, and therefore something to be welcomed. The tone of CNN and many others was very close to crowing, as they asserted that Trump was wrong and that the drug was dangerous and to be avoided in treating Covid-19.

Now it turns out the data the study was based on was massively flawed, and might be faked. This is an absolute disaster for the credibility and the integrity of the peer-reviewed journals involved, but it also has wider implications and raises important questions as to the politicisation of science and medicine.

Published on May 22nd in the Lancet, and making news headlines in jig time, the study claimed to have done “a multinational registry analysis of the use of hydroxychloroquine or chloroquine” based on data from 671 hospitals in six continents, examining a total of 96,000 patients, with some 15,000 being treated by anti-malarial drugs.

That data was supplied by a relatively unknown company U.S. healthcare analytics company Surgisphere based in Chicago. The company didn’t release information on the medical centres that provided the data for the study, which should have rung some alarm bells, and neither did they show what code was used to analyse such large amounts of data, as is standard practice.

Surgisphere, according to an investigation by the Guardian, only had a handful of employees including a “science fiction writer and an adult-content model” but it had managed to be accepted as a data provider for multiple studies on Covid-19 – with its Chief Executive, Sapan Desai, listed as co-author not just on the Lancet study, but on others including one published in the equally prestigious New England Journal of Medicine.

Some scientists did subject the study to scrutiny with 120 researchers eventually signing an open letter raising “both methodological and data integrity concerns” –  including data incompatibility and an “inadequate adjustment for known and measured confounders  such as “disease severity, temporal effects, site effects, dose used”.

Those concerns went largely unreported in the media however, in comparison to the wall-to-wall press reporting of the finding (now considered to be based on fake data) that hydroxychloroquine was dangerous. Was it a case of the media wanting the study’s findings to be correct because it suited their political leanings? Even more seriously, did similar considerations affect the judgment of the peer-review process of the Lancet and The New England Journal of Medicine?

A key question for the media and for the peer-reviewed journals involved is the politicisation of science and medicine in an increasingly polarised world. Where were the normal checks and balances which ensure that peer-reviewed studies are subject to rigorous scrutiny and therefore are credible?

The Guardian says its investigation has now uncovered the following regarding Surgisphere:

A search of publicly available material suggests several of Surgisphere’s employees have little or no data or scientific background. An employee listed as a science editor appears to be a science fiction author and fantasy artist. Another employee listed as a marketing executive is an adult model and events hostess.

The company’s LinkedIn page has fewer than 100 followers and last week listed just six employees. This was changed to three employees as of Wednesday.

While Surgisphere claims to run one of the largest and fastest hospital databases in the world, it has almost no online presence. Its Twitter handle has fewer than 170 followers, with no posts between October 2017 and March 2020.

Until Monday, the “get in touch” link on Surgisphere’s homepage redirected to a WordPress template for a cryptocurrency website, raising questions about how hospitals could easily contact the company to join its database.

Desai [the company’s CEO] has been named in three medical malpractice suits, unrelated to the Surgisphere database. In an interview with the Scientist, Desai previously described the allegations as “unfounded”.

In 2008, Desai launched a crowdfunding campaign on the website Indiegogo promoting a wearable “next generation human augmentation device that can help you achieve what you never thought was possible”. The device never came to fruition.

The investigation was prompted when the Guardian Australia noted that the study claimed researchers had access to data through Surgisphere from five hospitals, recording 73 Australian deaths from the coronavirus as of 21 April – but only 67 deaths had actually been recorded as at that date.  The newspaper “then contacted five hospitals in Melbourne and two in Sydney, whose cooperation would have been essential for the Australian patient numbers in the database to be reached. All denied any role in such a database, and said they had never heard of Surgisphere.”

Now the Lancet has issued an ‘Expression of Concern’ saying “important scientific questions have been raised about data reported in the paper” and has ordered an audit of same. The New England Journal of Medicine has issued a similar notice.

When the Lancet study was published, French drugmaker Sanofi was one of many to announced that trials of hydroxychloroquine for treating Covid were being halted – and the company also said it would stop releasing the drug for off-label use in Covid-19 until current safety concerns were cleared by WHO.

As Peter Horby, professor of emerging infectious diseases and Global Health in the Nuffield Department of Medicine, University of Oxford, said this week: “The Lancet publication by Mehra et al has had major adverse impacts, resulting in the suspension of numerous well-designed clinical trials. This is completely unjustified”.

Nicholas White, a malarial researcher and co-investigator on a hydroxychloroquine trial, told the Science  Times  that damage has been done – saying that due to “headlines all over the world broadcasting that the antimalarial drug is harmful” the problem is that “the world now thinks that the drugs are poisonous.”

The WHO now says it will resume its global trial of hydroxychloroquine, and governments are rowing back its restrictions on the use of the drug. Of course, that delay may have led to the loss of lives and the denial of beneficial treatment. Along with the truth and scientific credibility, those are the inevitable consequences of the politicisation of medicine and science.

Shuffling off this mortal coil is not always pleasant

Pope to Cardinals: Time for a Pay Cut, chaps