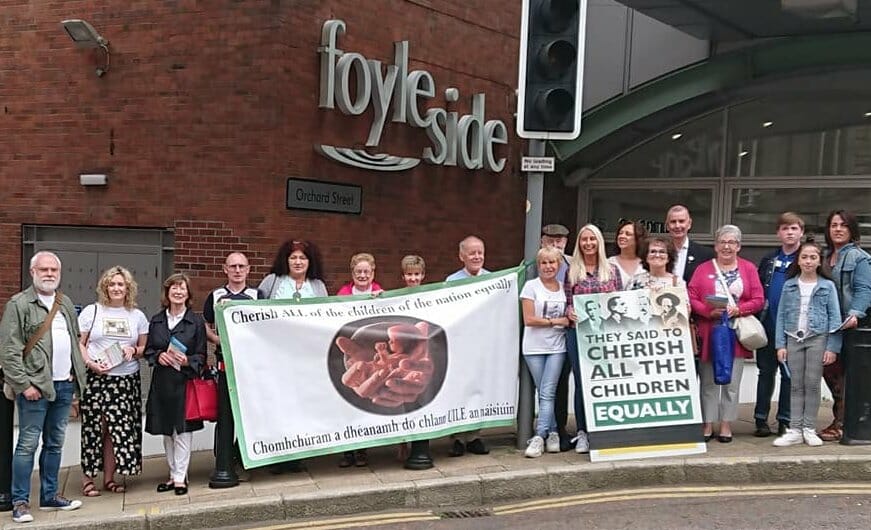 Aontú have accused Sinn Féin of working with British MPs to contravene the Good Friday Agreement, and says the party is now happy to have Westminster impose legislation on the north of Ireland.

Deputy leader of Aontú, and councillor Derry & Strabane, Dr Anne McCloskey made the criticisms of Sinn Féin at a event organised at the Foyleside in Derry on Saturday.

She said the event aimed to highlight the “imposition of an extreme abortion regime by English, Scottish and Welsh Members of Parliament on the north of Ireland”.

“They don’t take their seats in the ‘mother of parliaments,’ because they claim to want Irish self- determination. But they are happy to use English, Scottish and Welsh proxy votes to impose their agenda here in the north,” she said.

The Aontú spokeswoman says that abortion has always been recognised as a devolved issue, and accused Westminster of acting in contravention of the Good Friday Agreement.

“This legislation will result in the ending of all legal protections for the smallest and most defenceless fellow humans – the unborn,” she asserted. “Abortion law is a devolved issue. “This legislation severely undermines the Good Friday Agreement and makes a mockery of any semblance of commitment on London’s part to devolution.”

“If Westminster’s abortion legislation comes into effect on October 22, as feared, the north of Ireland will go from being one of the safest places for babies in the womb to one of the most dangerous.”

In a recent debate in Derry Council, Dr McCloskey said that abortion disproportionately affects the poor, ethnic minorities, the disabled and those who have low socio-economic supports.

“Abortion not only takes the lives of the youngest, it has significant physical and psychological consequences for mothers also,” she said. “Abortion reduces pressure on the establishment to provide structural, social and material supports for mothers and pits women against the next generation.”

A major rally, organised by Precious Life and other pro-life groups and dubbed as a ‘March for Their Lives’, will be held in Belfast on September 7th opposing the legislation and calling upon Sinn Féin to oppose direct rule on the issue.