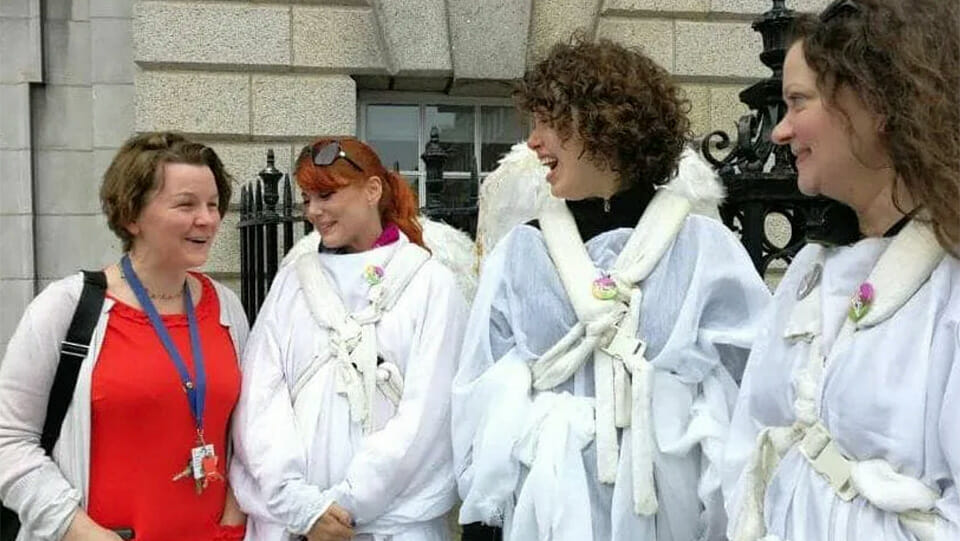 Photo shows Dr. Mary Higgins with abortion rights protestors at a Maternity Hospital in Dublin during the campaign to repeal the 8th amendment

Dr. Mary Higgins, a consultant at the National Maternity Hospital, has been criticised after photos emerged of her standing at a 2018 protest of “Abortion Angels” outside the building where she condemned a group of pro-life protestors for congregating yesterday.

Higgins had posted videos of pro-life protestors praying outside the hospital on the anniversary of last year’s abortion legislation, asking in her tweet for the introduction of exclusion zones to prevent such demonstrations occurring again.

The photos with abortion campaigners re-surfaced today however, prompting some commentators to question her opposition to protests outside the hospital:

You’d no problem with this protest #hypocrite pic.twitter.com/sVChqy2kVZ

You.. @mairenihuigin .. happily supporting ProAborts outside maternity hospital. Not worried about mothers to be that day, were you ? pic.twitter.com/GkNXz2THXb

Minister Simon Harris and Senator Catherine Noone, who had both echoed her condemnation of the pro-life protesters, did not issue a statement on her apparent support for the ‘Abortion Angels’ demonstration.

At the time of publication, Dr. Higgins had not responded to questions about her views on demonstrations by abortion campaigners that commentators claim could upset patients who have lost babies.

Similar demonstrations by abortion campaigners also took place outside the Rotunda hospital in 2018: