Closer Look at NGOs: The Lords of Housing – Novas 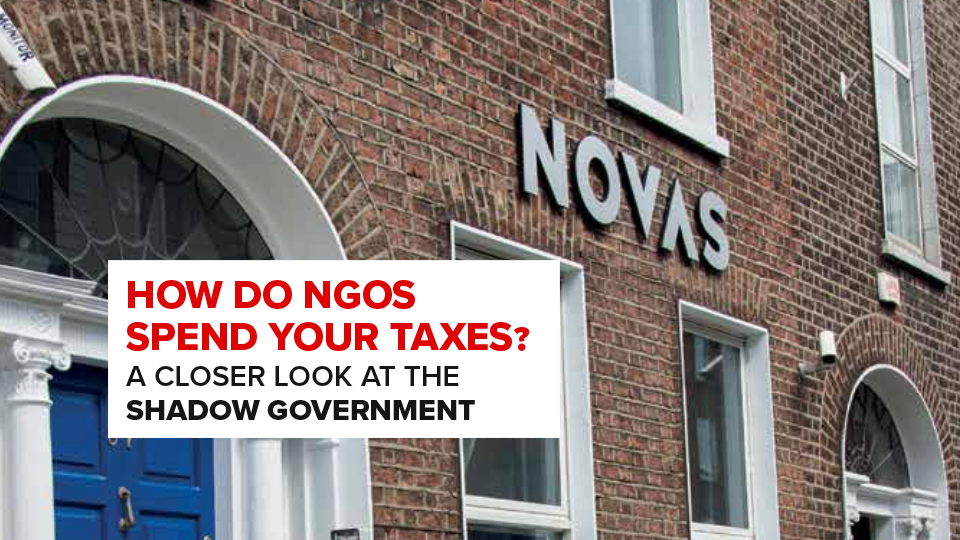 Even with the current Covid panic, the issue of homelessness continues to exercise many. The current estimate stands at around 10,000 people homeless in Ireland, of whom almost half are in Dublin. The exact criteria for such a determination is somewhat vague, but even so, many people are finding it difficult to get a home of their own.

A report by EY-DKM Economic Advisory illustrates that the current level of new builds is inadequate to meet the projected growth in demand, There were 21,000 new builds in 2019, and just 17,000 to date in 2020. The target is 36,000 new builds every year if the population growth largely driven by immigration in Project 2040 is to be met.

Huge amounts of taxpayers’ money has been invested in tackling the housing problem through a plethora of Non Governmental Organisations. They have access to a significant part of the €2.6 billion public housing budget, Many of the housing groups are local housing associations operating on a small scale, and larger organisations which are dedicated to providing housing for the elderly and those with intellectual and physical disabilities. Such groups do sterling work and the latter pre-date any notion of an NGO sector as we now know it.

How effective the major housing and homelessness NGOs have been is another question. We shall be examining that in greater detail in the coming weeks, and begin with a look at one of the larger NGOs, Arlington Novas.

Arlington Novas is based in Limerick City and was founded in 2002 and incorporated in 2000. It originated in a British NGO, Novas Scarman, more of which anon. We twice contacted Arlington Novas with a list of questions regarding the company and its origins and connections and operations but they did not respond.

According to its reports, Arlington Novas is committed to providing “holistic, long-term solutions,” to homelessness, driven by the values of “equality, diversity, dignity, self-determination,,” and is “strengths based, rights based.”

The state, mostly through the HSE, local authorities and the Dublin Region Housing Executive provided €8,687,151 of their income. That amounts to 85% of total revenue. Despite their references to the importance of voluntarism and fundraising, donations accounted for just under 2% of income in 2018.

Novas are one of 25 Approved Housing Bodies (AHBs)  that are currently allowed to borrow from the Housing Finance Agency. That represents a massive source of state funding apart from money they get through other state agencies. Novas are one of 7 Category 2 AHBs and in total the 25 AHBs borrowed €634m in 2019. The HFA has a loan book of €4.64 billion to AHBs and local authorities. We shall be examining their role in the housing and homelessness sector in a later article.”

So what do they do with it all? In 2018, according to Novas’s Annual Report they were responsible for the management of 110 tenancies. In Limerick and other counties mostly in Munster they lease houses from the local authority which are then sub-let to their clients.

They earned €1.6 million from accommodation charges and rent. They also offer their services to private landlords who let houses and apartments to Novas clients as a management and rent collection agency. Novas manages the Abigail Centre in Finglas where two women tragically lost their lives in July.

The cost of administration in 2018 was €9,727,457, of which €7,147,626 was accounted for by staff related payments. Novas CEO Michael Goulding, received a salary of €83,008. The NGO says is also provides supports to children and to families, but they emphasise that most of their programmes are powered by volunteers despite the 230 full and part-time staff. It terms of administration costs, it seems like a lot of buck for a little bang.

Were their income and net assets to be divided between their 110 tenants, they each could have €152,000 towards purchasing a home – which would certainly be sufficient to get on the property ladder in Limerick according to Daft.ie.

Even more startling is the taxpayer cost per tenancy: with income of almost €8.7 million in 2018, the cost to the taxpayer for providing each home for the year was almost €79,000 per tenancy. That does not seem like good value or an effective use of taxpayer funds. Novas will argue that they provide other services, but their primary focus, and their mission, is to provide housing.

The Chairperson of the Board of Directors is Greg Maxwell, former general secretary of the Union of Professional and Technical Civil Servants, since merged into IMPACT. Maxwell was sacked as CEO of Dublin Simon in 2004 during an acrimonious internal dispute over policy. Maxwell was also on the board of The Wheel. In his introduction to the 2018 Novas annual report, Maxwell stressed the importance of “social solidarity.”

The British parent company was certainly social. Novas had merged with the Scarman Trust in 1998 in the UK, and was investigated by the Tenant Services Authority in 2008 over financial irregularities which included hidden income and payments and the use of credit cards to fund personal spending by higher staff, including hotel rooms and, it seems, the purchase of art. (The Pavement, September 26, 2009.)

Novas Scarman’s housing operation was disbanded in 2011, and it then re-invented itself as a new charity ‘People Can’. Novas Scarman now appears to operate as a legal agency. The CEO of People Can was a chap called Maff Potts whose previous experience had included acting as Policy Advisor in the Department of Communities and Local Government under New Labour.

Potts had been CEO of Novas Scarman, although he no longer mentions this on his Linkedin profile, and they were approved for grant aid by his old Department Minister Hazel Blears in April 2009. He became CEO of People Can which itself came to an ignominious end in 2012 when placed in administration with a pension fund shortfall of £17 million.

Not to be deterred in his desire to serve, Potts went on to become CEO of another NGO, ‘The Power to Change’ which was started with a large grant from the Big Lottery, and then founded ‘Camerados’, which seems to be a kind of touchy feely pop psychology outfit, in 2015.

While the details of how Novas Scarman came to establish an Irish company are not clear, there was a direct connection between the original board of directors here, and the UK parent body. Indeed two of those who were appointed when Arlington Novas began operations in Ireland in 2002 were later involved in the controversy that was exposed by the leaked report into the finances of Novas in Britain in 2009.

Maria Donoghue Mills resigned as Novas Scarman CEO in January 2010 as the group continued to feel the impact of the scandal. She was on the board of Arlington Novas Ireland from 2002 to 2005, as was Michael Wake who was one of those at the centre of the claims regarding the misuse of funds.

In 2005, Novas Scarman sold 11 hostels in the UK for £14 million which was to match funds from the state of £12.8 million. However, the money was no longer available as Wake admitted that it had been largely used to cover “other costs.” This led to their handing over of their flagship Arlington House hostel and conference centre in 2008.

The main costs appear to have been connected to the building and fitting out of a Malaysian arts centre and a Chinese theatre in Liverpool. As part of that Wake and another Novas staff member stayed at a $585 a night hotel resort in Malaysia while there to acquire art work and authentic furnishings (insidehousing.co.uk, July 24, 2009)

Another of the founding directors, Joe McGarry, was also part of the irregular payments controversy, although it wasn’t stated that he had requested them. McGarry is still on the board of directors here. A leaked 2008 BDO confidential report concluded that Wake and Donoghue Mills had been guilty of misconduct (BDO report, December 15, 2008.) Wake was let go with a substantial redundancy payment and the group tried to keep the report quiet.

None of that of course reflects on the current members of the Arlington Novas board, nor any of its employees. It does however surely raise a number of questions, the first being why a basically failed British homeless charity ought to have been facilitated in establishing itself here.

It is clear that the group would only have been able to set up with the aid of substantial state funding. It has obviously used that to build an impressive portfolio of tangible assets and to employ a large number of people. That, however, is not part of its stated mission.

It’s actual impact in that respect, in terms of providing new homes. is questionable. Especially given that it basically takes over and manages locally authority houses which are there anyway and already built and paid for by the state.  It also seems to include among “its” tenancies, properties that are owned by private landlords for whom it secures tenants and then provides management services.

Is this then a good way for the Irish state to address homelessness? Or is it content to preside over the sort of “social entrepreneurship” that characterised the sleazy Blair years in Britain that launched so many of them?

Perhaps the old fashioned charity much despised by the woke NGO lifers was a better means of helping those without a home?

A Closer Look at NGOs: who is spending your taxes and what are they achieving?