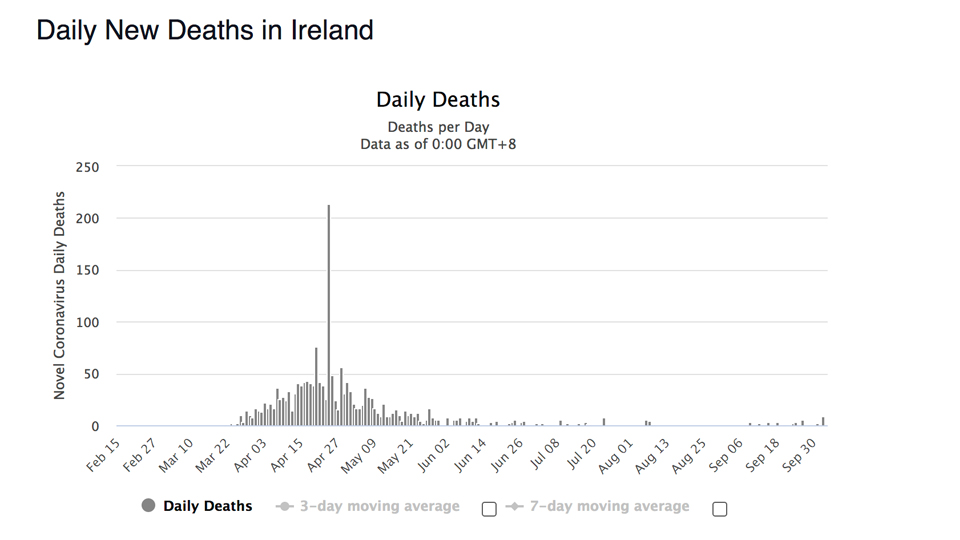 Last night we heard that NPHET is recommending that a full Level 5 lockdown be implemented, which caused the head of the HSE, Paul Reid, to say that while there were concerns ‘about trends on Covid19’, there were also “impacts of severe and regular restrictions in society on the public health, wellbeing, mental health and the economy.”

It’s worth looking at those trends and considering the three numbers that matter most – not the number of cases, since you’d expect that to rise when testing increases, but at the trend in deaths, ICU admissions and hospital admissions for Covid 19.

1. No Surge in Deaths

There has been no surge in deaths since the end of May, when the HSE confirmed that 1,652 people had sadly died with the virus. By the end of August – three  months later – that number had increased by an additional 125 deaths to a total of 1,777, and then, on October 3rd, a month later to a total of 1,810 or an additional 33 deaths. Every death from Covid is a tragedy, and many could have been prevented were it not for the State’s shameful neglect of older people in nursing homes, but the data is clear: there is no surge in deaths. As one observer noted  today, the current number of deaths is just 2.7% of the peak value. 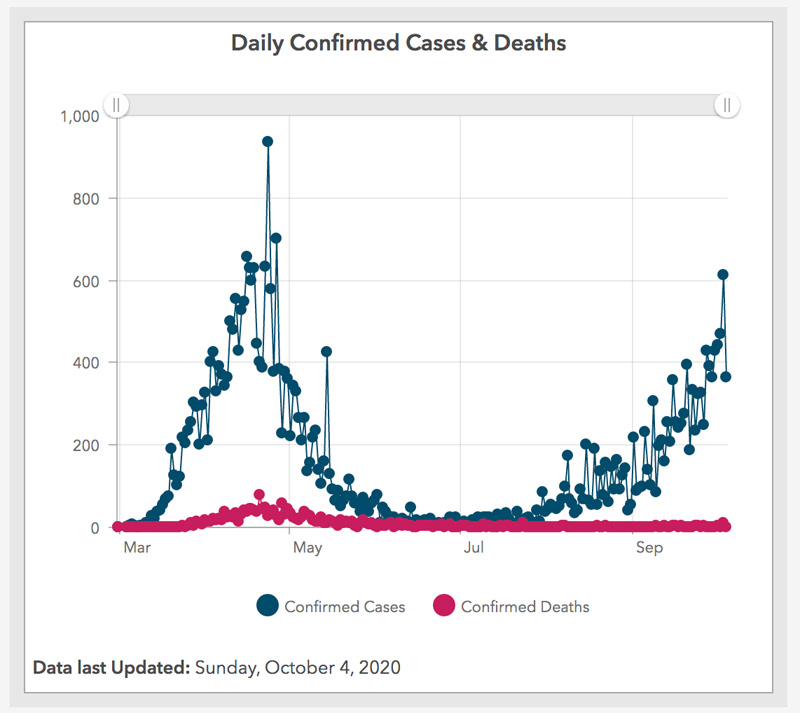 Some observers, including Leo Varadkar, have noted that when “someone dies while they have Covid-19 but not necessarily from Covid-19, they are recorded in the coronavirus death toll”, meaning that the total of 1,810 recorded at this point may be revised downwards.

Either way, the HSE’s own information hub suggests that the current situation is more of what Ivor Cummins has described as a case-demic than a surging epidemic.

Again, contrast the data for September and until last weekend with the actual spike last April and May. It’s also worth noting that, despite the appalling lack of investment in critical care by successive governments, the hospital’s ICUs were able to cope with the actual epidemic in April when up to 155 beds were occupied.

ICU capacity in Ireland is currently at 278 beds and occupancy is at 21 or less than 10%.

Again, the contrast between the actual surge in April and the number of admissions now is stark. The HSE has previously acknowledged that 94% of those who died had underlying conditions. Dr Martin Feeley has observed that this is not an indiscriminate disease like the Spanish Flu, and that Covid regulations should serve to protect those most susceptible rather than lockdown the entire country.

The three trends have been helpfully charted on one graph by economist David Higgins:

I've posted this chart before but I've never felt so strongly that the whole country needs to see it.

This wave is not the same as the first.

Hospital and ICU numbers are a fraction of where they were in April.

Level 5 would be excessive. pic.twitter.com/xYfP0VTHMy

NPHET’s recommendations do not seem rooted in reality. We need to dial down the hysteria and learn to live with this virus – because otherwise the second devastating surge won’t be coronavirus but a wave of cancer deaths and everything else that will come with the shutdown of our health service and our economy.

Free speech is a test of character – and RTE failed