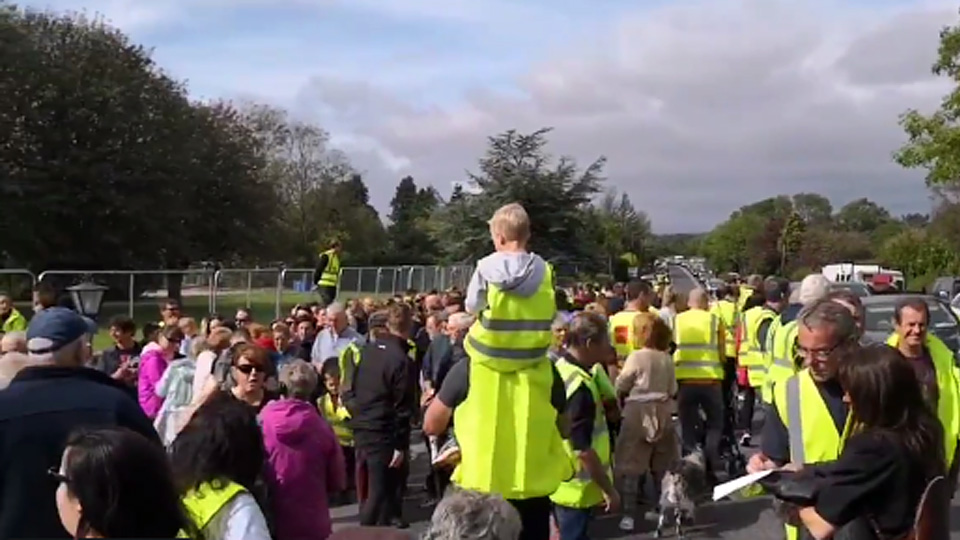 More than 1500 people joined a silent protest in Oughterard, Co Galway, today to protest against the imposition of a Direct Provision centre in town without consultation with local people.

The issue came to national prominence this week when some 800 people attended a meeting to discuss whether a closed hotel in the town would be turned into accommodation for asylum seekers.

Local TD Noel Grealish was applauded when he told the meeting that “a major city can absorb 300 refugees but not a small town like Oughterard.”  Although he was widely criticised by campaigners for his remarks, others, including this platform, defended his right  to represent his constituents.

Locals have said that the town does not have the facilities to support a significant number of asylum seekers, and said they were angry at the lack of consultation and what they saw as secrecy from the Department of Justice regarding the renovation of the hotel.

Many of those at the protest today carried signs saying ‘Say No to Inhumane Direct Provision Centres’ – a reference to the widely-criticised system of dealing with asylum seekers in Ireland, which often leaves families in limbo for years.

Biden’s pick for Chief of Staff in 2014: “American elections are rigged”

BLM: Black community being “terrorised” at a greater rate under Biden than under Trump