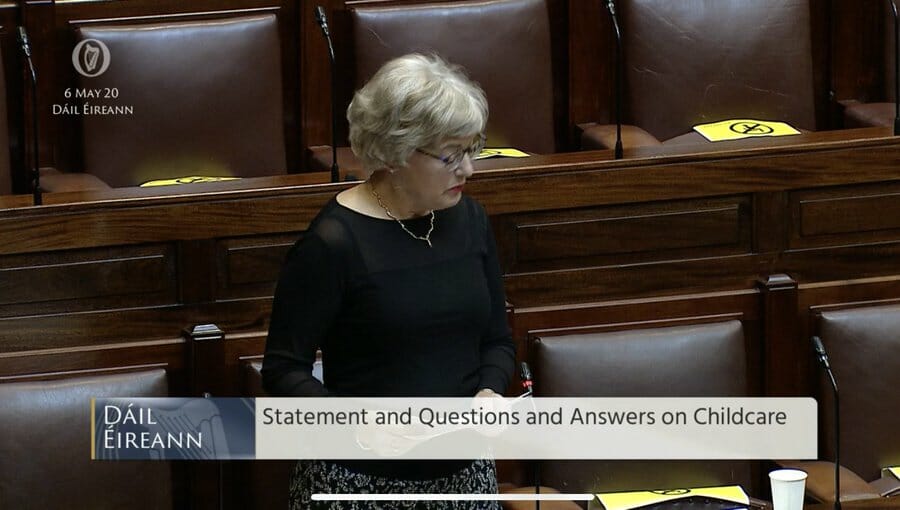 Something you don’t see every day: A politician who was explicitly defenestrated by the voters from her seat in the Dáil, back in the chamber just a few weeks later, taking questions like nothing had happened:

Here’s something you don’t see every day – a non-TD taking questions in the Dáil. Katherine Zappone presenting this evening pic.twitter.com/xAm6mApf8M

In her defence, she’s doing nothing that’s either wrong, or unconstitutional. As a Minister, she has to be accountable to the chamber. And the constitution does allow people who aren’t TDs to be ministers. So it was always possible that you could have, under the constitution, unelected ministers appearing in the elected chamber to take questions.

Indeed, to defend her a little bit more for a moment, it’s probably a good thing that she is there, taking questions, because the alternative would be a situation where you had a minister who couldn’t actually be questioned by our elected TDs. So: to be clear, she did nothing wrong.

The point of having a democracy, after all, is that the electorate are in charge of affairs of state. If we decide that people are not doing a good job, we can sack them. And in Zappone’s case, that’s precisely what we (or to be even more precise, the voters of Dublin South West) did. We took a democratic decision in February to remove Zappone from office, and yet, here she is in early May, sitting in the Dáil chamber, wielding the powers of a Minister.

It’s a useful reminder, if one were needed, that whether they like it or not, nothing the present Government does has a democratic mandate or any democratic legitimacy behind it. Every decision taken since February 9th has been taken by a Government that was explicitly rejected by the electorate, and filled with people who do not even hold seats in the parliament.

They remain in office only on the basis that the constitution basically requires that there should always be a Government, and that only the Dáil can replace one Government with another, which it has consistently failed to do since we elected it.

And there’s no sign that that’s going to change any time soon. Zappone, at least, is providing a little bit of accountability and democracy by respecting the people enough to subject herself to questioning by our elected representatives.

Those representatives, on the other hand, have made a collective choice to continue having the country governed by people with no mandate.

It probably doesn’t feel very important to most people, but when you think about it, it really is utterly shameful.