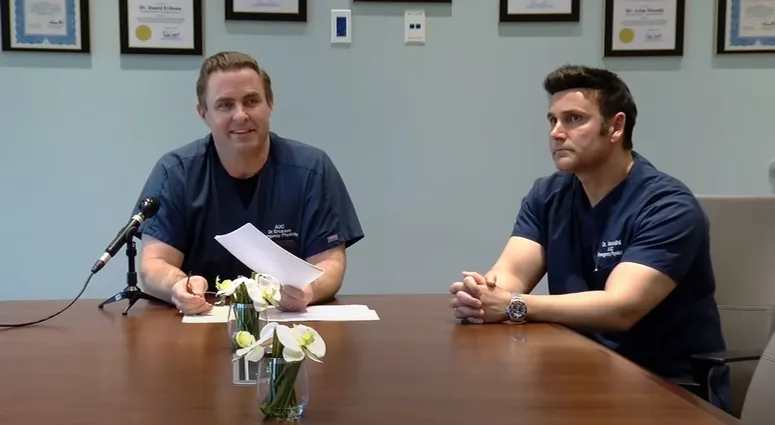 Last week, two Californian doctors, Dan Erickson and Artin Massihi, held a press conference in Bakerfield, California, to release data which, they claimed, shows that the present lockdown measures in the United States and most of the rest of the world, including Ireland, are an unnecessary over-reaction.

In their statement, which has been widely criticised and disputed by other doctors (more on that later) they claimed that having tested thousands of Californians, they were able to extrapolate from their data a general, population-wide infection rate of 12%, meaning that – they said – some five million Californians were infected, with the vast majority having no symptoms at all:

“During the conference Dr. Erickson said patients in need of other treatments are not coming into doctors offices because of fear.

“When I talk to E.R. physicians around the country, what’s happening? Well because COVID has become the focus, people with heart disease, people with cancer, hypertension and various things that are critical are choosing not to come in based on fear. So what that’s doing is forcing the healthcare system to focus on COVID and not focus on a myriad of other things that are critical, because we don’t have the staff there and the major complaint is fear,” said Erickson.

The doctors talked about the quarantine measures currently in place and stated that quarantining the healthy goes against what they studied.

During the conference, broadcast on YouTube, the doctors said that 12% of Californians tested so far have been infected. Extrapolating that to the general population, they estimated that as many as 5 million Californians have likely contracted the virus. They then used the total number of COVID-19 deaths statewide (roughly 1,200, as of last week) to calculate a death rate of just 0.03% — similar to the average death rate from seasonal flu.

“Millions of cases, small amount of death,” Erickson stressed repeatedly during the press conference, saying fears about the virus were overblown and questioning the need for widespread quarantine measures.”

Yesterday afternoon, the video featuring the two doctors making their case had 2 million views on Youtube. And then Youtube removed it for violating its terms of service.

“We quickly remove flagged content that violate our Community Guidelines, including content that explicitly disputes the efficacy of local healthy authority recommended guidance on social distancing that may lead others to act against that guidance,” said the statement. “However, content that provides sufficient educational, documentary, scientific or artistic (EDSA) context is allowed — for example, news coverage of this interview with additional context. From the very beginning of the pandemic, we’ve had clear policies against COVID-19 misinformation and are committed to continue providing timely and helpful information at this critical time.”

In some senses, at this point, it doesn’t actually matter whether Erickson and Mashii are right, or wrong. What’s much more important is the entirely Orwellian nature of that statement from Youtube.

In a democracy, which most of us still live in, “disputing the efficacy of local health authority guidance” is a fundamental freedom and liberty. You are allowed, whether Youtube likes it or not, to say that the Government is wrong. And if you are a doctor, and you believe that public health advice is incorrect, you don’t just have the right to say so, you probably have a duty to say so.

The line “may lead others to act against that guidance” is worse again, because it’s an overt admission from Youtube that the company sees its job, these days, as to do your thinking for you. Because you might agree with something that Youtube management does not agree with, you must not be allowed to see it in the first place.

This is exactly the kind of control and regulation of speech that is a feature of countries like China and Iran. It has no place in a western democracy.

But what about the big question: Are the two doctors right? The reason it’s so far down in the article here is that it doesn’t really matter whether they’re right or wrong – the question is more whether, as doctors, they have a right or a responsibility to raise a question if they think it is relevant, and they absolutely do.

But it seems to this layman that they’re probably wrong. They were extrapolating population-wide data based on those who had been tested. But the people being tested are those most likely to have Coronavirus. We’re not randomly testing the population – we’re testing the section of the population who we think have the virus. So you can’t say, if 12% of those tested have the virus, that 12% of the population automatically has it. That’s a fundamental error of statistics. But then, they’re doctors, not statisticians.

The worst thing about this, from Youtube’s point of view, is how pointless it all is. What actual benefit to they get from removing the video, when you can just read about what the doctors said on sites like this one anyway? Or watch this interview with them from Fox News the other night: (It’s a very bad interview, mind you, because Laura Ingraham never asks challenging questions of people she agrees with):

Still, it’s there, if you want to see it.

All that’s really accomplished by stuff like this is that Youtube undermines any trust a big chunk of its audience might have in it. It is a platform for speech; it is not the arbiter of what is right and wrong. And what’s most disturbing of all is that it now seems to have decided that since Youtube itself cannot be the arbiter of what’s right, and what’s wrong, it’s going to rely on Government advice.

But Government advice may be right, or wrong. It’s not holy writ.

If we’re no longer allowed to challenge it, in a free society, then we have a big problem.