WATCH: Police ARREST nurse as she tries to take her 97-year old mother from care home 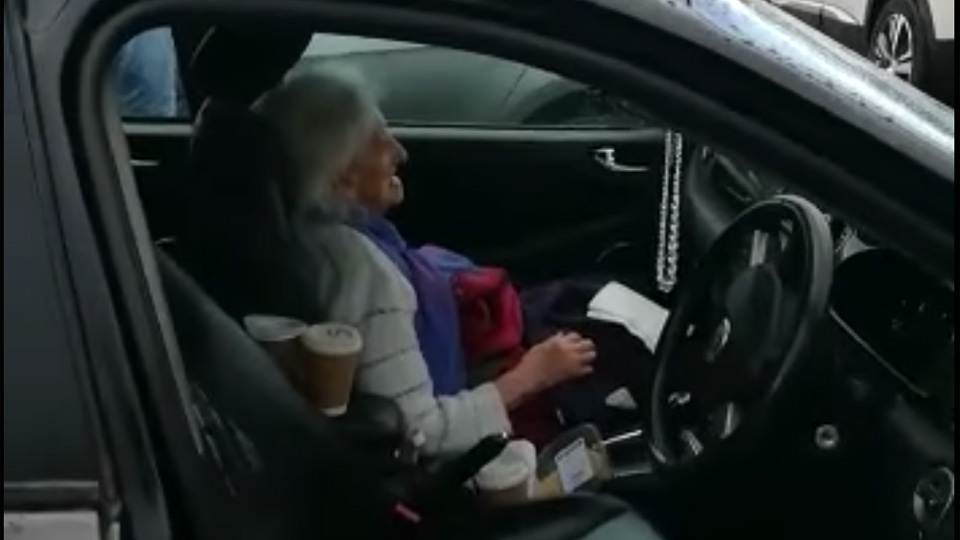 Distressing scenes have been shared of a retired nurse being arrested while handcuffed as she tried to remove her 97-year-old mother from a care home ahead of another tightening of Covid-19 regulations in Britain.

Ylenia Angeli, 73, who is a retired nurse, was handcuffed and detained after the nursing home called the police when she took her mother, 97-year-old Tina Thornborough, from the care home saying she wanted to care for her. She said had not hugged her mother in 9 months because of coronavirus and that the elderly lady needed one-to one-care at home which she could provide.

Ms Angeli was then placed in the back of a police car at the care home in Market Weighton, East Yorkshire, as her frail mother, who has dementia, looked on.

Leandra Ashton, Ms Angeli’s daughter, who has appeared in the long-running British soap Coronation Street, wept as she filmed the scene,  saying “everyone needs to see how ridiculous this situation is’.

Nine months of separation. Qualified nurse looking to take her mother home and care for her – ARRESTED – how can this be right, in the meantime her 97 year older mother’s health continues to decline #rightsforresidents #stilllockedaway pic.twitter.com/BkLGjYKMzE

Ms Ashton says in the video: “Let’s just make this very clear, my Nan, my 97-year-old Nan who we have taken from the care home because we haven’t seen her for nine months, is now being taken back by force to her care home.”

“My mother has been arrested, she is in the back of a car here. She is a nurse, a fully qualified nurse who is wishing to care for her own mother. We have an incredible use of police time to take my 97-year-old grandmother back into her care home where she is deteriorating, where we have not been able to see her for nine months,” she says.

She is in tears as she tells her frail grandmother: “Nan, I love you and we are going to fight for you.”

Ms Ashton told London Talk Radio that the family had “tried to go down every official channel” they could, and that a family member was needed to help feed their grandmother, something her mother had done every day.

She said the care home setting was just not adequate in  dealing with some of her grandmother’s needs.

She said the effect of the lockdown for her mother and her grandmother was “horrific to see”, and that Ms Angeli, as a retired nurse, was equipped to care, and in particular, to feed her 97-year-old mother. The family felt that the elderly lady might not be getting the care she required in that respect in the care home.

Leandra Ashton's mum Ylenia was arrested for taking her 97-year-old grandmother from a care home. The family had been unable to see her for nine months: "The fact there are rules in place that are separating families… I find disgusting."@JuliaHB1 pic.twitter.com/sZSXgljZ1Q

Humberside Police said they had been responding to reports of an assault from the care home and Mrs Angeli was subsequently ‘de-arrested’ and allowed home. Mrs Thornborough was not permitted to leave with her family.

Ms Angeli later said: “I was able to put my arms around my mother and tell her how much I loved her. ‘The home called the police!!! I was released eventually as the police said it was due to emotions running too high. What are we coming to?’We seriously need to fight this on all fronts! I’m 73 and was handcuffed and put into a police car and told I was to be taken to the police station.’This has definitely got to stop. The collateral damage to families is more than devastating. It’s totally destructive.”

“We will continue to fight with a fierce love for all our loved ones incarcerated in ‘care’ homes,” she said.

The new Covid-19 restrictions for care homes have been slammed by a coalition of over 60 organisations, brought together by the National Care Forum – the leading member association for not-for-profit social care providers.

They sent an open letter to Matt Hancock, Secretary of State for Health and Social Care, and Helen Whately, Minister for Care, calling on the government to ensure that care homes are supported to enable visits by families and loved ones, now and in the future.

The letter calls on the government to adopt this position in any new regulations it is drafting for the care sector to cover the national lockdown and the aftermath.

“National lockdown must not include locking out care home visitors,” they wrote.

“The isolation caused by blanket bans on visiting in care homes is intrinsically harmful and evidence of the extreme anguish caused is widely known. Locking down care homes in March was an emergency response to the global pandemic caused by a virus about which little was known. Eight months on, more is understood about the risks of transmission and measures are in place to keep people safe. People in care homes and their loved ones in the community have fundamental human rights, both as individuals and as a community, and a ban on visiting denies those rights. For older people in particular, who have on average a stay of 2 years in a care home, there simply isn’t enough time for many of those living in care homes today to watch and wait.”

There were almost 30,000 additional care home residents deaths in England and Wales during the coronavirus outbreak than during the same period in 2019, official figures show.