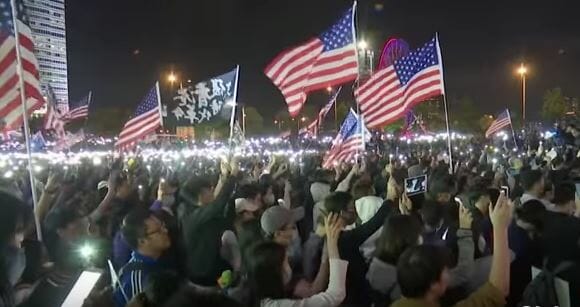 More than 100,000 people turned out to a Thanksgiving assembly in Hong Kong, waving US flags and singing the US national anthem after President Donald Trump signed two bills supporting human rights and democracy in the territory.

People are waving the national flag and singing the national anthem of the US at the #Thanksgiving assembly as part of #HongKongProtests. #POTUS signed the Hong Kong Human Rights & Democracy Act into law this morning HK time pic.twitter.com/zVnx1G5Ued

The new laws mandate sanctions against Chinese and Hong Kong authorities who carry out human rights abuses in the island, and will ensure that Hong Kong’s special trade status with the US is reviewed annually.

The sale of tear gas, rubber bullets and other equipment to Hong Kong security forces is banned as long as the suppression of peaceful protests continue. Demonstrations have rocked the region for six months, as police brutality against protesters continues to escalate.

At the Thanksgiving assembly demonstrators called on other democratic leaders to follow in Trump’s footsteps and support human rights and freedoms in Hong Kong.

Enraged Chinese officials hit back against Trump with Chinese Vice Foreign Minister Le Yucheng telling US Ambassador Terry Branstad that the move was a “serious interference in China’s internal affairs and a serious violation of international law.”

Earlier this month, proposing the Hong Kong Human Rights and Democracy Act, Republican Senator Marco Rubio said the bill “sent a clear message to Hong Kongers fighting for their long-cherished freedoms: We hear you, we continue to stand with you and we will not stand idly by as Beijing undermines your autonomy.”

Fortune reported that a loss of Hong Kong’s special status could prompt multinational firms to relocate to other nearby cities like Singapore or Tokyo:

The Hong Kong government is acutely aware of this too. It released a statement on Wednesday calling the U.S. acts ‘unnecessary and unwarranted’, but focused heavily on Hong Kong’s importance to U.S. and international economic interests.