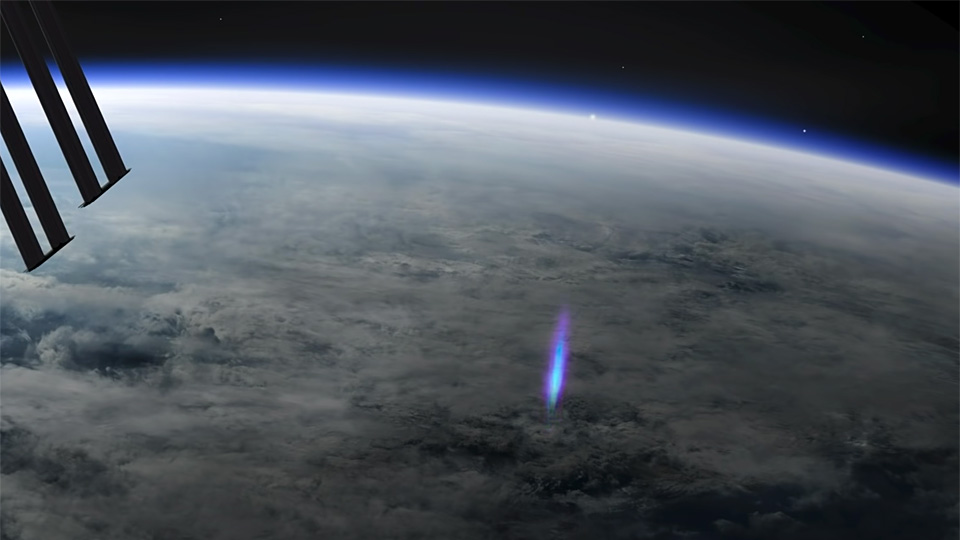 Artist impression of lightning in clouds seen from space followed by a blue flash that lasts 10 micro seconds, a blue jet lasting 400 milliseconds and an elve generated by the blue flash that lasts for 30 microseconds. The International Space Station solar panels are shown in the foreground.

A bolt of lightning that shoots upwards in space from thunderstorm clouds – named blue jet lightning by scientists –  has been spotted by astronomers working at the European Atmosphere-Space Interactions Monitor (ASIM) in the Pacific Ocean.

Publishing their observations in the science journal ‘Nature’, the astronomers describe reporting “spectral measurements from the International Space Station, which offers an unimpeded view of thunderclouds”. They said they saw “five intense, approximately 10-microsecond blue flashes from a thunderstorm cell” with one flash sending a “pulsating blue jet to the stratopause”.

A blue jet is a form of lightning that shoots upwards from thunderstorm clouds. They can reach as far 50 km into the stratosphere and last less than a second. The space storm-hunter measured a blue jet that was kicked off with an intense five 10-microsecond flash in a cloud near the island of Naru in the Pacific Ocean.

The flash also generated equally fantastic-sounding ‘elves’. Elves are rapidly expanding rings of optical and UV emissions at the bottom of the ionosphere. Here, electrons, radio waves and the atmosphere interact to form these emissions

“As it turns out, there are a lot of things left to discover. Things like blue jets, elves and red sprites. Bizarre-sounding things. Things that are very difficult to observe from the surface of the Earth. As a Nature paper reports, however, the European Atmosphere-Space Interactions Monitor (ASIM) observatory on the International Space Station is helping scientists find answers,” the ESA said.

“Looking down on Earth’s weather from the International Space Station 400 km above …the collection of optical cameras, photometers and an X- and gamma-ray detector was installed on the Space Station in 2018. It is designed to look for electrical discharges originating in stormy weather conditions that extend above thunderstorms into the upper atmosphere,” they said.

Capturing these phenomena using the highly sensitive ASIM tools is vital for scientists researching weather systems on Earth. The observations hold clues to how lightning is initiated in clouds and investigators think these phenomena could even influence the concentration of greenhouse gasses in Earth’s atmosphere, underscoring once more how important it is to find out exactly what’s going on above our heads, the ESA said.