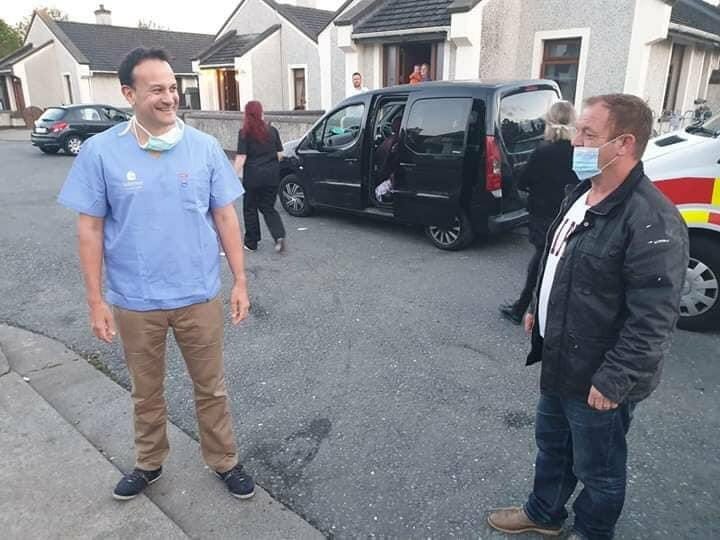 Cards on the table: I think criticising him for this is nuts:

On the front line – Taoiseach @LeoVaradkar at Morgans Place site in Blachardstown where he he help with #Covid19 testing of residents. This sends out a really positive message 👏🏻👏🏻👏🏻 pic.twitter.com/neqoZ817dZ

Yes, the photos were posted by a Fine Gael councillor, but they clearly were not a “photo op” if the term has any meaning. A photo opportunity is when you tell the press that you’ll be doing something at a certain time and that they’re invited to come and take photographs of you doing it.

Those photos, as is immediately obvious by their quality, were not taken by a press photographer. The one with the little girl appears to be a photo taken by a family member, presumably as a memento of the day the Taoiseach came to test them for Covid 19.

This hasn’t stopped the criticism, though:

But…. why?
Is he not busy enough being Taoiseach?
I personally would prefer to see him putting all his focus into that
These photos make me feel really uneasy…
This is not a Taoiseach's role

The Taoiseach is campaigning in his own constituency after FGs worst showing in nearly 20 years at the General Election, and a personal result which was embarrassing to him. Please let's not pretend he's doing anything else. https://t.co/EUsFviXJrb

“Nobody expects any Government to be perfect, but the utterly unquestioning attitude of our media to Varadkar and company is beyond credulity. If you don’t remember, let’s recall some of the mistakes: The Irish Government sent a memo to nursing homes telling them that bans on visitors were, well, banned. Then it sent a memo to nursing home staff telling them that they had no need to wear personal protective equipment. Then, if those weren’t enough, it told nursing homes that patients who were sick were not to be sent to hospitals.”

There are two things in that that are worth expanding on, a little. The first is this: expecting perfection from any Government during a crisis like this is a fool’s game. Paddy Cosgrave, for example, has been going mad about the contract offered to private hospitals, and the cost of it:

Cancel the contract is an interesting demand for someone like Paddy, who runs a multi-million euro business with contracts coming out its ears, to make. Presumably he knows that contracts can’t just be cancelled at the drop of a hat, and that there are financial obligations in contracts that are fixed. There’s every likelihood that cancelling those contracts now wouldn’t actually save the state much money, but would simply reduce bed capacity. And was it a bad idea to sign them in the first place? Possibly. But if Paddy – or anyone else – is going to pretend that if they’d been in power, and their response to the crisis would have been to spend weeks haggling down the cost of a contract for more beds, well, I’ll take Varadkar, thanks. Is it perfect? No. But it’s the kind of mistake you should be willing to accept. We needed something, and we may have paid a little too much for it. You’d still rather have the beds than not have them, if they were needed.

On the other hand, we have the nursing home situation, which has, objectively, been mismanaged from the beginning, sometimes to an incomprehensible degree. And the media, frankly, has to take a decent share of the blame for being far too deferent, and far too unwilling to ask awkward questions, at the beginning of the crisis. When something seems like a terrible decision to a layman, a good rule of thumb is that it probably is a terrible decision. It may not be, of course, but the media’s job is not to explain Government policy for the Government, but to force the Government to explain and justify its own policy, sometimes to itself, if needed.

This is an example, and we cite it here repeatedly, of that phenomenon:

Department of Health has said that general visiting restrictions that some hospitals & nursing homes have introduced, should be lifted. The National Public Health Emergency Team has not recommended these.

The orders to medical staff in hospitals not to wear facemasks was another.

But Varadkar going out to help on the frontlines? It’s important sometimes to recognise that people you oppose, and people who make decisions you fundamentally disagree with, are human beings as well. Being Taoiseach in a time like this can’t be an enjoyable time for anybody, and if it were me, I’d be lying awake at night wondering was there something more I could be doing. Most of you, I suspect, would be the same. Going out to actually help people and help the people doing the helping is a great move, for a couple of reasons. As those photos testify, most people’s reaction to having the Taoiseach come to their street to help out is very positive – the photo is something that little girl will remember for ever. And the health care staff, on the front line, at least know that the Taoiseach is taking the same risks that they are.

There’s an awful lot to criticise Varadkar for. This, to me, at least, ain’t one of those things.