When this emerged last night, there was at least the possibility that the public was being tricked by old footage from a pre-Covid summer, and that the Taoiseach was not, in fact, out yucking it up in the Phoenix Park yesterday while thousands have died in nursing homes and their families banned from attending the funerals. But no, he’s admitted it. 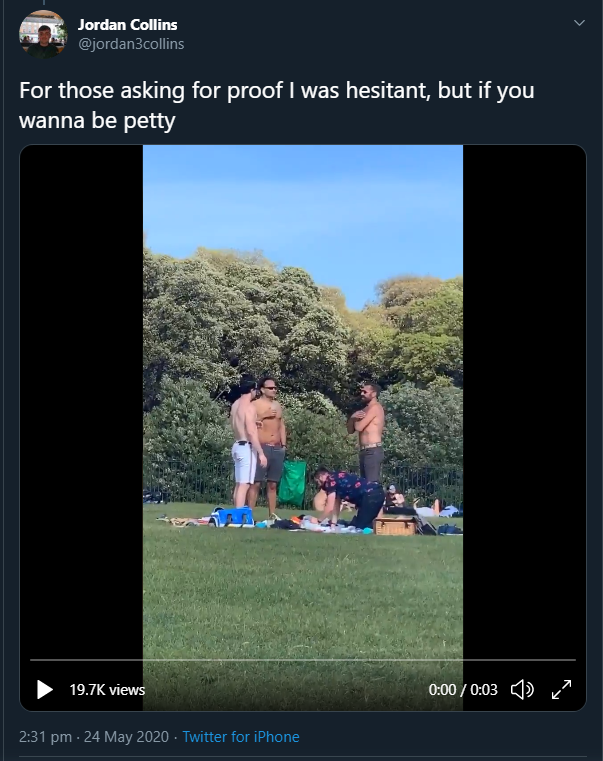 The official explanation, by the way, is faithfully carried by the Independent, which, very helpfully, doesn’t include the photos, or mention the incident in the headline, preferring to lead with the (apparently much more important) news that the Taoiseach is living in the semi-official residence that comes with his office:

“Mr Varadkar’s spokesperson revealed he was staying in the residency, which is available to Taoisigh, after photographs emerged of the Taoiseach meeting friends in the Phoenix Park.

The Taoiseach and his partner Matthew Barrett met friends at the Wellington Monument on the Parkgate Street side of the park on Sunday afternoon.

The area of the park is almost 8km from his apartment on Carpenterstown Road in the Dublin West constituency.

Under the Government’s Covid-19 restrictions, people are prohibited from any non-essential travel more than 5km from their homes.

However, following queries from the Irish Independent, the Taoiseach’s spokesperson said: “The Taoiseach was in the Phoenix Park with his partner Matt and two friends on Sunday Afternoon, in line with public health guidance.”

“He was within 5km of the Stewards Lodge, where he is staying during the Covid Emergency,” he added.

Sources said the Taoiseach choose to stay in the residence because it has an office with “secure connections” for video conferencing which allows him work from home.

The source the Taoiseach’s friends could not come to Stewards Lodge because it was further than 5k from their home.”

The independent seems to have asked about the 5km restriction, which always had an obvious explanation, but seems to have forgotten entirely to ask about that other restriction – the one that says that we must keep a physical distance of 2 metres from other people at all times, excluding those who live in our household. The gentleman on Varadkar’s right (our left) who touches his belly is his partner, so that’s fine. But the man on the right (Varadkar’s left) is not a family or household member, and the Taoiseach appears to be substantially less than 2 metres away from him. The Taoiseach is very lucky to have encountered the Independent on a day when they didn’t feel like asking that question, isn’t he?

There are two questions here: First, did Varadkar break the rules? And second, does it matter?

Truth to be told, you’d find it hard to make a case against him on the first point stick. He’ll say that he was 2 metres away and that our eyes are being tricked by perspective. Critics will say come off it, and that’ll be that. Nobody could reasonably convict.

On the second point though, it’s more clear cut. This man is the leader of our country and the architect of the social distancing regulations that have separated families (some of us haven’t seen our mothers since Christmas) and caused the public to endure immense personal and economic hardship. And yet there he is, out in the park, without a care in the world and being cavalier at best about the regulations he expects the rest of us to follow.

Further, there’s the question of example. How can the Gardai, with any authority whatever, patrol parks and beaches and break up social gatherings after this? The question of “what did yis say to Leo Varadkar, eh?” will be a very fair one. How many people will look at these pictures and say “well, it it’s good enough for him, I’m not staying cooped up any more”? Again, could you blame them?

Finally, there’s the infuriating question of media bias: The front page of this morning’s Irish Times features yet another story about the present outrage in the UK about an advisor to Boris Johnson breaching apparent lockdown rules. In that case, the man in question is the parent of a four year old with autism, and needed to place the child with people who understood the child and the child’s condition. He drove 260 miles to leave the child with his parents. Now, that might seem reasonable, or it might not carry any water, depending on your perspective, but it is at least a reason.

Varadkar, though? He just wanted to have a party. And which story is our media leading with? The UK guy, of course. And the Independent chooses to bury the story about Varadkar in the middle of the paper, under a headline that notes he’s now living in Farmleigh, as if that’s the most important part of the story. What a bunch of crooks.

Update: The question as to whether Varadkar broke his own Government’s regulations was open, until a few minutes ago. Now, it’s fairly clear that he did, unless someone’s going to argue that he wasn’t having a picnic?