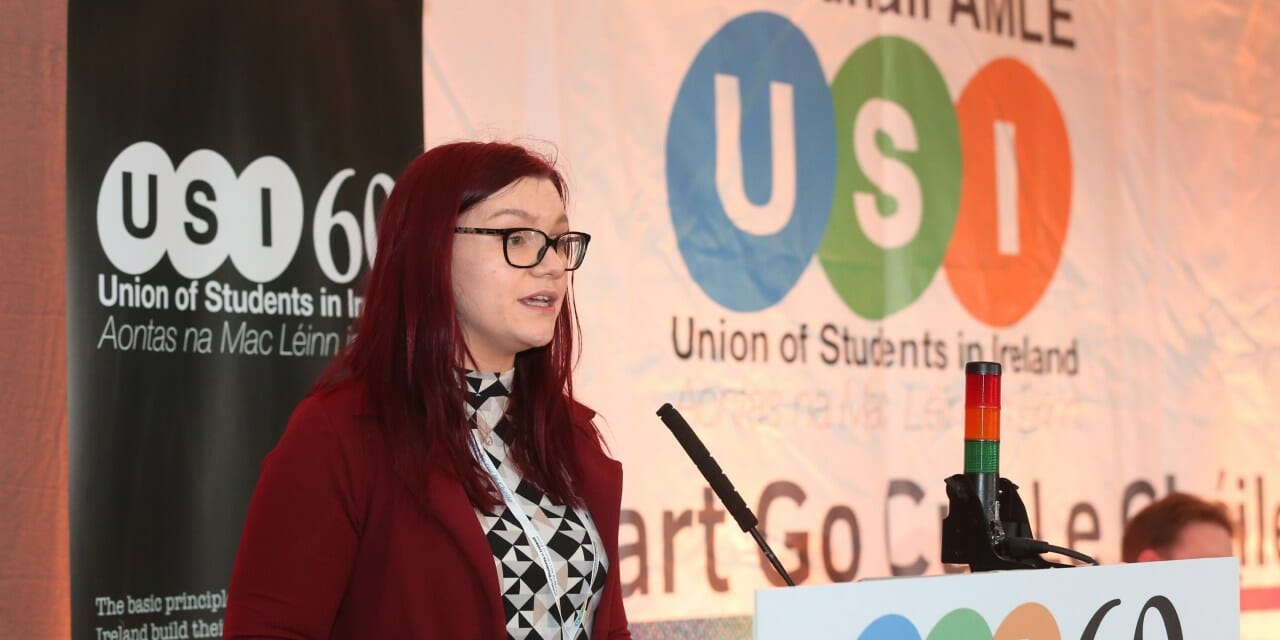 Michelle Byrne, Deputy President / Vice President of Campaigns for the Union of Students in Ireland, has resigned following the release of recordings which show she had agreed to pass the names of students on to a group claiming to be a part of the extremist, far-left Antifa movement.

Initially the USI had said it would hold an investigation into the claims made about Ms Byrne but recordings were later released which showed that multiple members of the executive of the USI had been in contact with, and in many cases offered to help, the group.

Ms Byrne’s resignation was announced on Facebook and Twitter on the USI accounts. The statement, which did not mention Ms Byrne by name and which was uploaded as an image, which limits its visibility in search and archival engines, says that the USI had accepted her resignation as she “showed a willingness to engage in activities which fall far short of the standards of probity and transparency members expect from USI officers”. The USI says it will not be making any further comment on the matter at this time.

The problem for Lorna Fitzpatrick, the current President of the USI, is that there is now a recording of her saying that was aware that Ms Byrne was talking to the group. Ms Fitzpatrick was also recorded saying that she would be herself willing to pass on the names and other information to the group. On one of the recordings which have been released the group says “Obviously the intent is to get people fired or get people known professionally to their employers” to which Ms Fitzpatrick responds “In a personal capacity I would have no issue with that”.

Given that the USI has now accepted the resignation of Ms Byrne, for activities which Ms Fitzpatrick was at least partially aware of, it remains to be seen if her position is tenable. Particularly as the statement released says that the “USI is proud to have a diverse membership with political opinions of all types represented and included”, which would seem to be odds with Ms Fitzpatrick’s agreement to pass on student details to an organisation which was openly speaking of harming those students.

The revelations came following an investigation by the Burkean, a campus based news and cultural commentary website, which saw reporters from the Burkean set up a honeypot Twitter account which claimed to represent an organisation called ‘Irish Students Against Fascism”.

That account reached out to numerous individuals, over several months, seeking their help to set up an online database of right-wing students. Irish Students Against Fascism told those it contacted that it wanted to ‘ruin the lives, careers, and reputations’ of those students, through harassment, doxing, and violence.

On Friday the Burkean revealed that the account had been a honeypot since it was created and since then they have been releasing a stream of screenshots and recorded conversations between themselves and multiple other people, ranging from general election candidates to members of the executive of the USI.

We have reached out to Lorna Fitzpatrick for clarification on the extent to which she was aware of Michelle Byrne’s contact with Irish Students Against Fascism, and if she feels she can represent the full student body given her actions, but she has so far refused to comment on the matter.

Gary Kavanagh is a reporter and commentator. He handles some of Gript's more investigative pieces. Legal threats can be directed to g[email protected] He's on Twitter at @G_L_Kavanagh.

Túsla: RTE didn’t tell us about issues at Hyde and Seek for two months