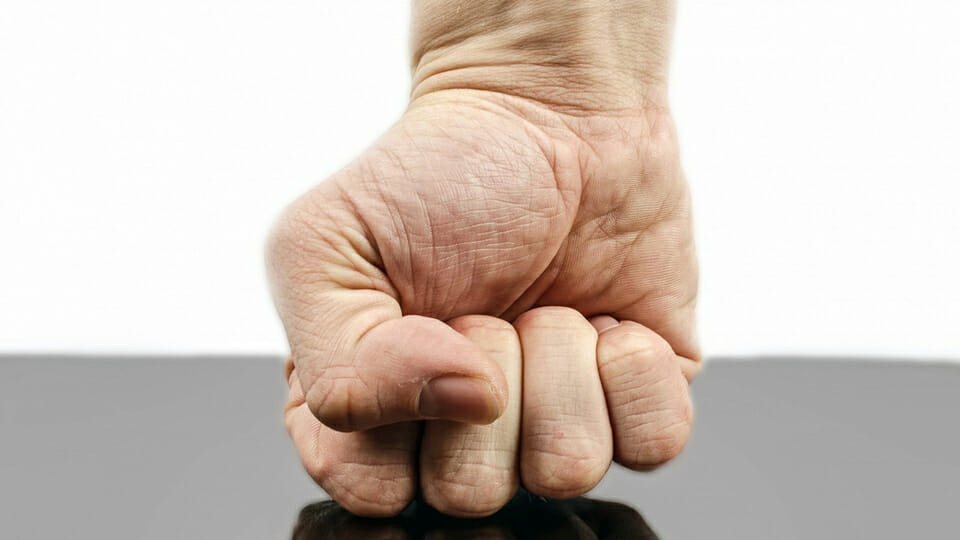 This article was re-published with the kind permission of First Things and the author.

The most debilitating aspects of my current illness (Ramsay Hunt Syndrome) have been those associated with my left ear. Two audiology tests have confirmed that, due to damage inflicted by a herpes zoster virus, this ear has become profoundly deaf. Surprisingly, this does not mean I cannot “hear” anything in this ear. It exhibits some minor signs of life at certain frequencies, and this provides scope for two deeply unpleasant co-existing disorders—hyperacusis and tinnitus—which fill my “deaf” ear with noise.

Not that I can be certain where hyperacusis ends and tinnitus begins. Hyperacusis is over-sensitivity to sound; tinnitus is the experiencing of phantom sounds—oceanic whoosh, industrial clamor, metallic figures copied from the world of day that replay themselves in the night. Both disorders are apparently incurable, though tinnitus, being a trick of the brain, can be controlled by cognitive methods. I am learning to determine how much of it I wish to hear. Hyperacusis, the more unsettling of the two disorders, results—as I understand it—from the ear’s over-adaption to hearing loss due (in my case) to impairment of the auditory nerve. “Hyper” suggests excessive; “acusis” relates to noise. The NHS, Britain’s health service, describes hyperacusis as “intolerance to everyday sounds that causes significant distress and affects a person’s day-to-day activities.”

The ear contains the body’s three tiniest bones, which carry sound as vibration from the eardrum to the cochlea (the inner ear), which receives the sound via thousands of tiny hairs (known as stereocilia), which transmit the sounds via the auditory nerve to the brain. In my case, the paralysis of this nerve has unleashed a rare form of hyperacusis. I’m not even sure that the “sounds” assailing my deaf ear qualify as hearing. It seems that the ear’s remaining auditory capacity enables it to pick up, amplify, and distort the most irritating noises on the spectrum, while muting everything else.

Children’s cries, venerable motorcycles, clattery crockery, boiling kettles, vacuum cleaners, water fountains, whistles, air brakes, espresso machines, sirens, electric hand-dryers, barking dogs, pneumatic drills, concrete saws—these are some of the worst offenders. These I “hear” with both ears, but the effect of “hearing” them in my left ear is to drown out everything else and send my head reeling. If I sit at a café along a busy street, a passing motorcycle could leave me clutching my head in something like pain. It goes without saying that all this radically compromises my ability to hear what people are saying to or around me.

Some sounds appear to have no audible manifestation in my deaf ear other than in the form of vibration—sound pressure without sound. For example, if someone drops a set of keys on a glass table, I can hear the sound more or less normally with my good ear. But in the deaf ear, corresponding to this, I can feel a kind of disconcerting exhalation—as though, deep in the labyrinth of my head, a door has banged shut and created a disruptive draft, which, by the time it reaches the exit, becomes nothing but a strange tickle or tremor. The damage to my ear has also affected my balance, requiring me, in effect, to relearn how to walk.

Hyperacusis brings annoyance, fear, and pain, often resulting in irritability, anxiety, and phonophobia—a fear of even everyday sounds. In extreme cases, people have been driven to kill themselves. It struck me rather early on that hyperacusis, for all its discomforts, provides an apposite metaphor for our democracies’ increasingly dysfunctional conversation.

Collective discourse, like any conversation, depends on the ability of participants to articulate their perspectives freely and respond to what others have to say. We were assured in the beginning that social media would increase free speech and thereby enhance democracy. But under the attrition of decivilizing platforms like Twitter, our collective conversations have been hijacked by the idle, the empty-headed, and full-time activists (professional and otherwise), which means that regular citizens have been immobilized and silenced by their own inability to engage with the venom, rage, and vacuity of the Twittersphere.

A combination of anonymity, invulnerability, and defensiveness causes Twitter users to revert to a form of pre-civilization, in which kill-or-be-killed defines the conditions of exchange. The medium therefore allows the loudest, angriest, rudest, most ignorant, and most accusatory voices not merely to rise above others, but to eliminate anything not delivered in the same fashion. To enter the discussion on the prevailing terms would involve having to ratchet down to the same level of vitriol and condemnation. Those for whom this is anathema are therefore rendered silent—if not by fear, by discretion.

Twitter has come to function as the chief policing weapon of public conversation—being the unofficial instrument of editing, censoring, bullying, silencing, demonizing, and cancelling. It is true that only a minority of the populations of most Western societies—22 percent in America, for example—is on Twitter, and that an even smaller proportion actually tweets, but this is misleading as to the actual impact of the platform.

Most journalists are on Twitter, ensuring that its anti-ethos has been mainstreaming in Western media for more than a decade now. Indeed, journalists—the supposed high priests of public conversation—are not merely “on” Twitter but thoroughly fixated by it. Hence, much of what is deemed to be news either originates in or is mediated by the Twittersphere. That means that about 5 percent of the population essentially decides what an entire society gets to talk about, and how its citizens are permitted to speak and even think about things.

The incivility that has become synonymous with Twitter is highly contagious, so the resulting anti-culture has leached into the mainstream also, imposing a further chill on thoughtful discussion. Even from our oldest newspapers and broadcasters we are nowadays hearing mostly the crudest, ugliest, and most strident voices, and becoming accordingly deaf to subtlety, nuance, and reason.

But the effect of the leaching of web discourse into the mainstream is more serious than a mere coarsening of public discussion. Twitter creates a phantom but audible swarm of locusts, just within hearing distance, which deters dissent—the precise opposite of what we were led to believe social media would do. Accordingly, our societies have been rendered deaf, dumb, and devoid of balance. This form of hyperacusis is not accidental or collateral, but part of the core functioning of the web technocracy. By “coincidence,” these media came along at a time when they were to prove maximally useful to leftist ideologues seeking to turn reality inside out.

More and more, I notice, regular citizens fear joining in with public conversations of any kind, even a quiet chat over the dinner table. Raise a topic regarded as “controversial” (one of the topics gatekeepered by the online goon squads) and people clam up, muttering received catch lines and cop-outs. The result, inevitably, is a reduction of the variety and vibrancy of public discussion.

Of course, this is fatal for democratic societies because the balance of public discourse depends on the ability of all concerned to hear what others are saying as well as have the right to speak themselves. A society in the grip of Twitteracusis loses its connection to all that is moderate, reasonable, fair, and thoughtful, and so loses its equilibrium. In the era of Twitteracusis, the voice of reason is reduced to a muddle of indecipherable sounds, incapable of interpretation by whatever is left of the society’s brain. And, to put the tin ear on things, anyone who attempts to focus on these questions is himself subject to the action of the problematic phenomenon, being instantly drowned in waves of abuse and derision.

Twitter tends to attract people who agree about things. Some implications of this trend were noted by Eli Pariser in The Filter Bubble: What the Internet is Hiding from You. This book described the future “algorithm society” in which everyone will only hear about things they are already likely to agree with. “Democracy,” Pariser writes, “requires citizens to see things from one another’s point of view, but instead we’re more and more enclosed in our own bubbles. Democracy requires a reliance on shared facts; instead we’re being offered parallel but separate universes.”

Pariser feared a drying up of democratic exchange, which is obviously already happening. But nowadays we tend to forget that freedom of speech is less an opportunity for venting than a court intended to try the viability of ideas and so ensure they are roadworthy. It is bad enough that social media users are increasingly isolated in their own informational bubbles, convinced that the opinions they have received are all that exists. It is worse that, since these are increasingly the only options being discussed, society risks adopting untested ideas with likely disastrous consequences in the future.

Twitter users tend to be “progressives.” Ironically, the nature of the medium is the antithesis of progressive, since the Twitter bubble closes users off to discussions about alternative viewpoints and information, and thereby decelerates a society’s momentum in truly positive directions—something that depends on a process in which discussion occurs between opposing views, moving dialectically toward consensus and/or democratic resolution. In a society plagued by Twitteracusis, this process stops working. Closing down the possibilities offered by wide-ranging discussion not only retards progress, but also causes people to forget how to defend their own points of view. This results in people, under the attrition of propaganda, subconsciously changing their beliefs and behaviors to avoid uncomfortable situations. This is precisely how Twitter achieves the purposes of those who have learned to manipulate it.

If you measure things from, say, the 1980s to the present, you see clearly that in many ways we have gone backward. As pseudo-progressive issues like gay marriage and transgenderism were pulled to the front of the wagon, different hard-won quantities were tumbling off the back: free speech, freedom of conscience, fairness, equality of opportunity, common sense, basic civility. The most remarkable thing about “progressiveness,” then, is that its attack serves to drive us off the path of naturalistic human progress, onto roads uncharted. And our societies have been deafened to every voice that might warn them about why this is happening.

This article was re-published with the kind permission of First Things and the author.

Simon Harris was warned babies would be born alive after abortion in Ireland. He refused an amendment to help them.