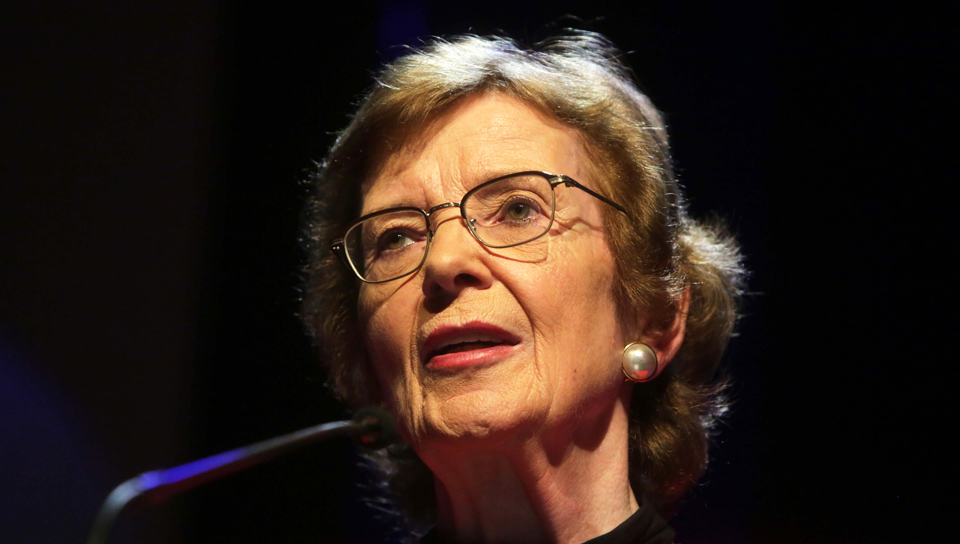 If Mary Robinson was, let us say, Amy Coney Barett, or any other prominent conservative lawyer or human rights activist, and had no defence other than gullibility for being used by a multi-billionaire, patriarchal potentate to help him cover up the abduction and imprisonment of his adult daughters how would the media react?

How would Ryan Tubridy conduct an interview with her should she appear as a guest on the Late Late Show? Would he allow her a free run through her implausible and contradictory apologia and nod along in sympathy for the embarrassment at falling into a friend’s trap ? Would he buy in so eagerly to her very belated and self-serving commitment to do ‘everything possible’ to secure the princess’s freedom?

The questions are of course rhetorical. If last night’s platform is what RTE is prepared to stand over as public service broadcasting, it has reached a new low. The only thing more deflating is seeing a life long advocate of human rights, a leading feminist and distinguished lawyer duped – according to her own account – like a simple rookie.

Mary Robinson was asked by her good friend, Princess Haya, the sixth wife of Mohammad bin Rashid al Maktoum  to help convince the UN that Princes Latifa was alive and being cared for by her family contrary to the assertions the princess had herself made in a lengthy video which was smuggled abroad ahead of a daring escape bid as a kind of insurance plan should the attempt fail, which it did.

"I made a mistake. I let my heart lead my head. I went to help a friend. I was naive. I should have been more alert"

Mary Robinson speaks about her regret over Princess Latifa.#LateLate pic.twitter.com/Ax6lER2Fu9

Robinson told Tubridy that she had heard a clip from the end of this video. Just a clip. It did not occur to her to listen to the entire forty minute or so testimony before making her assessment. It is also amazing that she did not make herself familiar with the several interviews given by Latifa’s friend Tina Jauhianen, who assisted in her bid for freedom.

Tina was at that point – before Robinson’s widely publicized intervention – actively campaigning for international support for Latifa’s release. It is baffling that the former President made made no contact with the group advocating for the Princess’ freedom. Baffling too that she did not look into the story, published by The Guardian in 2000, of the abduction of Latifa’s sister Shamsa on the streets of Cambridge after she broke free from the family’s English mansion. Another bizarre story that was aired again in the Sunday Times and elsewhere when the Latifa story broke in 2018.

Even more disturbing is the fact that Mary Robinson appeared to accept that being bi-polar is somehow a condition that justifies a woman’s incarceration. It used to back in the day when Ireland like other countries hid their mentally ill behind the walls of terrible institutions. Most of us today know someone or of someone with the condition. Their treatment does not usually involve the deprivation of their freedom and agency. It certainly does not deprive them of their mobile phones and contact with friends.

Mary Robinson, by her own admission, knew nothing about bi-polar. How strange she was not curious to find out from an independent medical authority and instead relied on the Dubai house ‘psychiatrist’ who was ‘very convincing’ she told Tubridy. She also accepted his glib assurances that Latifa’s sister Shamsa, whom she did not meet, suffered from the same bi-polar disorder.

One has to ask at this point if that is the standard level of due diligence and inquiry in the investigation of alleged human rights abuses? If someone like Mary Robinson, a former UN Human Rights Commissioner, has an opinion bias in favour of the powerful alleged abuser and his pampered Queen rather than the victim, our understanding of rights and equality has scarcely advanced at all.

What is more shocking in this instance are the unchallenged contradictions in Robinson’s narrative. She told the BBC a week or so ago that she was ‘misled by Haya because she (Haya) was misled’, something that didn’t sound very credible to be sure. Last night, she told Ryan Tubridy unequivocally that Haya herself was in fact party to the deception.

Robinson told both the BBC and Ryan Tubridy that she knew she was ‘particularly tricked’, ‘horribly tricked’, absolutely stunned’ when photos of her meeting Latifa were made public by the UAE shortly after her visit. So why didn’t Tubridy ask the obvious question about her continued silence until the recent BBC Panorama programme? Why did it take two years, until the release of further smuggled video where Latifa lucidly described how she was set up by Haya at the Robinson meeting. Why did Mary Robinson wait for the reputation-shredding BBC programme to declare she was duped and deeply concerned for Latifa?

Mary Robinson’s narrative is full of jarring chords. It is hard to believe she could be so naive without other factors at play.  So what else is there to explain her extraordinary behaviour? Surely she should be asked about her previous dealings with Dubai and whether and to what extent the country supported her eponymous Foundation for Climate Justice.  She was set to launch her book on climate there in March 2019, though that event didn’t go ahead. These are questions that would be raised if was, let us say, Amy Coney Barrett in the hot seat.

The most chilling and terrible thing about Robinson’s great mis-step is that it is almost certainly too late now to save Latifa and her sister. That is something Tubridy and RTE would be too polite to point out to someone like Mary Robinson. Public service broadcasting ends long before we get to telling a former president, onside with all the right causes, that we have lost faith in her.