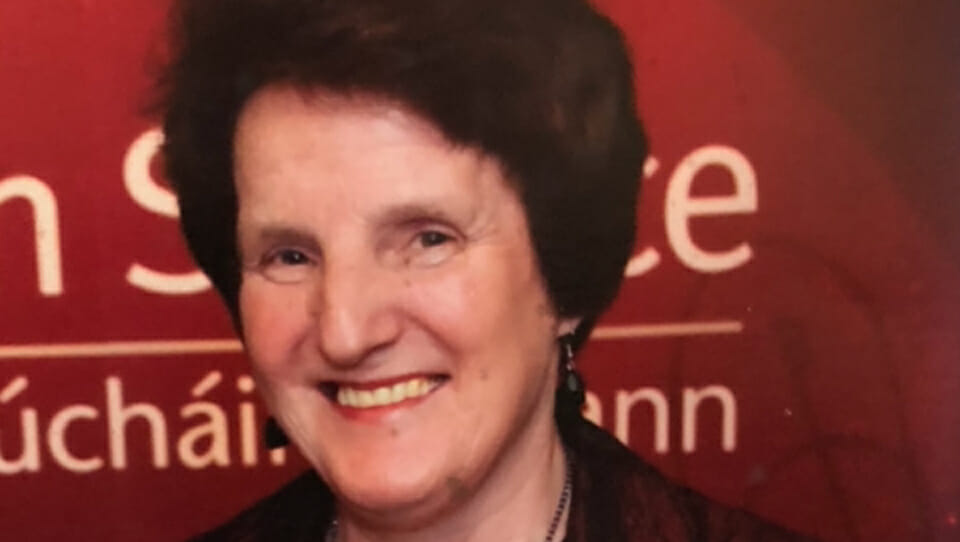 Traditional singers and musicians have being paying their respects online and by lining the streets of her native town as much-loved singer Nora Butler Swan was laid to rest in Nenagh today.

Because of covid-19 restrictions,  the renowned traditional singer was laid to rest after a private mass, but her many friends said that “thousands were there in spirit”.

The Toomevara native was a five times All-Ireland champion singer and one of the most-respected champions of traditional Irish music in the country.

She toured extensively with Comhaltas Ceoltoiri Eireann bringing her command of the traditional arts to Asia, Australia, Canada, Tripoli, New Zealand and Libya, and also made many radio and TV appearances.

The Brú Ború Cultural Centre in Cashel, where Nora regularly performed, said that words could not describe “the sadness and immense loss that Nora’s passing will have on so many”.

She released an acclaimed album in in 2001, The Dawning of the Day, featuring of top musicians Billy Greenall, Deirdre McSherry and Eileen O’Brien.

Nora had an incredible wealth of songs, including many rare and beautiful pieces and important historical songs.

She is predeceased by her beloved husband Pat Swan, who died two years ago. Until his passing, they were inseparable and familiar faces at fleadhs and cultural events the length and breadth of the country.

A warm, engaging and elegant woman, Nora Butler’s lifelong passion for singing won her great admiration and friendship everywhere. She was also a marvelous teacher and an organiser of traditional music celebrations.

Nora was buried after a private family funeral mass in St. Mary’s of the Rosary Church Nenagh, where music, including one of her favourite songs Slievenamon, was beautifully performed by Eileen O’Brien and Tadhg Maher. She will be fondly remembered by her many friends and family, and especially by her beloved sister Mary Hartnett.

“It is only two years since I stood on the altar of this beautiful church in Nenagh and bade farewell to our colleague and friend Pat Swan, loving husband of Nora Butler.

It is heartbreaking that to-day we mourn the passing of Nora but in a very changed world. The thousands of people who would have wished to be with you for the celebration of Nora’s life cannot do so in this time of crisis. We will be there in prayer and spirit.

To us in Brú Ború and Comhaltas, Nora was family and her passing has touched us deeply. The messages from all over the world are testimony to the affection and admiration in which she was held. There is an unfillable void in the lives of all who had the privilege to know her and call her friend. Many a tear has been shed by young and old. Úna and I will miss her so much.

Nora’s sincerity, generosity of spirit and gentle but firm faith have inspired us all. Her sense of fun and humour melted many a cold heart. In addition to the villages, towns and cities of Ireland,  she brought her God-given talents throughout the world: America, Australia, Japan, China, Libya and throughout Europe.

The joy, camaraderie and goodness she dispensed cannot be measured. This is her legacy which will be promoted and enhanced by new generations. This is her living monument.

To Mary we extend our heartfelt sympathy and we share her sorrow at this sad time. We know that she will be comforted by many happy memories and good friends.

Tipperary’s Queen of song has left us but Nora Butler will live on in fond memories and our fine traditional songs. Her name will never be far from the lips of those who cherish our cultural and Christian traditions.

In Nenagh, mourners lined the street to say their last farewell to Nora Butler as the cortege moved through the town, some playing the music she had loved so well for all of her life.