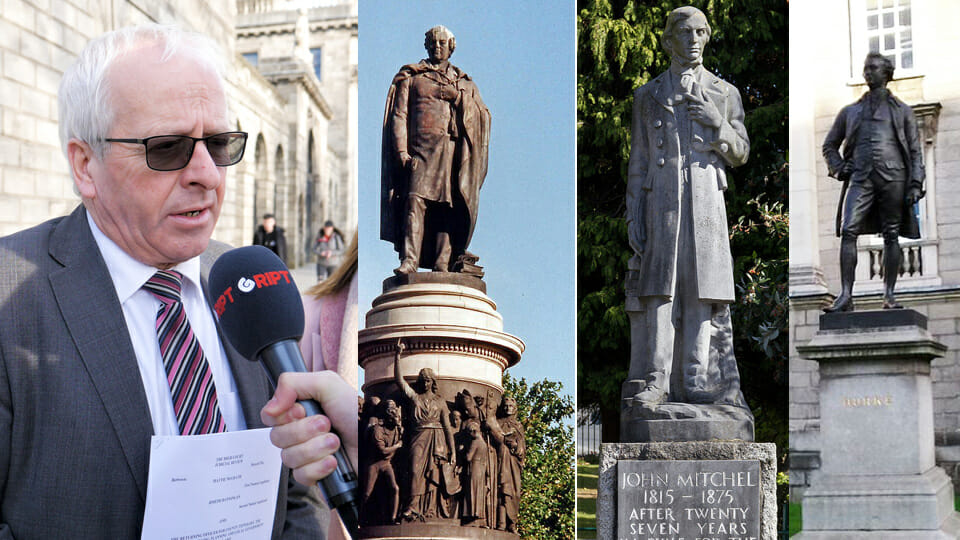 The push from several quarters to start tearing down statues of Irish historical figures and rename GAA clubs has come under fire from a TD who said “it’s like the Black and Tans controversy all over again”.

Mattie McGrath, the independent TD from Tipperary, hit out at calls from left-wing politicians and agitators – and also from Fine Gael leader Leo Varadkar – who are calling for statues of some of Ireland’s most well-known freedom fighters  to be removed and for GAA clubs to be renamed.

“It’s like the Black and Tans commemoration controversy all over again, and Fine Gael, as usual, are totally misjudging the mood of the people. TDid they learn nothing from that mistake last night,,” said Deputy McGrath. “They’re joining with left-wing extremists to try to attack our heritage and even our games and national culture because they always want to down anything they see as patriotic or loving the nation.”

He said the Irish people had never been part of the slave trade and that this was not a racist country. “We’ve welcomed people from all over the world and were treated no better than slaves ourselves for years,” said Deputy McGrath. “This is just Leo and the looney left trying to jump on a bandwaggon. People will see through this nonsense – there’ll be the same backlash as there was for Charlie Flanagan’s plan to commemorate the hated Black and Tans.”  He said people had a strong affinity to their GAA clubs and to local historical figures and that this should be respected.

A petition has been opened online to remove statues and rename GAA  clubs named after the famed Fenian leader, John Mitchell, whose writings on the Famine and on the plight of the Irish people inspired many nationalist leaders, and spurred the 1916 Rising. Critics say Mitchell in later life supported slavery in the U.S, but his defenders point to his work and writings supporting Irish freedom and an oppressed and people as reasons to admire much of his life and work.

The row will likely put Sinn Féin’s woke politics in the spotlight as this commentator noted:

The British Equality commission or the PSNI are going to demand John Mitchell's statue be removed for reasons of anti-racism and you just know Sinn Féin are going to simply shut up and take it.

The National Graves Association who work to maintain and upkeep republican monuments, also hit out at Mr Varadkar comments saying their “organisation had sole responsibility for the care and maintenance” of the monument including a statute of Seán Russell in Fairview Park referred to by the Taoiseach.

“Many of the recent comments circulating in the media regarding Seán Russell are unknowingly or deliberately incorrect. The statue in Fairview Park is dedicated to all the brave men of the Forties who died for Irish freedom. If there are statues that “we need to talk about”, there are numerous statues in Ireland that might be subject to consideration when one looks at our colonial past. There would also be a great number of street names that would need to be changed,” they said.

“The National Graves Association is a voluntary organisation with no political party affiliations. Fascism, in any form, should always be condemned without reservation. Seán Russell was a traditional Irish Republican and the statue serves as a reminder to following generations of the fragile and difficult situation that Ireland was experiencing during the 1930s and 40s. Churchill’s plan to invade Ireland was a real and palpable threat. We, along with all right minded people, strongly condemn the murder of George Floyd, as indeed, we have always condemned racism and intolerance in all its forms. The recently stoked-up racial tensions across the world should not be used as an opportunity to rewrite Irish history,” said Matt Doyle, Secretary of the organisation.

People before Profit yesterday called for a monument to Christopher Columbas to be removed in Galway. The monument was later vandalised.