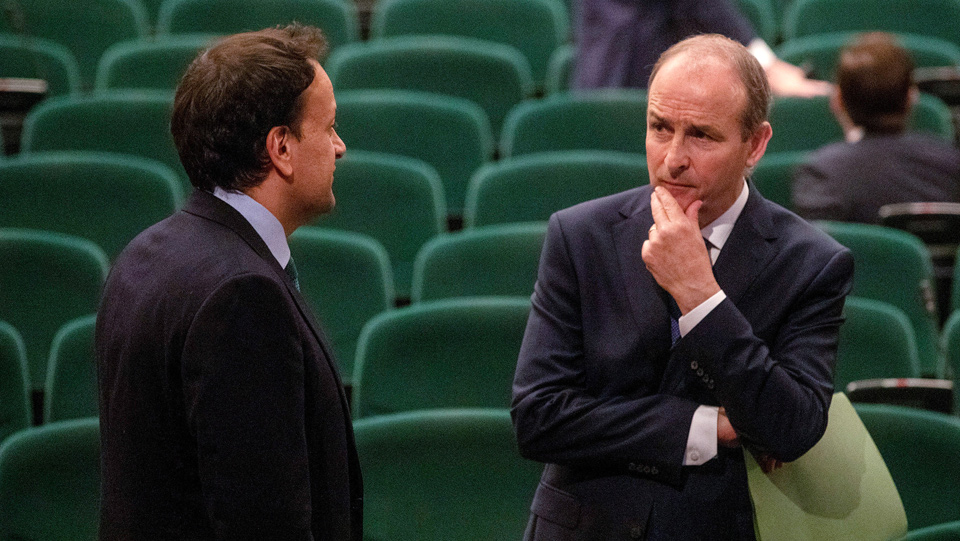 To make sure everyone suffers equally, Gardaí are now making spot checks at Tesco and Dunnes and Aldi to be sure that nobody is buying coats or scarfs or underwear. Here was Tánaiste, Leo Varadkar, explaining how he was saving us from the self-harm of buying coats and other ‘non-essential’ goods this winter.

Tánaiste Leo Varadkar says mixed retailers should separate stock and only sell items that are essential. He says gardaí have been contacted about this and the restriction will be enforced. pic.twitter.com/XQqTykAdIm

Sounds fair doesn’t it? If the clothes shop down the village can’t open because the central planners have decided people don’t need coats for growing children in winter, then the big chains should also suffer –except, of course, Amazon. Like the banks in 2008, Amazon is too crucial and too big to fail.

This governmental obsession with planning and deciding what you need is a controlling idea-pathogen that is spreading around the world and causing mayhem and revulsion, because it is so obviously illogical. It didn’t start in Ireland of course – don’t expect anything to originate from our middle-manager government gombeens – but any bad idea relating to the Covid madness that has been tried anywhere is bound to be copied by our cravenly visionless government.

In Wales, where the recent stupidity of nation-wide house arrest and cordoning off of “non essentials” started, they have even decided that sanitary towels are non essential. However, vodka is essential. Got it!

@Tesco can you explain why I was told today that I can’t buy PERIOD PADS as I’m sure they are essential to women ?!!! But I can buy alcohol it doesn’t make sense 🤦🏽‍♀️

Where do you start the argument with policies that are so deranged? One enterprising Welsh man decided to shop in just a mask and his underpants, while making the very cogent argument that clothes (other than a face covering) is no longer essential according to the governmental diktats.

A man was kicked out of a supermarket after he attempted to enter the store in his underpants and a face mask in protest of a new rule in Wales that deems clothing as a “non-essential” item. https://t.co/ORePsGrkOH

It’s odd that people like this semi naked gent get dog’s abuse on the twitter dung heap. The conformity of the herd madness is stunning, and the applause coming from the lock-down totalitarians for what are quite frankly the repressive tactics of a police state leave me worried for the cause of liberty.

Astonishingly, the heavy-handed tactics of the police in Victoria, Australia, in suppressing the words and actions of ordinary citizens seems to be applauded by the population at large.  So when a pregnant woman is arrested for sharing a Facebook post about a lockdown protest, and a disabled woman is ordered off a bench where she was resting and made march up a hill, it seems to get cheers from (a worryingly large part of) the watching public.

But the continued nonsense does seem to be having an effect. Some people are angry with the repressive nature of these completely illogical measures. We have seen more than one video of people completely losing it. Incidents like these are a canary in the coalmine. This is not only a tell for a mental health crisis, but it could be a tell for a wider breakdown of our society, and a capacity for it to even function.

I have no hard evidence for this, but these nonsensical diktats that are repressively being enforced on us all –and felt most harshly by the poor and needy- are demoralising to the nation. It should also be of concern to everyone that history shows us again and again that when a nation’s police is used against its citizenry, ordinary crime escalates. It is for this reason that even during the terrifying regime of police surveillance in the USSR and East Germany, the citizens of those unfortunate countries were also the victims of petty and violent crime at much higher rates than free citizens of the West. That is something we should all consider as we bumble towards a political philosophy of the centrally planned state.

We see “rules for thee but not for me” inconsistency in this covid world. The New York Jewish Deli (the Left seem to be extraordinarily petty in pursuit of the orthodox NY Jews) owner who was fined for opening his door to let in air is a stark contrast to the New York Mayor’s support and mollycoddling of the BLM antagonists.

🇺🇸 — WATCH: Jewish restaurant owner in New York nearly in tears, pleads with inspector who fined him despite following the guidelines:

“It’s not fair that only because my doors are opened I’m getting a violation. I’m struggling here every single day. It’s Hard For me” pic.twitter.com/q932r9kc3o

Similar incidents are observed all over Ireland. Last Saturday I talked to a man with a hurley-mending business about how he was dealing with the new rules. He rents a small workshop in the GAA grounds but he was told that he had to operate a text and drop system and couldn’t open his door. So he couldn’t open his door to let air circulate in a confined workshop where he operates sanders and saws. He sells hurleys and people can’t come into his workshop and pick out a hurley either, they can’t even walk up to an open door and look inside.

This will affect sales which he was banking on in the Christmas period. Nobody at the club would give him, in writing, what the restrictions he must abide by were. They were passed along informally by word of mouth and one assumes that they might change any minute.

Incidentally, on Saturday morning at this club there were tons of families attending the club nursery, and there was a coffee kiosk which had doors wide open and people gathering at sales counter. It looks like there are two arbitrary sets of rules in operation here.

Of course, the fact that independent business owners are penalised while the public sort of ignore the rules just shows that the country doesn’t really believe we are facing a problem of plague proportions. The Golf-Gate scandal was proof positive that there are plenty of politicians who don’t believe it.

There was a certain amount of schadenfreude in seeing the Dara Calleary and Big Phil and Co fall on their own sword.  Some on the pro-lockdown side were quick to observe that it is a double standard to demand their resignation if you didn’t believe that Covid19 posed an existential risk; but that is the wrong perspective.

The correct perspective is that these politicians obviously didn’t believe that Covid19 posed an existential threat and yet they went along with the consensus on lock-down instead of voicing their objections in the Dail where they had influence. If this is the case they are obviously cowards without principles who are ruled by the consensus in the room, and for that reason they don’t deserve to lead. They are visionless yes men.

But the madness continues and there is danger it will bring us to absolute ruin. On RTÉ’s Prime Time last week, we had a bizarre discussion involving economist Dan O Brien, Prof John Lee, and Tomás Ryan. While Lee and O Brien talked about empirical evidence and the dangers posed by the virus and the cost of the response, Ryan obsessed about closing the country for a period of at least 10 to 12 weeks.

First on tonight's show, former Prof. of Pathology Dr. John A. Lee disagrees with the lockdown and says that we're acting as if this virus is a "new plague". #rtept #COVID19 pic.twitter.com/ZtBS5umV4O

Ryan offers the nuclear opposite of what Lee and O’Brien argue. They warn that the lock-down will be hugely damaging and that lock-down will only slow the spread, whereas Ryan sounds a bit like a scientist obsessed with the experiment regardless of cost.

UK Conservative MP for New Forest West, Desmond Swayne, made a blistering attack on the UK government’s willingness to listen to this sort of scientific lunacy. Speaking in the parliament he said:

“If you were to ask a scientist how do you stop a virus that spreads through human contact, do not be surprised if he answers telling you that you must stop human contact… it falls to us however to decide whether the price is worth paying in terms of the misery and unemployment that it generates.”

In one of the few sane analysis of the problem he adds:

“it’s no good to say that almost every other jurisdiction in the world is following basically the same policy. That would strike me as herd stupidity”.

It’s worth listening to his speech here:

The biggest philosophical divide in this debate is not between science and “science deniers” as the eternally smug woke like to flatter themselves with – in fact the biggest arguments against lock-down is coming from the empirical analysis of its consequences. It is between  the competing ideologies of central planners and freedom; what the political philosopher Thomas Sowell calls the “unconstrained” and “constrained” vision of life.

The constrained view in his analysis sees that life is tragic and there are many competing needs that we have to weigh up in our decisions; and that the best person to make those decisions is the one who will bear the cost. The unconstrained view is that a centrally planned society can eradicate all the problems of humanity if it is only engineered by the credentialed elite.

The paradox in the unconstrained view is that the credentialed classes who control society never suffer the consequences of their decisions. They have never worked a blue collar trade in their lives. They experiment with the poverty of others but will never be made redundant or suffer a wage reduction in their posts in the universities and the government. While they are on the public purse they externalise the cost of their errors (some of which are catastrophic) to the working class and the middle class entrepreneurs who have skin in the game.

We should start making them take the consequences of their own folly. When their theories fail they externalise the cost so that you pay it. If only there was a way of firing them!

The Government must not indemnify vaccine providers

Assisted suicide was meant to bring DOWN the number of other suicides. Instead they went up by 34%.