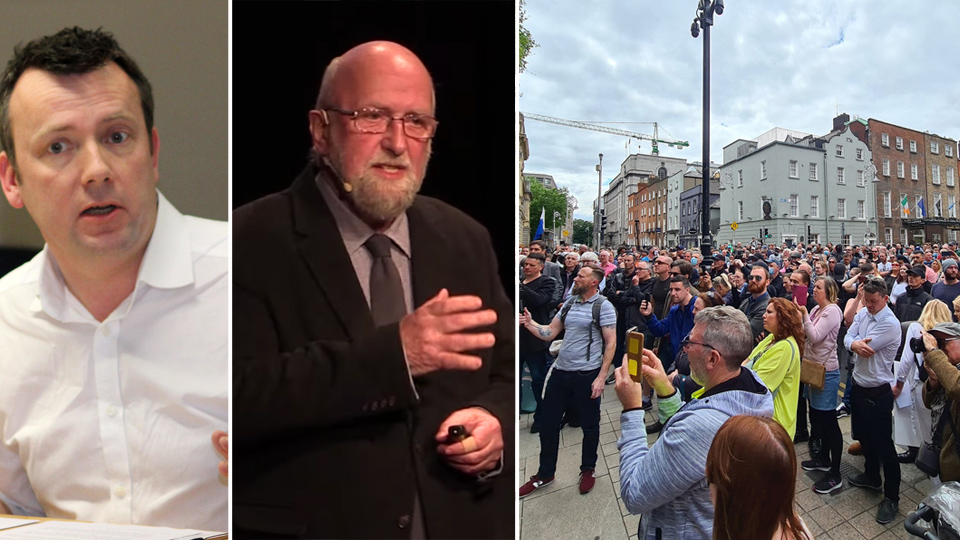 The left, far and near, are still vexed over last Saturday’s protest outside Leinster House. ‘Anti Fascist Action’s’ Facebook page is like what you might find when a soccer hooligan firm loses face after fleeing ignominiously from some “tasty geezers.”

They refer to someone at the rally as wearing the “cheapest wig in the shop,” and to the large crowd as consisting of “alt shite carpetbaggers.” Intellectuals they are not. Perhaps they ought to start a running club?

Not to be outdone, the eclectic Brendan Ogle has posted a badly written and incoherent diatribe on the Unite union’s website. According to Brendan: “There was a fascist demonstration outside the Dáil last Saturday in pursuance of building an Irish Nazi Party.”

Everyone else thought it was about the influence of Peter Tatchell on Irish policymakers and Minister for Children’s plans to introduce legislation to facilitate medical intervention in the cases of children under the age of 16 suffering from gender dysphoria.

Ogle does not mention that, and perhaps he sees his next career move as a sort of Irish Pasionaria leading the fight against those whose “forebears” he claims threw “rotten fruit and vegetables” at the men of 1916!

Ogle once saw himself as a potential Irish Arthur Scargill but messed that one up when frightening the bejaysus out of other ESB union reps by threatening blackouts. Not to mention his once describing his own members as “spoilt.”

Then came the water charges campaign which seemed to offer an alternative path to political importance.

I was present, along with Dublin Sinn Féin city councillor Daithí Doolan, at a meeting during the water charges campaign with Ogle and Dave Gibney of Unite.

Ogle was angling for a free run at a Dáil seat which would have meant Sinn Féin and the far left parties not standing wherever he planned to. Myself and Daithí were there at the behest of the commissars who were anxious to know how serious an electoral threat Ogle was to the Shinners. We assured them that a bigger threat would be if the Monster Raving Loony Party threw their hat in the ring.

In March 2018 Ogle declared his intention to form a new party, but that did not last much longer than the press conference.

When his remarks on Saturday’s rally were described on the twitter machine as “disgusting,” Ogle responded with a reference to “made up Irish names.” Now I have a weird vision of him asking Eamonn Ryan for a Senate nomination …

Fergus Finlay is another who has joined the fray in defence of Roderic O’Gorman. As an interesting aside Finlay wrote a piece for the Irish Examiner in December 2013 defending Ogle when he was under attack from more sensible union people.

Finlay describes those with the temerity to criticise O’Gorman and his plans as “the most repellent political cave-dwellers in the country,” and “rodents” to boot. In a typically grandiose “open letter” in Tuesday’s Examiner, Finlay warns O’Gorman that “the system” will be trying to wreck his rainbow buzz along with the ‘alt right’.

If you were not familiar with Finlay’s career you might form the impression that he had spent decades in the Dublin mountains with only the support of the beleaguered liberals of Dalkey and Sandycove to keep him supplied with tofu and cigars while he battled the forces of obscurantism. And with no thanks for it either.

Finlay’s heroism took him from being among other things chef de cabinet with Labour to CEO of Barnardos. He retired in 2018. Barnardos in common with most NGOs and charities is heavily dependent on state funding and the main conduit is coincidentally the department under the responsibility of the Minister for Children. No point in pissing up against the tent as Fergus well knows.

In 2018 Barnardos received €16 million from the state; the bulk of it from TUSLA which comes under the children’s department. It employs 430 people so it is safe to assume that most of that money goes to pay salaries and wages. It has a low footfall it would seem among actual children and 42% of its 2018 cases were referred to it by TUSLA.

That aside it is apparent that Barnardos regards itself as a liberal advocacy group, campaigning in support of gay marriage.

It has no official policy in Ireland as far as can be told on transgenderism, but one of its main administrators and fund raisers is Alexis Riva who is a director of Transgender Equality Network Ireland.

So, it is not difficult to see why Barnardos former CEO should be defending O’Gorman and his plans that have been discussed and formed by transgender activists, and without any parental consultation. You know, the annoying people who actually have children that will be subjected to this unnecessary interference in their education.

As Saturday’s large turnout and the reaction to O’Gorman’s actions prove, perhaps there is more resistance to the next move in the liberal playbook than they expected. The hysterical reaction of the melange encompassing antifa, Ogle and Finlay among others is more proof of their petulant intolerance of dissent.

NPHET tells high court: The vaccines might not work, you know