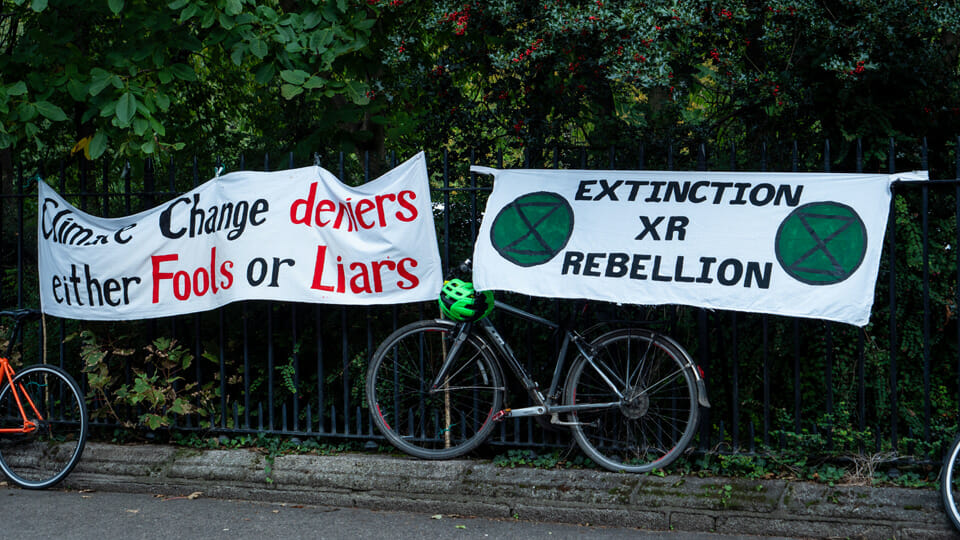 The left’s embrace of climate change as a central part of its platform is in some ways a curious marriage. There has always been a pastoral rural element on the left which was suspicious of growth, but that tended to be either anarchist or agrarian populist in nature.

The Marxist oriented or originated left has traditionally not only been aggressive in its championing of macho industrialisation but contemptuous of tree hugging worriers who questioned the Great Five Year Plan, and Mao’s insistence that every house have a mini iron smelter. It is noticeable even now that the western left is far less censorious of the totalitarian polluting robber baron behemoth that is the Peoples Republic of China than it is of privileged white people who use airplanes to go on holiday.

So where did the hard left’s concern for snails and Amazonian shrubbery come from?

Despite the fact that socialism as an economic system was conclusively shown to have failed and therefore has little appeal, the left still needs a larger narrative than just looking after workers and their families which is the legitimate foundational basis of democratic socialism or social democracy. For the hard left, still enticed by totalising visions, that is not sufficient.

The far left has always been drawn to catastrophism. That is the continual repetition of predictions of the imminent collapse of capitalism, or world war, or the victory of fascism. The only thing to avert that being to place ones faith in some self-appointed revolutionary vanguard who would take power on behalf of the people. It worked for the Bolsheviks and their imitators, including Hitler who just replaced the bourgeoisie with Jews.

Climate change and the Cassandra like warnings of imminent doom is a perfect fit for the post socialist far left. Not only is it a good tactic to frighten people, but it also it does not require any rational solutions. The solution is to overthrow “the system” and replace it with whatever the central committee deems appropriate. Climate change catastrophism also lends itself to totalitarian collectivist schemes in which individual freedom and comfort are surrendered in the name of a higher goal. No longer the creation of a communist nirvana, but saving the planet itself.

Perfect. So where this turn take place? In my opinion it dates back to the 1970s when the far left, particularly in the United States abandoned class and adopted the politics of identity. It was a tactical move to contest the liberal constituency regarded as the preserve of the Democratic Party. Interestingly that has been a success not in terms of creating a left pole outside of the DP, but in moving the Democrats towards ever more extreme positions on race, gender, abortion and so on. And ironically in so doing further alienating the Democrats and the left from their traditional voters in the working and middle classes.

Bernadine Dohrn and Bill Ayers were leading members of the Students for a Democratic Society which began as a relatively sensible American radical organisation in the tradition of trade unions, but by the late 1960s had veered towards ultra leftist adventurism. Dohrn and Ayers deliberately wrecked the SDS and founded the Weather Underground which declared war on America.

Inspired by Marcuse they dismissed the black and white working class as “squares” and “uncle Toms.” Their new heroes were jail psychopath George Jackson and even Charlie Manson. Their violence was mostly low level but lasted for a decade until Dohrn and Ayers decided to abandon the underground. The circumstances of their surfacing in 1980 and the leniency with which they were treated has been cited as evidence that they were agents provocateurs for the Feds.

They may well have been but of more interest is how they were able to play a role in having the Democrats invest in their new political agenda. As part of abandoning the armed struggle they established Prairie Fire and its manifesto written by Ayers outlines the need for a new commitment to the politics of race, gender, and yes climate change,

And this was in 1974 when “ecology” was the preserve of chaps in tweeds collecting insects and claiming that the earth was a living being. Stuff that was derided by the hard chaws on the left as petit bourgeois nonsense. Build the steel factories and nuclear generators and fuck the snails, was the motto of the unreconstructed reds, epitomized in Ireland by the Stalinist stickies.

Just as Farrakhan and Sharpton brought the politics of anti Semitism and racial hatred into the Democratic Party, so too did people like Ayers and Dohrn introduce it to the agenda of the former incendiaries, including climate catastrophism. Not only that but they were both close to the Obamas in Chicago and supported Obama’s first Presidential campaign. Obama and Ayers were both members of the liberal Woods Fund which was chaired by Ayers. Obama wrote a glowing review of one of Ayer’s books. It would be like a former IPLO member becoming part of Leo’s think tank.

There are of course varying conspiracy theories about this but they are beside the point. The political fact is that a political agenda authored by former Marxist insurrectionaries has become the agenda of large segments of one of the great American political parties. That is extraordinary. And more so when you consider that the masked “anti fascists” attacking old people and the Extinction Rebellion anarchists calling for the destruction of society and its replacement with some dystopian Cormac McCarthy subsistence war of all against all, will almost invariably support whatever candidate the Democrats select to run against Trump in 2020. Just as the Black Lives Matter rioters rowed in behind Hilary.

Come on: “Zero Covid” is a terrible idea.

For many, the Mothers & Baby Homes story has a personal dimension. This is mine.