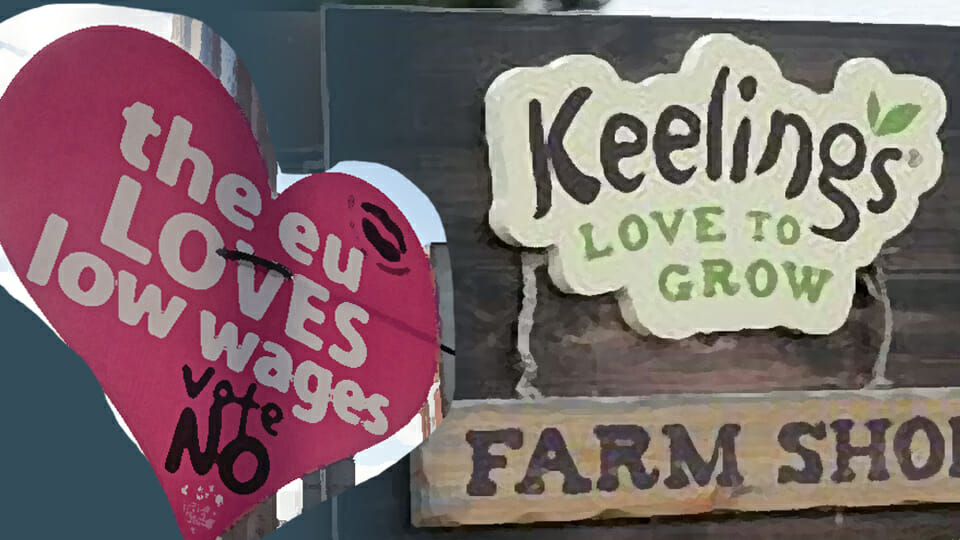 The Keelings controversy about has brought public attention to how EU and related member state legislation allows agencies – and those who contract migrant workers from them – to avoid domestic minimum wage and other requirements.

As everyone knows, the current furore began when a photo published was which showed some of the 189 migrant workers from Bulgaria walking through Dublin airport which prompted days of commentary not just about social distancing but also why Keelings were flying workers into the country in the middle of a pandemic and a massive uptick in unemployment.

The answer of course, is that Keelings and other companies fly in workers from Eastern Europe because they can pay them less than what they would need to pay Irish workers, a situation that was compounded by rulings made by the European Court of Justice around the time of the Lisbon Treaty.  A video released last week showed a former Keelings worker from Bulgaria claiming that he earned €1,200 a month for fruit-picking, but that an agency fee of €500 was taken from his Irish earnings, while Keelings also charged €95 per week for shared accommodation.

Eurostat says the Irish minimum wage is €1,656 per month (€1,613 in 2018) so, if the claims are correct, companies like Keelings could clearly benefit from being able to undercut Irish workers.

A key ruling in all this is the 2007 Laval judgment in the European Court of Justice. Swedish trade unionists, who claimed the right to represent agency workers, took legal action claiming that a construction company Laval, who had won a public tender to renovate a school in Sweden were employing workers from abroad who earned 40% less than their Swedish equivalent. The EU Court ruled against the unions saying their demands were a hindrance to the free movement of services.

In effect, and despite EU and national commitments to ensuring equal protections and remuneration, the prerogatives of “freedom of movement of labour” enables businesses to override minimum wage requirements for agency employed migrant workers.

According to Prof Stefano Giubboni, “European action is increasingly based on “governance mechanisms” defined outside the perimeter of the classic Community method and even of EU law.” (European Labour Law Journal, Vol. 6 (2015), no. 1)  In other words it is the needs of capital that define the criteria for the application of minimum wage and other legislation.

Hence the ability of agencies to supply workers to Irish companies who do not receive the Irish minimum wage, but a wage contracted in their country of origin with the contracting agency.

The strengthening of Irish minimum wage legislation was intended, although this was never stated explicitly, to restrain the headlong race to the bottom that took place in many sectors after 2004 with the accession of eastern and central European states, when tens of thousands of whose citizens came to the country.

Downward pressure on wages and conditions as a result of immigration was already a problem and in 2002 the ESRI implicitly recognised that as a factor in 38% of workers in the hospitality sector being paid under the then 6 Euro per hour minimum wage (ESRI, 2005.)

Theoretically, EU Directive 2008/104/EC which came into effect in December 2011 guarantees equal treatment including remuneration for agency workers. The Protection of Employees (Temporary Agency Work) Act 2012 transposes that to Irish domestic legislation. Except it clearly does not – as the Keelings and other examples prove.

In any event, the Act is replete with exceptions. Agency workers with a “permanent” agency contract are not entitled to the minimum wage here.

Where the agency pays the contracted workers, as in the Keelings case, then the agency – rather than the Irish contractor – is considered to be the employer.

Part-time agency workers are excluded from the legislation.

What is clear is that states like Ireland and its workers cannot rely on the EU and its domestic representatives to properly protect the interests of the citizens.

As we face into a predicted massive economic crisis attendant on the ending of the pandemic, there is the potential for further assaults on national sovereignty and the rights of the citizens in what are supposed to be sovereign independent states which have ceded limited powers to a central power around the European Commission.

The battle for the right of workers to decent wage still lies ahead of us, it seems.