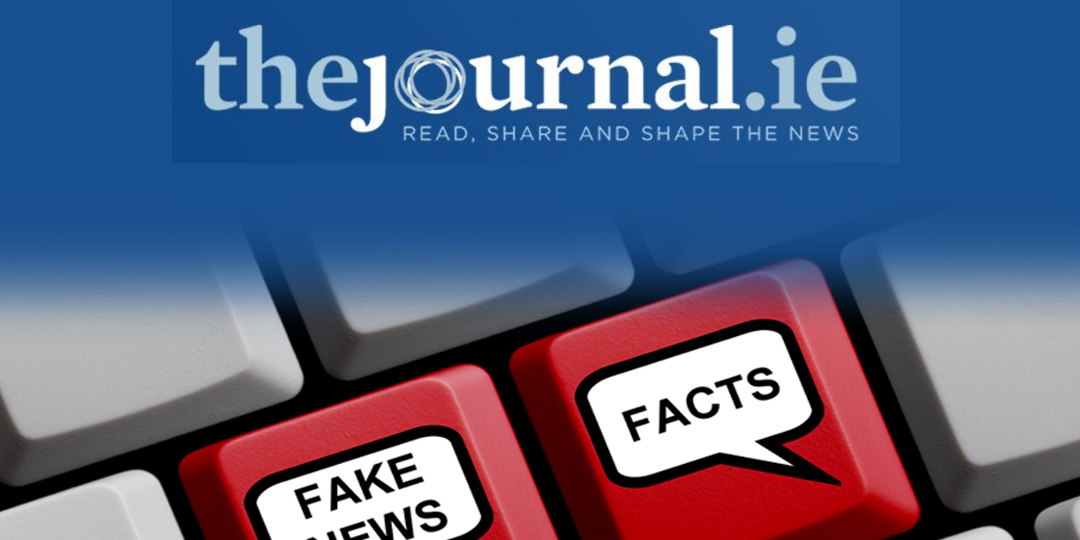 TheJournal.ie has gone for gold in the clown media olympics this week, by declaring that the type of covid misinformation that is most dangerous and difficult to combat is the type that’s actually true.

“OVER THE PAST fifteen months, Ireland has been battling a surge of misinformation about Covid-19 and the effects of pandemic-related social restrictions on people.

Often, this misinformation takes the form of patently untrue claims about the virus, lockdowns or the contents of Covid-19 vaccines. But occasionally, false claims can go viral on social media because they are more subtly misleading.

One such tactic is the misuse of official statistics in social media posts, where individuals take legitimate information from government sources and omit key contextual data or simply misrepresent what statistics say to suit their own narrative.This method is regularly used in discussions about the number of people who have died in Ireland over the course of the pandemic.”

They go on to say that, in their view, while people are giving true and accurate data, they are omitting key details, therefore making what they are saying an example of “misinformation.”

But who gets to decide what a “key detail” is? Apparently, to The Journal, taking facts and figures that even they accept as true, from official sources, but interpreting it in a way that suits a position they don’t personally like is tantamount to “misinformation.”

You know, many of us are old enough to remember back when that was just called “making an argument.” Now, apparently, it’s a “bad faith” misinformation crisis threatening the world as we know it, and should be reported to social media companies:

“DCU’s Eileen Culloty recommends that those who encounter posts online with false information should report it to the social media platform.

“It is important to report things in the same way that it’s important to hate speech [sic] when you see it, because these messages have to keep filtering back to the platform,” she says.

“If you’re unsure about something, you should look for reliable sources. If there’s a major story, it is going to be reported by journalists and the news media. If you’re only seeing a claim being discussed by someone online, that’s suspicious in itself.””

Don’t listen to anything that’s not reported by journalists and the news, she says. Only the sanctioned mainstream media outlets are the official arbiters of truth, and anyone contradicting them is clearly acting in “bad faith.”

Because as we all know, no journalist has ever been wrong about anything, right? Nor have the media ever intentionally ignored a big story because of their own ideological biases.

This is the same media landscape that not only ignored Gript’s #ZeroCovidLeaks stories when they were initially released, but they are still ignoring it to this day. As you read this, no legacy outlet in Ireland has covered this story, where many of Ireland’s most prominent “health experts” said they wanted to instill “insecurity, anxiety and uncertainty” in the general public, among other things. Those lads are still wheeled out on the news every five minutes and most of the general public are none the wiser.

Leaked documents show that members of the Zero-Covid advocacy group @ISAGCOVID19 , whose public facing campaign group is @WeCanBeZero , were recently instructed to "look for ways to increase insecurity, anxiety and uncertainty."https://t.co/qx8j2PG72t

So suppressed is this story, in fact, that when award winning journalist Ewan MacKenna brought it up on Newstalk, they actually seamlessly cut out the section of the interview where he mentioned it in the final upload.

Award-winning journalist @EwanMacKenna brings up Gript's #ZeroLeaks on Newstalk, and they edit the section out in the final section on their website.

But apparently, according to Eileen and the Journal, this is the media who we should get our information from exclusively. Don’t put your trust in anyone except them.

This whole thing just reads like the Journal is terrified that views they disapprove of, and are frightened that alternative media outlets are gaining more traction with the general public than they are. And maybe they’re right to worry, with this kind of carry on.

The article goes on:

“These claims often contain nuggets of truth which make them harder to debunk, and their use of data from official sources can lure people into believing they are true even when they don’t tell the full story.
…
Dr Eileen Culloty, a professor at Dublin City University who specialises in disinformation, explained how the nature of such claims often make people want to share them with others.

“Most of the problem content that gets shared is things that have a grain of truth but are then missing some context or have a slant that gives you a distorted perspective, and that’s what we see a lot with Covid-19,” she told The Journal.
…
“In the population as a whole, most of us lack data literacy and scientific literacy and so we’re hearing these statements and seeing data but we don’t necessarily have the skills to assess it,” she says.

“That makes it easier for people to present in a biased way or miss out context and many of us just don’t have the skill to evaluate it for ourselves.”

Eileen’s thesis here (and by extension the Journal’s) appears to be that only someone with proper scientific acumen and credentials has the skills to properly assess covid data, and therefore nobody else is qualified to speak on it.

I’m not sure how they square this with the fact that Eileen herself has a PhD in Communications Studies from DCU – which is clearly not a science degree of any kind – and the previous claim that one should only get their news from journalists, who, again, are not scientists.

The argument here essentially amounts to “No person without scientific qualification should speak about covid-19, unless they agree with me.”

Moreover, watch the Journal tie themselves into a pretzel while trying to explain why the small number of excess deaths in 2020 does not mean that our covid response was overblown:

“It’s true that the total number of deaths registered this year – 31,134 – is not a massive jump from previous years. However, this does not mean that the pandemic is not real.

Significant public health measures were put in place, like restrictions on movement, school closures and changes in our social behaviour, to try to prevent people from becoming sick and dying.

The full extent of what might have happened if those measures were not implemented cannot truly be known.”

Except, it can be known, because Sweden exists.

Sweden, as we all know, did not lock down its economy or country at all, and, as reported by RTÉ news last month:

“Mortality statistics also show Sweden had a lower than average excess mortality in 2020, compared to the rest of Europe.”

For the first time this year, Sweden's incidence rate of coronavirus cases has topped European Union figures, the EU's health authority said today, but associated deaths are among the lowest. https://t.co/IpWDYcSkcx

See? I even used an approved Mainstream Media Outlet™, just for you guys.

So the claim that it “cannot truly be known” what would have happened had we not locked down, like we have absolutely no idea and it’s anyone’s guess, is just totally dishonest.

The fact is, the Journal is perfectly entitled to be pro-lockdown, just like anyone else. They can make their arguments for their position, they can try to pick apart anti-lockdown data and statistics to their heart’s content. Nobody has any problem with that.

But when you have what is ostensibly a “news” website literally quoting someone who’s advocating for the reporting and censorship of people for using true information in a way they disagree with, that’s when their credibility falls into the paper shredder. That’s not fact checking, it’s propaganda.

At this point the Journal might be the most biased liberal media outlet in the country, and that is an impressive feat if I’ve ever seen one.

US Whizz Fauci: We might be wearing masks in 2022, you know