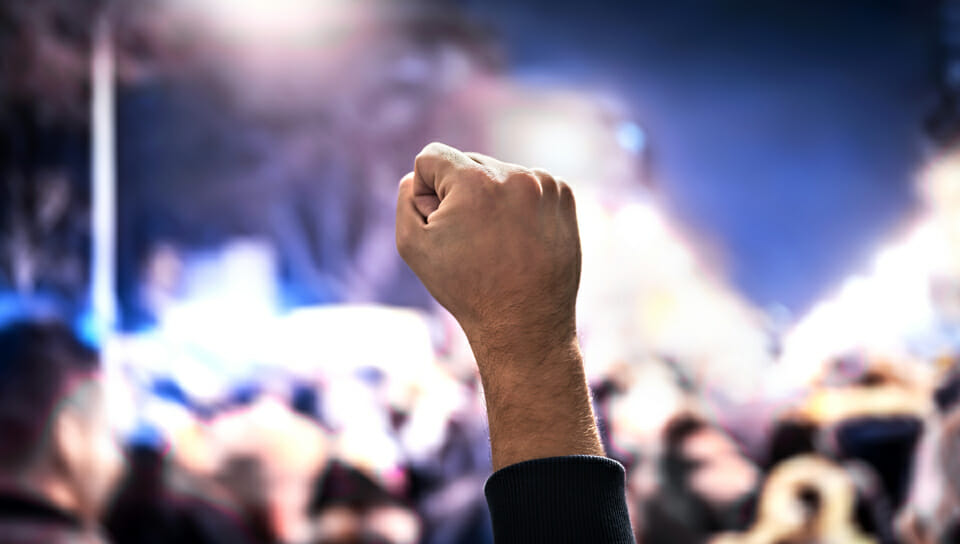 It would seem that some of those involved in last weekend’s protest opposing American racism would rather like to transform this “movement” comprising the rag tag and bobtail of the ultra-left into one focusing on alleged racism in Ireland.

Since the protest – which has now been found to have breached social distancing regulations even though the Gardaí, who had courageously apprehended people fishing and playing football in parks, actually did nothing about it at the time – that agenda is clearly in evidence.

The narrative now is that Ireland is a racist country and therefore one requiring self-flagellation on the part of the natives or face the penalty, presumably, of having to face similar scenes as we are witnessing on our TV screens. One of the participants in the Dublin events has been on a plethora of media outlets explaining how Dublin is little different to Birmingham, Alabama in 1956.

Another of the protesters, Lawson Mpame made it clear that the protest was primarily about Irish peoples attitudes. He claimed that black people here are made feel like “second class citizens and we don’t have the same rights as you guys. That has to change and that needs to start now” he told the Irish Times.

So it would seem that Ireland now has a Black Lives Matter movement although it is not clear whether it has the imprimatur of the American body. The Irish Network Against Racism which is publicly funded through Pobal is one of the organisers of the Black Lives Matter protest in Galway this coming Saturday.

Given that Pobal acts on behalf of the Department of Rural and Community Development and the Department of Health – both of which are key parts of the state’s Action Plan to combat the effects of the coronavirus – will INAR’s funding be impacted by their organising an event that will be in breach of social distancing regulations?

The Galway branch of INAR incidentally has distinguished itself by its intimidating behaviour towards pro life advocates, opponents of Islamic extremism and others. One wonders then if it will be able to keep those thuggish elements from emulating their soul brothers and sisters stocking up on Nike trainers stateside?

To have an entity called Black Lives Matter here implies that black people are under threat of violence and indeed of being killed by the police. Is this something the Gardaí has been engaged in?

When Toyosi Shittabey was killed following an altercation between two groups of young people in Tyrellstown in 2010 there were shameful attempts by the ultra-left and virtue-signaling liberals and, of course, a range of NGOs to whip it up into a pretence that the killing had been racially motivated.

It had not been, and the prosecution counsel Brendan Grehan SC referred to the initial clash between the two groups as “unsavoury” and that it had not reflected well on anyone involved on either side. It was not an untypical event, unfortunately, in north Dublin where most such incidents do not merit the attention of “anti racist” campaigners because they do not suit their narrative.

There is already an array of publicly funded bodies which have racism, real and imagined, and advocacy on behalf of migrants and asylum seekers as their brief. That is without mentioning the political parties, trade union, church and other organisations who have taken upon themselves with an evangelical fervour the paternalistic and indeed racialist care of those who have come to live here from countries outside of Europe.

I use the term “racialist” on the grounds that all of these well meaning (and they are not all well meaning) entities obviously regard themselves as having taken up what colonialist’s used to call the ‘white man’s burden’: “To seek another’s profit, and work another’s gain.”

They are not racist of course in the absurd sense of believing that black people are congenitally not as intelligent as others; rather that they regard people of African descent in particular as an almost prelapsarian variety of our common species who are incapable of badness, and if they do err then they are not really responsible. They are the Rose Sayers of the NGO racket.

Dublin is changing and will change even more under the lemming like rush to turn the city and county into a high-rise dystopia under Project 2040 and what follows thereafter.

Attempts then by the liberal and ultra left to piggyback on current events in the United States as part of their self-serving agenda and to create a false impression of a rampant racism on the part of the “white Irish” is not going to do anyone any favours.

Where is the Dublin Covid surge?