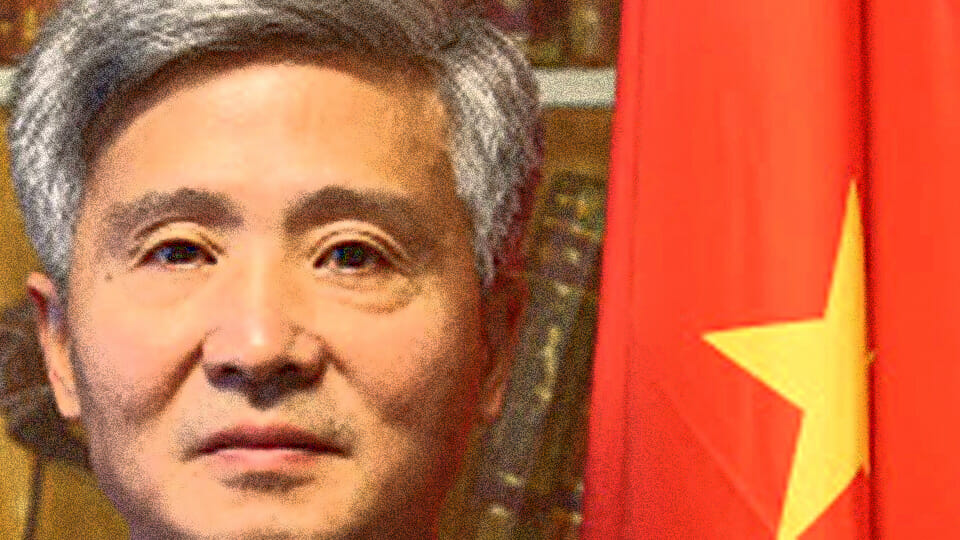 On Saturday, The Irish Independent carried a sponsored propaganda…scrap that..a sponsored Editorial ’opinion’ piece from the Chinese Ambassador to Ireland.

In one sense it is a masterful display of deflection.

In quite another, and more pertinent sense it is a nauseating and infuriating piece that has about as much grounding in reality as the view that Mao Zedong was a misunderstood humanitarian.

The article is called Blame game: Wrong and harmful remedy to Covid-19.

In it the Ambassador rightly recalls that “during the Black Death, Jewish people were attacked and killed throughout Europe because they were blamed for it” and that “when a typhus epidemic broke out in Britain in 1847, Irish immigrants were targeted for transmitting the “Irish Fever”.

He then goes on to say however, that “those blame games did not provide any help, but only led to racial, religious or political discrimination, stigmatization and persecution.”

The connection we are meant to make here of course is that much of the ‘anti-China’ rhetoric that has been floating around with respect to Covid-19 is just another historical example of racism, ungrounded in the facts.

But apart from being a cheap shot and the kind of accusatory tactic that a whinging on-campus liberal might throw at you to shut down a debate; this is simply not true.

The following is from an internal, 25-page EU text called an Information Environment Assessment (IEA) – which was circulated among EU diplomats on 20 April and leaked to the Politico news website and, later, EUobserver.

“Reports indicate that China has continued to run a global disinformation campaign to deflect blame for the outbreak of the pandemic and improve its international image. Both overt and covert tactics have been observed.”

In fact, as the EUobserver has noted, The New York Times obtained copies of internal EU emails saying Chinese pressure had diluted the public version of the EU text.

Then there is this:
“The Chinese are already threatening with reactions if the [IEA] report comes out,” Lutz Güllner, an EU official, said in one email the day after the Politico leak.

“The EU was “self-censoring to appease the Chinese Communist Party,” Monika Richter, an EU diplomat, said in another email.

All guilty of informing a racist narrative we assume-well, according to the logic of the Chinese Ambassador anyway.

But what is really galling is to read the Ambassador decry the emergence of “racial, religious or political discrimination, stigmatization and persecution.”

This from the Ambassador of a country that has systematically locked up over a million Uighurs and other members of predominantly Muslim minorities.

According to Amy McKinnon at Foreign Policy, a leading authority on this issue, China has had the unfortunate Uighurs detained arbitrarily in “a vast network of camps in China’s western Xinjiang region, part of Beijing’s so-called reeducation campaign.” This has been described as “a cultural genocide.”

“Those living outside of the camps are subject to round-the-clock surveillance enabled by a vast network of facial recognition cameras, cell-phone monitoring apps, and police checkpoints, while hundreds of thousands of others have been dispatched to forced labour elsewhere in China.”

Despite these facts, the Ambassador has the nerve to speak of how “to overcome the pandemic, the world needs not only science, but also conscience.”

Tell that to the Uighur rights activists, as well as their relatives who now say that “cramped, unhygienic conditions in the camps allow for the untrammelled spread of coronavirus.”

At the end of the article the Chinese Ambassador takes a not very well concealed dig at President Trump:

“Blame game is a wrong remedy to Covid-19, and is as harmful as recommending that people shall inject disinfectant into their lungs.”

Except of course that this is what President Trump said. The full transcript and the context of those ‘disinfectant’ remarks can be found here.

But of course, even if President Trump had suggested this, it would still pale into insignificance beside the Chinese states record of forcibly extracting the organs, lungs included of tens of thousands of members of the Falun Gong; a practice that is still taking place to this very day according to

“My understanding is that China is still performing a large number of transplants – far more than any official figures would indicate – and that vast [quantities of] organs are sourced from prisoners of conscience. A lot of those prisoners are Falun Gong practitioners, who are still incarcerated in large numbers; but based on evidence that some women gave who have been incarcerated in the Uyghur prisons fairly recently, almost certainly people from the Uyghur community are being harvested as well.”

So, spare us the moralising Ambassador-no one with an ounce of sense believes a word that you or your wretched government is saying on Covid 19, or anything else health or human rights related for that matter.