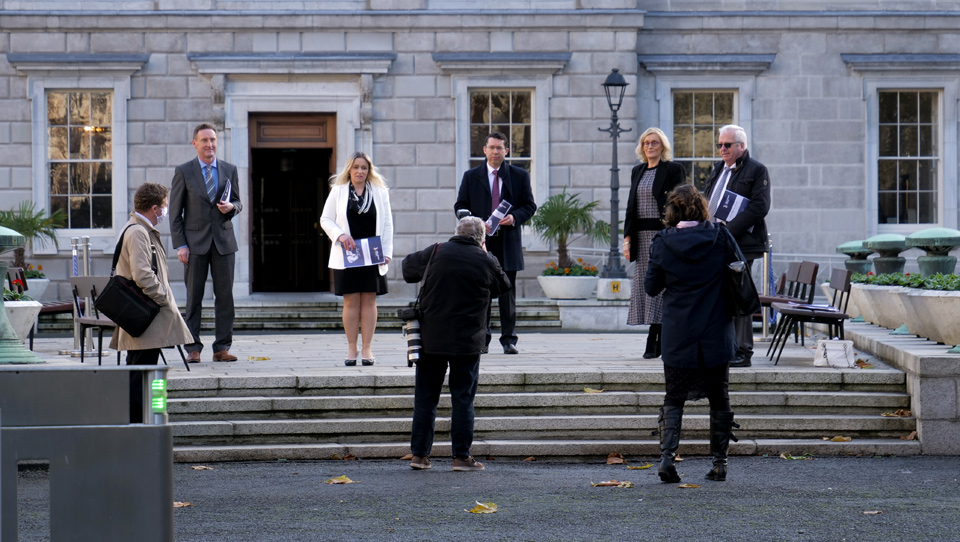 Health Minister, Stephen Donnelly, failed to show up in the Dáil yesterday to answer questions from TDs who said that he needed to take urgent action on what they described as “shocking” and “barbaric” revelations about the practice of late-term abortion in Ireland.

Nine TDs supported or spoke on the topical issues debate on late-term abortion in Irish maternity hospitals, which has come to the fore following the publication of research from UCC in the British Journal of Obstetrics and Gynaecology which gathered the experiences of doctors performing abortions in Ireland.

The paper confirmed that unborn babies were being aborted using the feticide procedure, where the baby receives a lethal injection of potassium chloride into the heart. Doctors in the UCC paper said it was “brutal”, “awful” and one said it was like “stabbing the baby in the heart”.  Another doctor is quoted as saying  “I remember getting sick out in the corridors afterwards because I thought it (feticide) was such an awful procedure and so dreadful”.

Opening yesterday’s debate, Mattie McGrath, Independent TD for Tipperary said that the reaction of doctors who are carrying out late-term abortions made for “grim reading”. He said what was revealed in the UCC paper was shocking, unspeakable and must end. He added that Simon Harris dismissed concerns from TDs on this issue in 2018.

Carol Nolan Independent TD for Laois Offaly said TDs were assured that babies would never be born alive after abortion and left without care but that it was now happening. “What are you going to do about this?” she asked the government, adding that it was shameful that the Health Minister was not here to take questions. “We will not allow this to be swept under the carpet, It’s barbaric and shameful.” she said.

Galway Deputy, Seán Canney, said that the report was an independent one, not produced by any group, and made for horrific reading. Urging the Minister to read and respond to the research he said: “We really need to look at this Minister and make sure our children are treated with dignity”.

Peadar Tóibín of Aontú said “An unborn child is a living, distinct human being, as human as you or I and yet under your government currently late term abortions are being carried out.” He said pain relief was not being used in late-term abortions and asked the Minister for Health on the “level of any humanitarian understanding of society, how can you stand by this?” He said that the Minister had refused to ensure pain relief for babies in late-term abortion only last week.

Independent TD Michael Collins said that people voted for repeal but they did not realise what would follow, including 6,666 abortions that took place in the first year. He said reading the doctors’ descriptions of late-term abortion highlighted that the procedure was a “terrible wrong”.

Minister of State for Health, Frank Feighan, then spoke from a scripted answer and said Minister Donnelly was “aware” of the BJOG paper.

Mattie McGrath said that it was shocking that the Minister had not come in to answer questions. He called for a ban on late-term abortion and an amendment to the abortion legislation.

Carol Nolan said that the Minister for State had not answered any of the questions by TDs and that he had given a purely scripted response. She said animals were treated better under the law than babies in late-term abortion. “This issue is not going to go away,” she said.

Michael Collins said that if Minister Donnelly was aware of the UCC paper, then his response to the Dáil was very disappointing and that babies needed to be protected. Seán Canney said that the response given in the Dáil dodged the question. “I would ask the Minister to look at the report … the answer given here is disappointing,” he said.

Peadar Tóibín said “I know that you’re reading a script at the moment, but you have an individual responsibility over what you say in this chamber and over what is actually happening  – the hundreds of words you spoke about add up to nothing, they mean mean business as usual, and it means that a boy or a girl who survives and abortion and who is a citizen of this country is allowed to expire potentially with no palliative care whatsoever and no effort to protect their lives.  And Minister for you to come in and give this complete non-answer to such a shocking humanitarian situation in this country  is absolutely so hard to listen to.”

Minister for State Frank Feighan then said that he would ask the Minister for Health, Stephen Donnelly,  to give a written response to the questions that had been raised in the coming days.

Pro-life groups said that the issue could not be swept under the carpet.  “Bravo to all the superb pro-life TDs for speaking so powerfully and articulately and with great compassion, and for ensuring tonight’s debate on late-term abortion in the Dáil,” the Life Institute said. “This cannot be covered-up, people need to know that the Repeal campaign, politicians, and the media lied when they said this would never happen.”