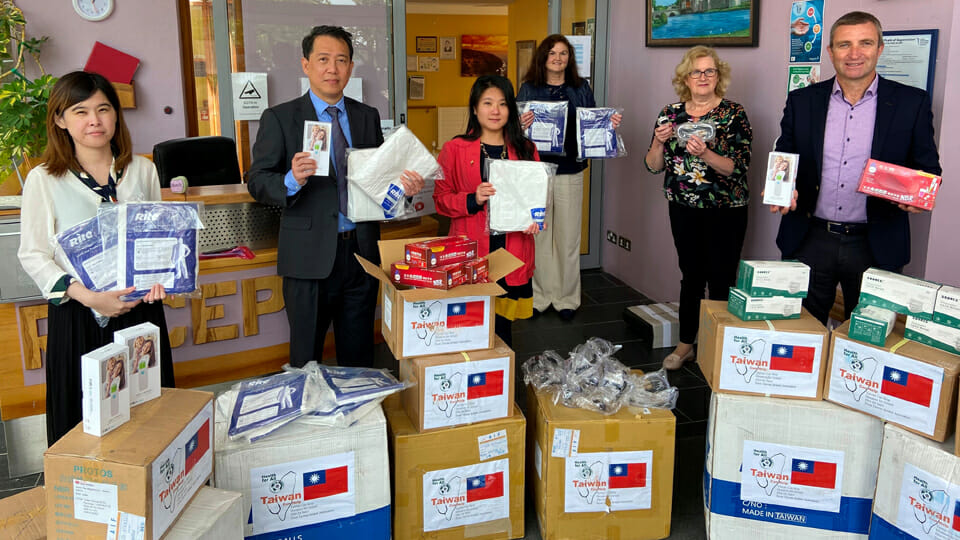 The Taiwanese community in Ireland yesterday continued their campaign of donations to long-term care facilities in Ireland with the donation of a shipment of PPE to Cheshire Limerick. The donation consisted of 350 medical masks, 5,000 pairs of medical gloves, 200 pairs of googles, 200 pieces of protective clothing, and 10 infrared thermometers.

Since March the Taiwanese community in Ireland has donated nearly 20,000 pieces of PPE to long-term care facilities in this country.

Cheshire Ireland, of which Cheshire Limerick is a part, has been in Ireland for over 50 years providing support services to those with complex physical and neurological disabilities and other long-term health issues. They run 21 centers across the country.

There was a small ceremony to mark the donation, with Margaret Molyneaux, director of Cheshire Limerick; Angel Cheng, chairman of the Taiwan Ireland Association; Pierre Yang, Taiwan’s Representative to Ireland; and Deputy Niall Collins of Fianna Fail attending.

Speaking of his joy at being able to help Irish nursing homes Representative Yang quoted a poem from Rebecca Elliot, a 23-year-old nurse:

I worry about lives /

Yet some worry about pubs /

Or will they stay

I fight on the frontline /

He also spoke of his hope that in the future Taiwan would be admitted to the World Health Organization [WHO], an organisation which refuses to acknowledge the existence of Taiwan for fear of upsetting the Chinese Communist Party [CCP]. His statements on the WHO echo those recently made on Gript by Dr Chen Shih-chung, the Minister for Health of Taiwan.

Ireland does not currently formally recognize Taiwan as a country and the Speaker of the Dail has previously written to TDs telling them not to visit Taiwan for fear of offending “our Chinese friends.” Maurice Manning, the former head of the Irish Human Rights Commission, earlier this year said that Ireland “adopts the harshest anti-Taiwan policy of any EU country, for fear of causing the slightest annoyance to China.”