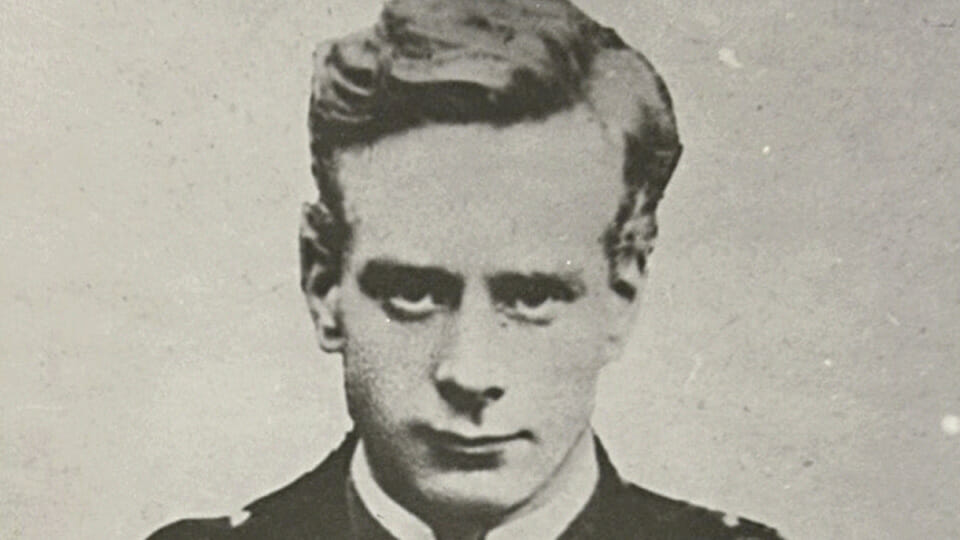 On 7th December, the National Graves Association unveiled a statue in Finglas commemorating Liam Mellows who was executed on December 8, 1922 by Free State forces.

Mellows was born in Lancashire into a British army family. When his father was transferred to Dublin he spent some years with his mother’s family in Wexford. He joined the Irish Republican Brotherhood in Dublin and was an organiser for Na Fianna Éireann. He was commander of the republican forces in Galway during the Rising but evaded capture here by escaping to America. He was imprisoned for a time in New York as a German collaborator and when released helped to organise De Valera’s tour in 1919 and 1920. He returned to Ireland and was appointed as Director of Supplies on IRA General Headquarters Staff.

He was elected to the Dáil in the 1918 election.

He opposed the Treaty and was arrested after the defeat of the Four Courts garrison and was imprisoned in Mountjoy. Following the IRA killing of pro-treaty TD Seán Hales on December 7, 1922 Mellows along with Joe McKelvey, Rory O’Connor, and Dick Barrett were executed as a
reprisal the following day.

Mellows wrote a number of letters to the IRA outside while held as a prisoner. Some of them were published by the Communist Party newspaper Workers Republic. In his communiques Mellows attributes the failure of the anti Treaty side to win mass support to the fact that the
revolutionary Dáil had not paid sufficient attention to the Democratic Programme and to the pursuit of the cultural and intellectual objectives of the revolution.

Although grateful for the opportunity to use any means to reach an audience, however small, through the communist press, he assured Austin Stack that it did not mean that he had embraced the CPI programme. Indeed the Communists, as they have always been up to the present, were duplicitous in their dealings with the republicans.

Their primary aim facilitated by Peadar O’Donnell, was to suborn Volunteers and when JT Murphy and Arthur McManus of the British Communist Party on behalf of the Comintern met IRA leaders in August 1922 it was to urge that they call a ceasefire and form an alliance with the tiny CPI. That was rejected and Comintern was in any event more anxious to come to an accommodation with the imperialist powers when it had become clear that they faced international isolation and economic ruin.

Mellows ‘Mountjoy Notes’ continue to be cited along with the Republican Congress and make- believe Soviets as part of the mythology of the far left which has infected republicanism over the years and informed strategic errors and compromises that have ended in betrayal and incorporation in the system they purport to oppose.

Mellows was an Irish nationalist who fundamentally believed in the political, economic, cultural and intellectual sovereignty and autonomy of the Irish people, embracing its different strands. That connection between the objectives of the movement to overthrow British rule and the
betterment of the social condition of the Irish people never required the tutelage of deracinated Marxists.

The ongoing attempts, therefore, to place Mellows into some putative international socialist project is not only ahistorical but evinces what Ruairi Ó Bradaigh once described with regard to the intellectual surrender of Cathal Goulding and others to the British communist Party, as an “intellectual inferiority complex.”

The current unthinking embrace by erstwhile republicans of the entire agenda of liberalism in all its connotations, including the undermining of national protections against neo-liberal economics, underlines the need for a retaking of Mellows and the Irish revolution back into the ownership of those who oppose all of the above.

Is Ageing a Disease?