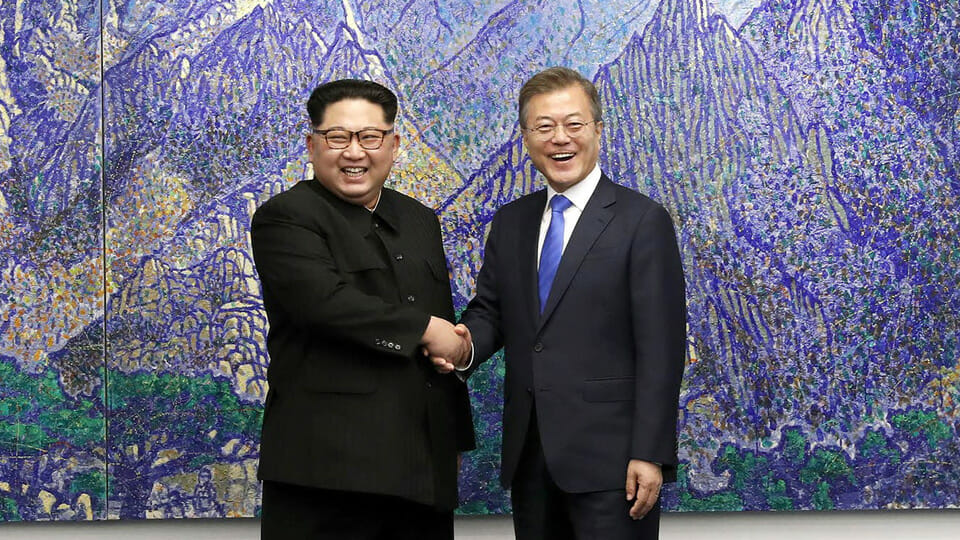 “To defend Korea, Moon must go,” Gordon Chang told the 900-strong crowd packing the  in the Grand Hyatt Hotel in Seoul for a conference entitled Preserving South Korea’s Freedom. The room erupted into sustained applause.

Mr Chang, a lawyer, author and broadcaster, believes that the President of the Republic of South Korea, Moon Jae-in, is pushing for reunification with North Korea at any cost, despite the authoritarian and repressive nature of the Kim Jong-un regime. Along with many of the other speakers at the October 3rd conference organised by the Korean Conservative Political Action Committee (KCPAC) and the New Institute, he is deeply concerned that South Korea is sleep-walking into reunification with the draconian North, and troubled at what that might mean for democracy in Asia. 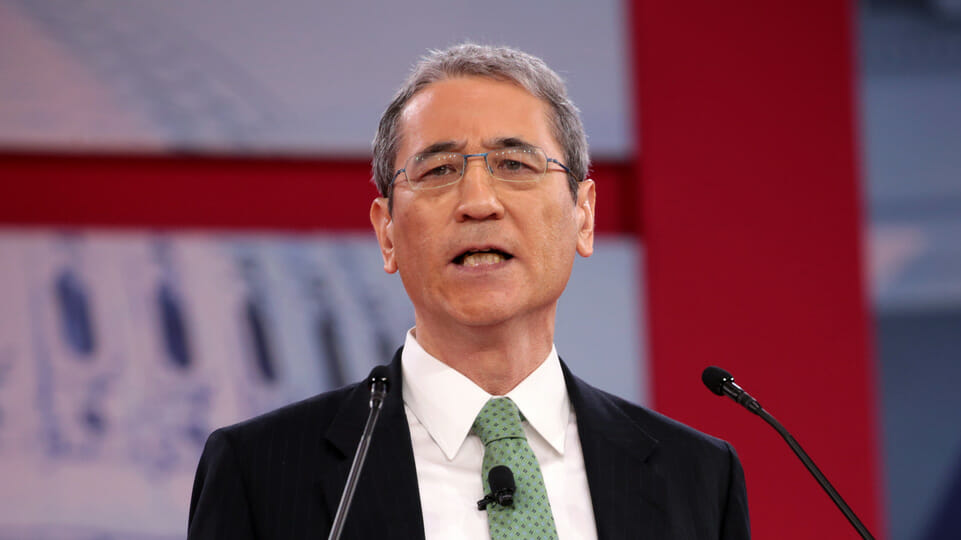 “We need to talk about the possibility that the free world could lose South Korea. For most people it’s just ludicrous to think that destitute North Korea can take over South Korea – a larger and a stronger state – but that’s the possibility. It’s a possibility because the South Korean President Moon Jae-in is a progressive, and his overarching goal is to unify the two Koreas, and unfortunately he’s contemplating doing that on the terms of North Korea. Moon is trying to undermine democracy in his own society,” he has observed.

Mr Moon has pledged to unify North and South Korea by 2045, and stands accused of seeking to undermine freedom of the press and free speech in his own country as part of efforts to seek rapprochement with Mr Kim.

Defectors from North Korea, who had previously found a ready platform in the Republic to share their experiences and shed a light on what life was like in a communist country, now say they find opportunities to speak becoming increasingly scarce especially on state-linked broadcasters. History is also being rewritten in schoolbooks to understate the aggression of North Korea’s actions in the Korean War, says Dr Tara O of the Institute for Corean-American Studies.

According to the Financial Times, human rights groups also complain that the long-established practise of sending information into North Korea through leaflet distribution, data devices and loudspeaker broadcasting has now been described as a “hostile act” by the Moon administration, and You Tubers who are opposed to Moon’s policies are being targeted. 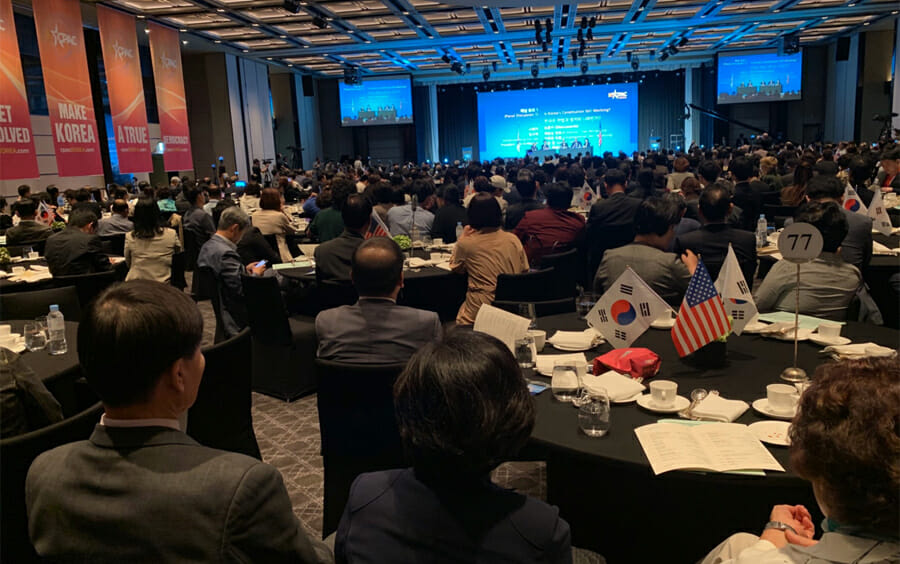 Delegates at the KCPAC Conference in Seoul

Dr O says that South Korea has taken a step backwards in terms of journalistic freedom since Mr Moon’s election as President. “The Moon administration has already targeted major media broadcasters. Early in his presidency, Moon Jae-in used labor unions and the government apparatus to forcibly replace the heads of MBC and KBS, 2 of the major TV and radio broadcasters, in South Korea. Now the Moon administration is targeting small, independent media to further silence those it does not like,” she wrote, after Byun Hee-jae, founder of a small independent media outlet Media Watch, was preemptively jailed for libel, a practise unheard of in free countries.

Critics further point to North Korea’s resumption of ballistic missiles tests and the regime’s recent mocking of Moon’s efforts to mediate in disputes with the US. Some worry that South Korea is engaging in the sort of appeasement strategy which, they say, historically has ended badly when democracies engage with despots.

Mr Chang believes that the Moon administration is driven by left-leaning, progressive ideologies, and this worldview would demolish the freedoms enjoyed by the Republic of South Korea on the basis of establishing a unified country.

“Moon is the enemy of South Korea, he wants to end its existence, to be the last president of the Republic while accepting unification terms of the other side,” Mr Chang says. He claims that a democratic state cannot be merged with totalitarian regime, and that Mr Moon is undermining democratic institutions because the reality is that reunification might only be feasible if South Korea was more authoritarian.

He pointed to a failed effort by the Moon administration to remove a clause guaranteeing freedom from the South Korean constitution, leaving only a reference to democracy.  Since the totalitarian north of the peninsula is named the Democratic People’s Republic of Korea, despite its curtailment of human rights and denial of basic freedoms, it is essential to protect freedom as well as democracy, he claims.

South Korea has long been America’s ally in Asia. The two countries have a close and long-standing alliance ever since the bloody conflict of the Korean War in which 3 million Koreans died, and almost 58,000 US soldiers lost their lives. Since that time, North Korea became a repressive communist regime led by the Kim dynasty, while South Korea became not just a democracy but an economic powerhouse which today ranks as the world’s 11th largest economy in terms of GDP.

The contrast between the two countries is stark: according to the CIA Factbook South Korea’s GDP per capita in 2015 was estimated at $37,600, while the estimate for North Korea’s was just a fraction of that at $1,700. 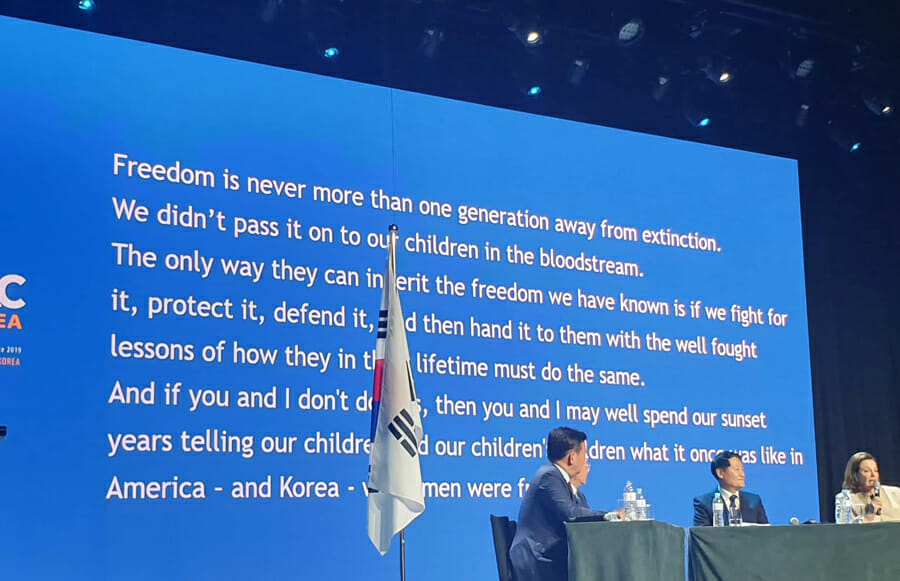 Speakers at the KCPAC Conference in Seoul

But the contrast in terms of freedom and human rights is even more striking. Human Rights Watch, describes North Korea as “one of the world’s most repressive states” and confirms that Kim Jong-un “continues to exercise almost total political control.” Arbitrary arrest and punishment of crimes, torture in custody, and executions to maintain fear and control over the population, is a feature of the regime.

“The government restricts all civil and political liberties, including freedom of expression, assembly, association, and religion. It also prohibits all organized political opposition, independent media, civil society, and trade unions,” their report says.

David Maxwell, a retired US Army Special Forces Colonel with extensive experience and knowledge of the country, told an earlier Korea panel at CPAC 2019 that South Korea needed to show strength when dealing the Kim dynasty. “The Kim family regime will never attack strength,” he said. “It  is very important that we demonstrate strength.” He added that the US troops in South Korea and the country’s alliance with America were a deterrent to the North’s aggression.

Col Maxwell said that the freedom represented by South Korea should urge international co-operation and support for conservatives. “We’ve got to work together whether you’re Korean or American or any conservative around the world  – our shared values in Korea and the United States are freedom, individual liberty,  liberal democracy, free-market economy and human rights,” he said.

Other speakers at the Seoul conference also warned against South Korea’s drift away from freedom and liberty, and pledged US support for conservatives. Matt Schlapp,  chairman of the US Conservative Union described the KCPAC as “conservatives in Korea coming together for Korea” and noted that conservatives from all over the globe were working together for freedom. Businesswoman Annie Chan who was born in Korea and chaired the Seoul conference urged the US to stand with Korea against any loss of freedom.

Interestingly, and as reflected in the attendance at KCPAC, polls show young people in South Korea are much less supportive of unification than older or middle-aged progressives. And Mr Moon has other pressing issues driving down his popularity in the polls, with widespread anger at corruption bringing 3 million people out to protest in Seoul this month according to The Korea Herald.

Protesting their Justice Minister and President.

Gordon Chang urged conservatives at the KCPAC conference to take political action. “The advocates of freedom are squabbling amongst themselves,” he warned. “Stop squabbling: fight Moon Jae-In instead. To defend Korea, get rid of Moon.”

The upcoming elections for the National Assembly, scheduled for April 15th, 2020, is “do or die, now or never” challenge,  he told them. “Fight for your freedom! The US stands with you. Because we stand as one, freedom will never die.” 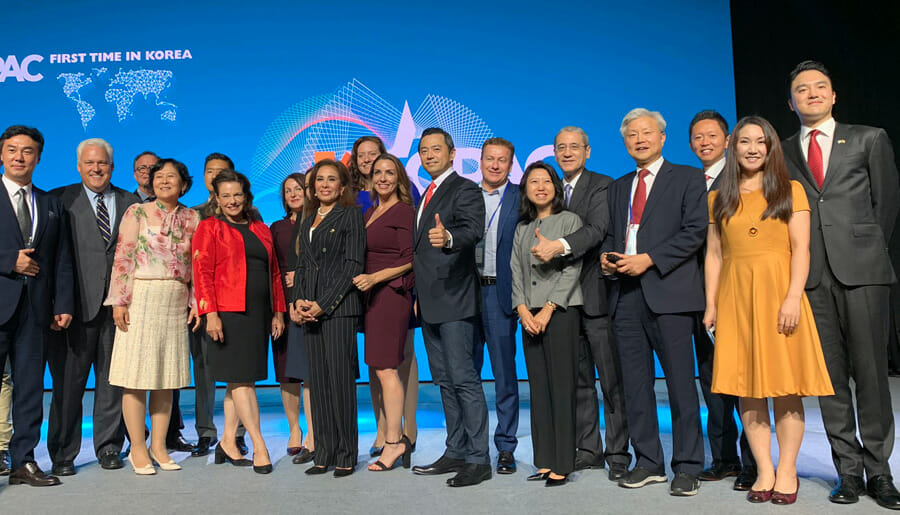 Delegates at the KCPAC Conference in Seoul

The Texas power crisis — will it happen again?

New Experimental Poll: Trump might be winning, you know