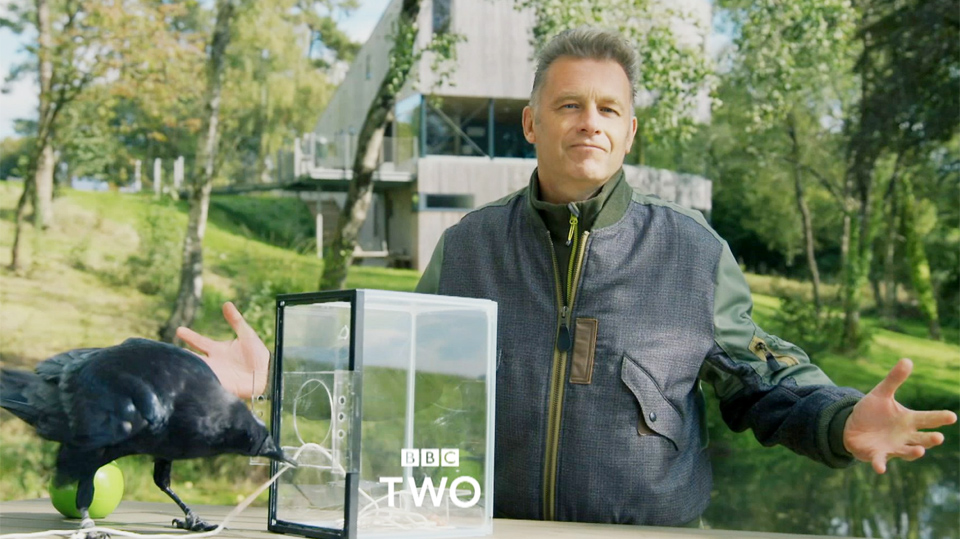 Are humans as smart as crows? Once the BBC poses a question like that, you already know the answer.

In a new series, Chris Packham’s Animal Einsteins, the naturalist investigates “how nature’s masterminds measure up against human brainpower”.

However, Telegraph reviewer Anita Singh notes that the first episode “had an air of being cobbled together” with old footage of animals doing amusing tricks.

One experiment involved a New Caledonian crow, a species which has acquired a reputation for tool-making amongst biologists. In the wild, it removes grubs and bugs from logs with twigs.

Packham set up an experiment in which the bird had to access a treat from a perspex box through a series of manoeuvres. It needed to “push a ball out of the way, withdraw three sticks barring the door, reach inside and pull out the string attached to the food”.

Unfortunately, a bit of backstage abracadabra was involved to ensure that this actually happened. Mr Packham admitted in an earlier interview that it had been “the second take and the bird had already performed the trick once”. “Never work with children or animals,” said W.C. Fields. Wise advice, which Mr Packham seems to have taken to heart, although modifying it to “never screen your first take with children or animals.” Ms Singh commented drily that this is “hardly a scandal in the annals of great BBC fakery, but these little details do count”.

Ms Singh observed that “the inference was that these were new discoveries when in fact they were several years old”. With images of chimpanzees memorising numbers on a touch screen and bees being tutored to count and to play football, the programme was good kiddie fare.

And also a splendid exercise in teaching evolutionary theory to children. In fact the New Calendonian crow has been used as a model species for scientists investigating the influence of tool manufacture and use on the evolution of intelligence.

Inevitably on the BBC, the findings of such experiments are almost seamlessly applied to humans.

Back to Mr Packham. After proving that the crow was an avian Einstein, he asked a five-year-old boy to remove a lolly from a tube with a long piece of wire.

Apparently, only five per cent of five-year-olds twig to the fact that they need to bend the end of the wire into a hook to grab the lolly. New Caledonian crows can do this at the age of two. And yet crows grow up a lot quicker than humans; the American crow lives 7 or 8 years; the common raven lives 10 to 15 years; and the Australian raven soldiers on to the grand old age of 22.

By dint of judicious omissions of this sort, Mr Packham argues that animal brainpower is superior to the human sort.

Although his wildlife programmes undoubtedly appeal to children, in 2017 he said that he would not have any of them “in order to spare the Planet”, and would “encourage women everywhere to follow suit”.

Before the Covid pandemic hit, Mr Packham opined that epidemics used to keep human numbers under control and that world population was “rising too fast and damaging the environment”. He even suggested in a Radio Times interview that “measles, mumps, malaria and smallpox are there to regulate the world’s population”. Far from sacking him, the BBC gave him a prime-time TV slot to present “7.7 Billion People and Counting” in order to further his Malthusian message.

Chris Packham’s interest in children seems confined to indoctrinating other people’s children with the belief that they are a drag on the Planet and that they are dumber than some animals. His latest series looks very much like a free advertisement for this anti-human message, courtesy of the publicly-funded BBC — although one would think that those paid from the public purse would not be keen to reduce the number of the public.

Even more sinister, the message conveyed is that some humans are less valuable than animals, which has been boldly proclaimed by more than one Darwinian thinker. Animal rights theorist Professor Peter Singer has notoriously maintained that some animals are more deserving of rights than mentally disabled humans.

Not every human being is an Einstein, to be sure, but in our Judeo-Christian tradition, each one is infinitely valuable merely by virtue of being human; each one is a reflection of the Divine Creator. And for those who do not share this view, please note that Darwinian theory has been used to justify genocide, most notoriously in the Nazi eugenics program and the Holocaust.

One does not need to be an Einstein to realise that we may have to wait a few zillion years before the New Caledonian crow improves on the theory of relativity. When we see a crow building a house, a church, a leisure centre, or indeed anything not linked to its bare survival as a crow (and not out of sticks), I admit that the BBC would be justified in making a whole series about it. Maybe two of them.

It really would be something to crow about.