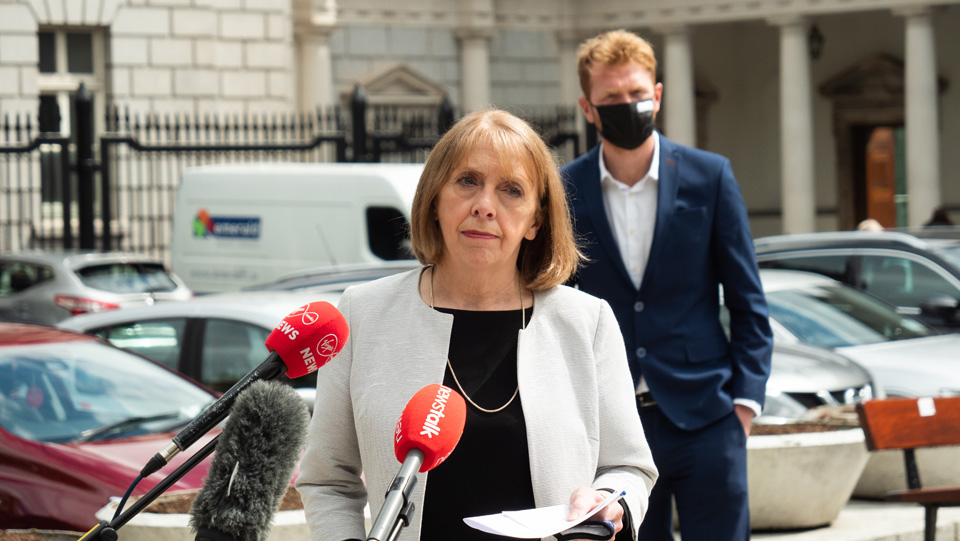 Unbelievable. And yet, entirely in character:

Soc Dems ⁦@RoisinShortall⁩ says she has “serious concerns” about Govt’s proposed extension of emergency Covid powers and says extension should only be six weeks. pic.twitter.com/jZzsbYepg5

As of today, the Social Democrats will vote against any extension of the lockdown powers. On one level, obviously, this is welcome news for businesses who have been shuttered for over a year. On another level, though, it is one of the most shameless flip-flops in recent Irish political history. Here is this same party, just three months ago:

The Social Democrats have called on the Government to set a target of 10 Covid-19 cases per day in order to avoid a fourth lockdown.

Co-leader Róisín Shortall said such a low target would give the country a fighting chance of returning to normality.

The party has been advocating a “Zero Covid” strategy to tackle the disease along with mandatory hotel quarantine for all international arrivals.

There is nothing wrong, of course, with changing your mind. But what has driven the shift in Social Democrat policy? We do not know, of course, because nobody in our timorous media class would ever dream of asking them such an awkward question. Irish Independent columnist Jason O’Mahony has his own explanation:

The Social Democrats: Never on the unpopular side of an argument.™️ https://t.co/pJC5aCZHxS

Of course, that might be unfair. Perhaps the Social Democrats have conducted a rigorous review of the scientific literature, and come to the conclusion that their prior existence as the pet party of the Independent Scientific Advocacy Group was based on flawed research? Perhaps they have carefully studied the experiences of other countries, who are exiting lockdown hand over fist, and concluded that their strategy is superior?

Alas, we will never know.

It is, of course, very convenient that their policy seems to have shifted 180 degrees, independent of the science, to a position which is gaining in popularity. And, naturally, should lockdown be found, in the longer term, to have negative consequences, the Social Democrats will be out there claiming to have opposed it, based on this press conference. Should things go the other way, and cases and hospitalisations spike, they will also be able to say that they supported Zero Covid.

They have, in other words, covered all bases.

Anyway, what is interesting here about their decision to oppose the extension of the lockdown powers is how far reaching that opposition is, in terms of its potential consequence. The Government possesses the votes to pass the legislation without Soc Dem votes, but imagine for a moment that it did not. If the emergency legislation were to fall, then all restrictions enacted under that legislation would fall too. At the stroke of a vote, the legal restrictions against mass gatherings, the opening of pubs and restaurants, travel restrictions, and all the rest of it, would fall.

In other words, the Soc Dems, by voting against the extension, are voting for an immediate end to all lockdown restrictions.

Do we think, in our hearts, that this is what they really want to see happening? Probably not, would be my guess, especially since they seem to have landed on a position of extending those powers for only six weeks.

In other words, if the Soc Dems vote against the extension, on the basis that they have concerns, they are voting in favour of a full re-opening, with no restrictions at all. Which is, it is fair to say, a fair step removed from their zero covid policy, which was still in place as recently as a month ago.