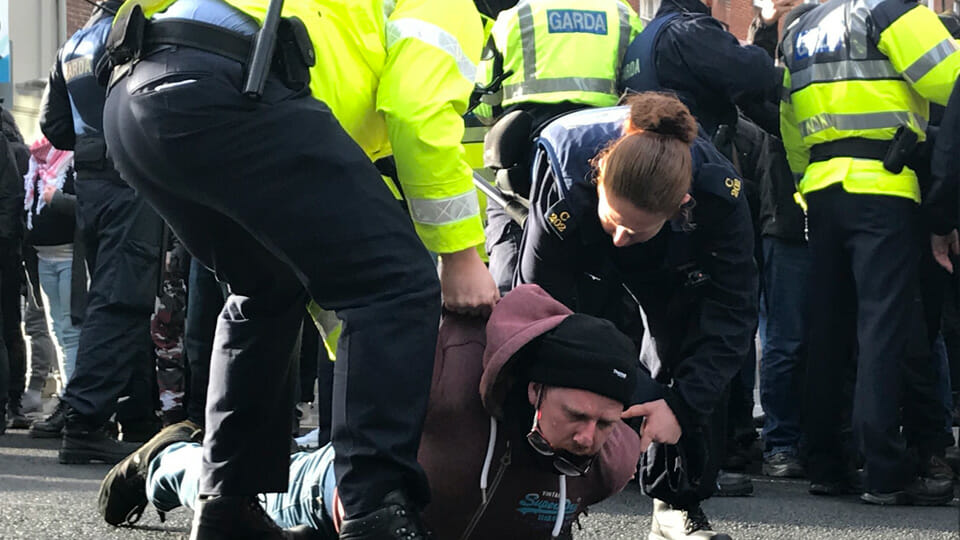 Left-wing extremists, including masked members of Antifa, threw a smoke bomb during an attempted attack on a free-speech rally outside the Dáil, Saturday afternoon.

At least one Antifa activist appears to have been arrested after a Garda was assaulted with a metal tripod leg during a attempted charge by left-wing extremists at the demonstration against proposed free-speech legislation. In total three male left-wing demonstrators were arrested.

Footage online shows Antifa and supporters, dressed in black with their faces masked, shouting chants before attempting to charge at the rally. Gardai drew batons to hold back the Antifa protestors who repeatedly attempted to attack the free speech rally.

WATCH as #antifa man attacks member of the public, breaks victim's tripod/camera and whacks a guard across the face, knocking them down with the stolen tripod leg.

Tracey O’Mahony, a barrister who had called the free speech rally, said its purpose was to highlight the danger to free speech and free expression in the Government’s proposal to amend ‘hate-speech’ legislation.

She said it could become a crime to express validly held opinions and questioned who would determine what ‘hate-speech’ was.

Supporters of the proposal say that hate-speech has become a problem in particular on online platforms and that reform is needed.

Ms O’Mahony said the counter protesters came to the Dáil with a clear intent of violence. “It is hard to accept this is happening in Ireland but the alternative to holding such events is silence and this is not an option,” she said.

Members of Yellow Vest Ireland and the Irish Freedom Party were in attendance at the rally supporting free speech. 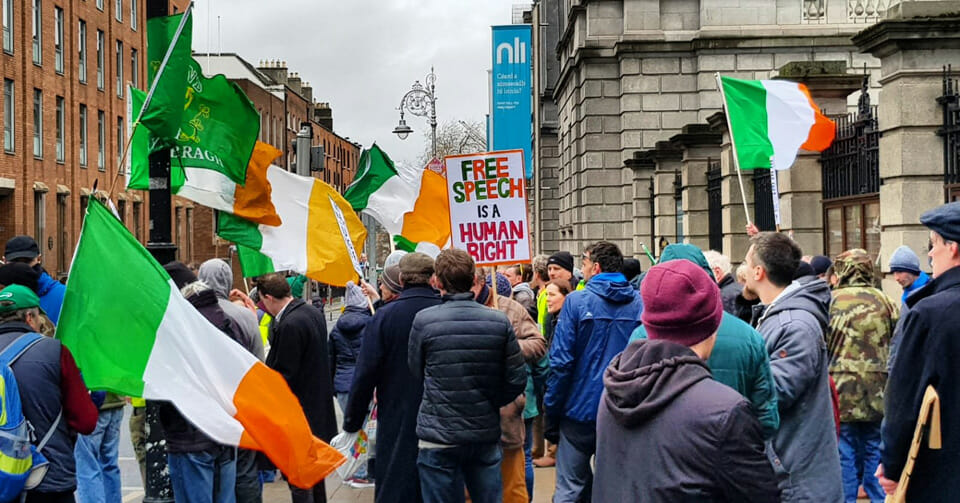 At one point during an attempted charge, left-wing activists threw a smoke bomb at the free-speech rally.

The left-wing protesters, who are also believed to have included members of the Workers Solidarity movement and some republican extremists, chanted ‘nazi scum, off our streets’ at the free speech protest.

Ms O’Mahony rejected the charge, saying “It has become quite prevalent in today’s society to label anyone with whom you disagree a Nazi, a racist or a fascist. To suggest that a person who advocates for freedom, including freedom of expression, is a Nazi, seriously undermines the significant and horrific treatment exacted by the Nazis during WWII. The comparison is ill conceived and untrue.”

A group of up to 20 Antifa men followed those attending the free-speech rally as they dispersed, but were held back by riot police as they attempted.

Cathal McCarthy, who travelled from Limerick to support the free speech rally, told Gript News: “We have a bunch of thugs wearing masks, roaming around the city looking to beat people up – and they are the same people accusing law-abiding citizens of being Nazis. It’s easy to see who the real Nazis are, and its no wonder they want to stamp out free speech when they are happy to physically attack anyone who disagrees with them.”

A previous left-wing protest opposing a free speech rally in December was attended by prominent members of Saoradh,  a far-left group that police say is the political wing of the New IRA.