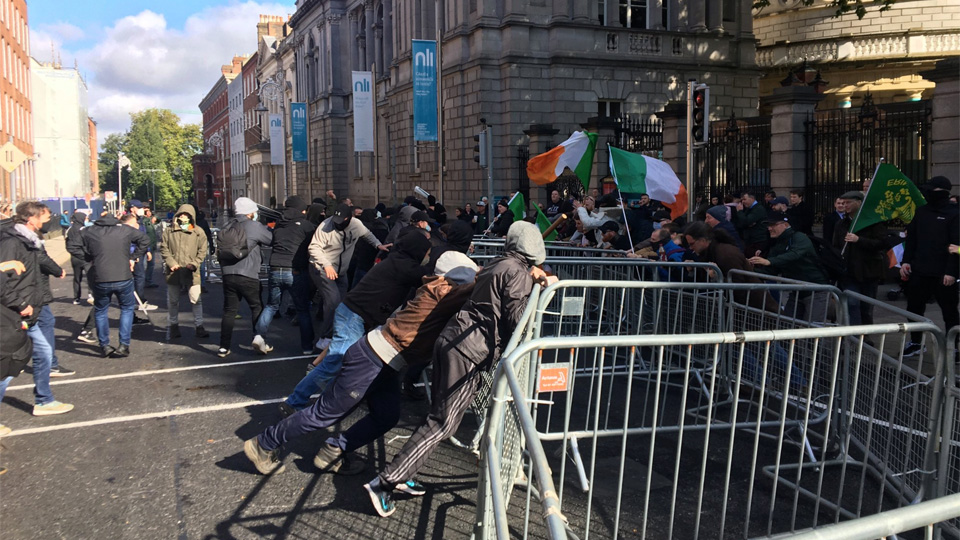 The militant far-left group Saoradh, who were investigated in relation to the murder of journalist Lyra McKee, joined with masked and hooded men at the weekend to instigate violence against an anti-lockdown protest in Dublin.

Police say that Saoradh is the political wing of the New IRA, who took responsibility for the killing of Ms McKee in 2019. Anti-terrorism police have searched Saoradh’s offices in four locations following the murder.

Members of Saoradh are understood to have travelled to Dublin to boost Antifa numbers last weekend at a counter-protest to an event organised by the National Party at the Dáil.

Videos circulating on social media show dozens of men dressed in black, hooded and wearing masks, rushing the barricades the gardai had placed around the anti-lockdown protest. Missiles were thrown, and at least two people were injured, before gardai – described as “Drew Harris’s henchmen” by Saoradh – intervened.

Gardai drew batons to push back the Saoradh/Antifa crowd, and formed a line between the two groups who then chanted insults at each other.

One onlooker told Gript Media that Saoradh/Antifa had set up groups “checkpoints” on streets approaching the Dáil to intimidate people seeking to attend the anti-lockdown protest, and to deter journalists. “They were acting like a militia,” he said, “Telling journalists they weren’t allowed to film or photograph, intimidating people in the middle of the city centre even though there was probably a hundred gardai in the vicinity of the Daíl.”

The Irish Times reported that “At several points, members of the group of counter-protesters, with their entire faces covered, approached members of the media and demanded to see credentials and identification.”

Reporter Colin Gleeson said that reporters were threatened and that the gardai had to intervene on “at least two occasions” to stop the masked counter-protesters turning violent as they demanded that journalists stop videoing and recording.

“As Justin Barrett, the leader of the National Party, spoke through a megaphone at Leinster House, the counter-protesters formed a line along Molesworth St and refused to allow members of the public or the media to pass as the gardaí looked on,” he reported.

On social media, some observers noted that while media reporting had previously focused on describing anti-lockdown protests as ‘far-right’, the far-left were now intimidating journalists.

Others pointed out that “Some of these anti fascist protesters don’t seem to realise threatening the media is fairly fascist behaviour”.

Excellent print and video reporting from @endajodowd and @ColinGleesonIT from what sounds like a hairy situation. Some of these anti fascist protesters don't seem to realise threatening the media is fairly fascist behaviour https://t.co/x3C7uiKRnp

Listen: Gary Kavanagh discusses the violence – and Antifa/Saoradh’s attempt to police Dublin city centre – on The Right Side PODCAST on Gript.