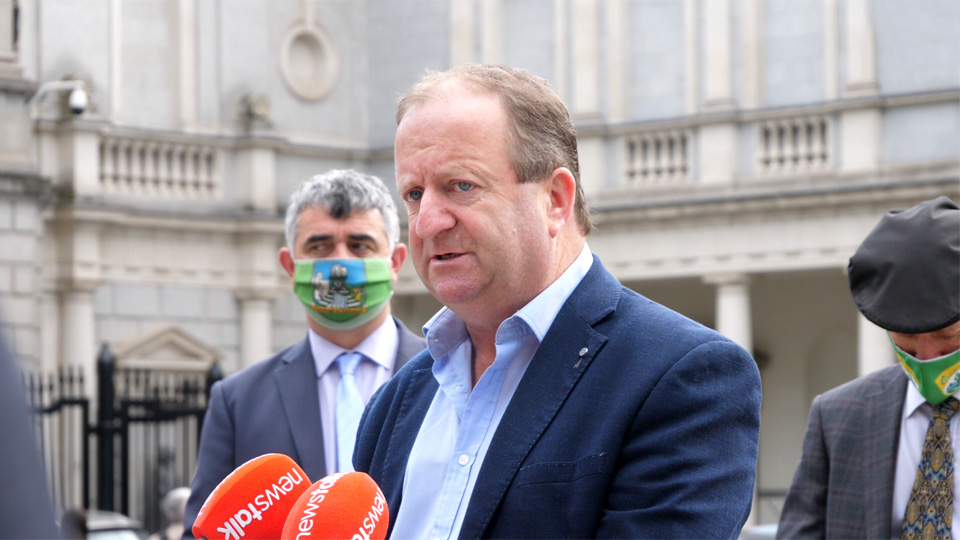 Rural TDs have urged politicians to give cross-party support to their motion which seeks to revoke the latest Covid-19 restrictions passed by the government which they say are “bizzare, illogical, and unworkable.”

The Independent TDs were sharply critical of the actions of other deputies who they said voted for the Government’s restrictions in the Dáil and then went back to their constituencies to speak against the same restrictions.

“[T]he most horrible thing we saw was where people who supported the Government, voted for the Bill and spoke in favour of it and then went home and kept saying on their local radio stations that it was a step too far and the Government was out of line. For God’s sake, they are the people who voted for it,” Michael Healy-Rae TD told the Dáil during the debate on the motion.

Asking for the restrictions to be “annulled”, Mattie McGrath TD said he wanted to “call on Members of Sinn Féin and the Labour Party, who said this legislation was daft, bonkers and railed against it all weekend, as did Members from the Minister’s own party including Deputy MacSharry, to .. pony up, not go out and tell their constituents one thing and then come in here and vote differently.

Cork South West TD, Michael Collins said that last week “110 Deputies in this Dáil fell over themselves to vote in favour of the Criminal Justice (Enforcement Powers) (Covid-19) Bill 2020, giving further powers to the Minister for Health, Deputy Stephen Donnelly, and others. The Deputies, from Sinn Féin, Fine Gael, Fianna Fáil, the Labour Party, the Green Party, the Social Democrats and the so-called Independents in the Regional Group, all turned their back on the hard-working people of this country.

Carol Nolan TD for Laois Offaly said that the government continued to “actively persist in clearly wrong-headed policies because they do not have the humility, or perhaps the capacity, to admit a mistake that may yet end up causing job losses and closures in Laois-Offaly and constituencies beyond. Many are now considering if there is a vendetta against pubs, hotels and restaurants. At one time we would have put such remarks down to an excess of imagination but now it is not so easy to dismiss these concerns.”

Richard O’Donoghue, Independent TD for said that the restrictions were putting additional strain on the Gardai who didn’t want to police what people were eating.

Mattie McGrath TD said the rules were “bonkers” and made no sense. “Nine of my family went out for a meal on Monday and we couldn’t sit at the one table. It’s crazy legislation,” he told media outside the Dáil.

“It is patent nonsense. This is absolutely a case of losing focus. It is imposing yet another burden on an industry that is struggling to hold on after operating at reduced or no capacity for a prolonged period of time. Keeping records of what every person who enters their premises has ordered for a period of 28 days will in no way help to fight against Covid-19. Limiting funeral gatherings to six people but allowing 50 at a wedding is utterly nonsensical. It only serves to confuse and frustrate the public who cannot see the logic of it and takes the focus away from the important steps of hand and respiratory hygiene that we had to fight against Covid. The washing of hands, respiratory hygiene and keeping clean has all been lost now,” he told the Dáil.

Michael Healy-Rae said he wanted to “ask the Minister to look at the powers the Government has given itself, realise it has made a mistake, realise it is doing wrong by the people who want to work and allow them to continue. Let us face into the winter with a little bit of hope and optimism and a little bit of thinking outside the box. ”

Fellow Kerry TD, Danny Healy-Rae, said that  “eminent barrister, Constance Cassidy, SC, claimed that the measures put in place last week were “ill-judged, ill-considered, ill-formulated and ill-understood, even by the very Ministers responsible for [their] introduction .”

Minister for Health, Stephen Donnelly, said the Government, “through the regulations, continues to support our community – and I know that everyone in this House feels the same way – and to reinforce solidarity and togetherness by providing appropriate monitoring and enforcement. It is for this reason the Government opposes the motion”.