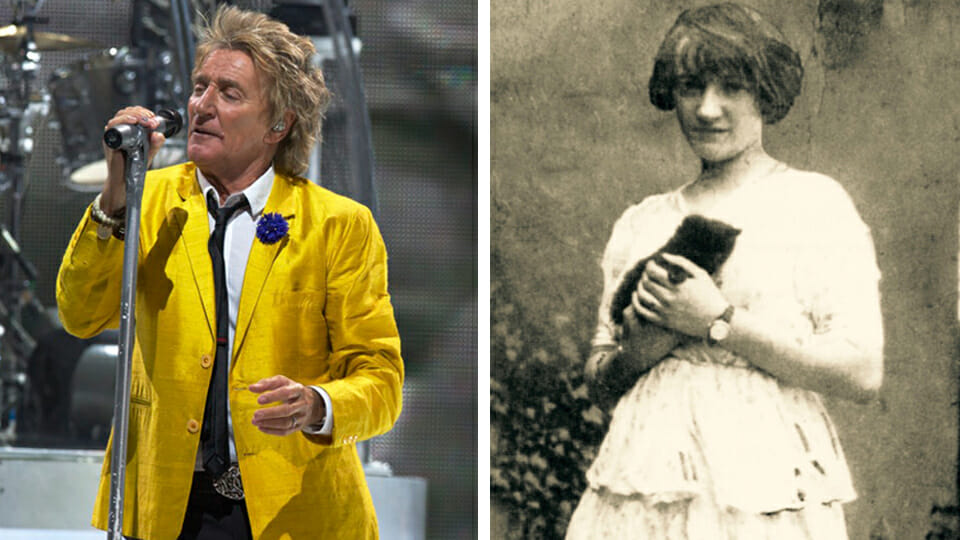 Last week, Facebook went wild over photos of Rod Stewart who was snapped while he placed flowers on the grave of Grace Gifford in Glasnevin Cemetery.  The singer’s championing of the Jim McCann song Grace is a somewhat curious landmark for those who remember when not only was the Section 31 ban in force, but when any hint of artistic or intellectual  “subversion” was self-censored by the Irish media establishment. Ballads about heroes like Kevin Barry were banned from the airwaves.

Plus cá change you may cry. And perhaps it is worse than ever. Who would ever have imagined that Christy Moore – once one of the brave souls along with people like Donncha Ó Dúlaing and others – to defy the fatwa, would now be lining up alongside aspirant hooligans in support of Flanagan’s “Hate Speech” bill?

Be that as it may. Back to the song.

McCann’s ballad is not only immensely moving, and indeed transformative as evidenced by Stewart’s rediscovery perhaps of his own roots, once best kept silent, but is a timely reminder of the humanity and actuality of the men and women of the revolutionary era.

Too much of that has been colonised by on one side, a Hollywood glorification of.Collins, no reflection on the man himself but he was that, just one man, and on the other by the Ken Loach inspired mythology of the left. Others, including arrivisté Shinners would have you believe that Pearse and Connolly and their comrades were premature Euro federalists. Dying for the Euro and free movement of labour and capital.

It is quite clear in fact that the revolutionaries of the 1916 period were for the greater part unfashionably traditionally nationalist in their outlook.  And part of that for most was their religious faith even though the Republic was not to be faith based, and republicans still cleave to that non sectarian definition of what a sovereign Republic would be. Catholic, Protestant and Dissenter.  None of the three fits the woke bill.

Anyone who has visited Kilmainham and the chapel in which the song is set, and stood in Grace Gifford’s cell which she illuminated with a mural of the Madonna and Child, will realise at once the vast gap that separates those men and women from those who celebrated the introduction of abortion as though their county had won the All Ireland, and placed its extension to the British administered part of Ireland above everything else.

It is clear from reading the writings of the leaders of the revolution that while they were strongly motivated, as evidenced by the words of the Proclamation, by the desire to improve the social condition of the Irish people, they were not socialists. Pearse was a social radical but not a socialist despite the weak attempts to incorporate him. At its most condescending the left claims that Pearse was “moving towards a socialist position.” He was not. In The Sovereign People, Pearse states that “no class in the nation is entitled to privileges beyond any other class except with the consent of the nation.”

It is the classical republican definition of what the Irish nation should be, not a prescription for the Marxist notion of a dictatorship of one class, or the libertarian right belief in the victory of the strongest economically over the rest.

Terence MacSwiney, the Mayor of Cork who died on hunger strike in October 1920, explicitly opposed “the war of parties and classes.”  In his autobiography, Dublin Made Me, Todd Andrews of the Dublin Brigade said: : “In our estimation there were only two classes. There were the British and their dependents and hangers on, of whom the most objectionable were the Castle Catholics, and there were the Irish. There was no Marxian slide-rule appropriate to Irish social conditions …..”

There is no Marxian slide rule to any thing. Yet, significant parts of the Irish nationalist tradition have been deluded by this. A half century ago in the face of a loyalist state supported assault on Catholic communities in Belfast the leadership of the republican movement had been diverted by communists into thinking they were a subset of Berkeley, California.

The nominal inheritors of the leaders of the republican movement are still deluded by such illusions. Unlike Grace and Joseph Plunkett and the other leaders of the Rising, they place their commitment to extraneous matters above those of the Irish people.

Their new found zeal for an Irish Language Act was concealed until the gravy train was diverted.  Their cowardly acquiescence in the introduction of abortion on demand – something that would most likely have been defeated in a popular vote – just about sums them up.

If a person was a cynic then one might just shrug it off. Then you might hear ‘Grace’ or recall the visit to the chapel or my grandmother remembering the magnificent people who defied an Empire – and not just on a Sinn Féin tee shirt. And even Rod Stewart, freed from decades of having to conceal his own tradition. At least he is not ashamed of it.

HSE’s advice on sex during pandemic: Don’t do mouth on anus for now.

WHO ‘normalising’ abortion sessions carried out in 5 Irish maternity hospitals

Irish Times Poll: The public want an end to lockdown