REVIEW: THE BEST OF BENEDICT:  An Irish Perspective

Earlier this year, Pope Emeritus Benedict XVI, formerly Cardinal Ratzinger, travelled back to his home in Bavaria to visit his ailing older brother, shortly before the latter died. It was an onerous  and poignant journey and he contacted shingles on his return. While intellectually alert, at 93 years of age, he is inevitably frail. Indeed, it was precisely because of the state of his health that he shocked the Church, and the world, by resigning in 2013, taking the designation of Pope Emeritus.

Dualta Roughneen’s book, which brings together some twenty contributions (with a Foreword by Bishop Phonsie Cullinan) on different aspects of the life and legacy of Benedict XVI could hardly be more timely. When he is called home to God this book will be a ‘go to’  reference for reflecting on his life and Papacy – is contribution to the Church and also to a world in crisis.

It’s providential that Roughneen, author and engineer, should have felt impelled to edit such a book, and at this particular time too, and drawn together such a distinguished list of contributors. While collectively they set out an Irish perspective, it is truly a global perspective, refracted through Irish writers.

This book is important, therefore, not alone because its subject is one of the great popes of these times – perhaps, of all times. Nor even – tho’ it is a mighty thing in itself – because of the depth and breath of the scholarship which Benedict XVI has left as a legacy to the Church.

It’s important primarily because Benedict XV1 is a holy man, a great spiritual leader, and that reality alone throws our surreal world, in all of its suffering, into sharp relief. His exceptional gifts, the fruits of that holiness, are in the safe keeping of a calm, a reasoned and an unaffected manner. Those who have had the privilege of knowing him well, including the eminent Ratzinger scholar Professor Vincent Twomey who contributes an important paper on IVF to Roughneen’s book, affirm this calm and unassuming personality.

There is – or so it seems to me – enormous depth of self- knowledge in Benedict XVI.That is the wellspring of an authentic freedom, so evident, for example, in his decision to resign – the first Pope to do so in 600 years – not consulting with, and deflecting the burden of responsibility on to, others but taking it solely upon himself. Only a man at peace with God, and with his own human limitations, would have done as Benedict XVI did: someone who never sought power, but God’s will.

It is this authenticity that attracted Dualta Roughneen’s attention in the first instance, drawing him to immerse himself in the writings of Benedict XVI. Authenticity: that’s it really, an authenticity that stands out in a world wracked by a rogue marxism that has been called out by Benedict XVI for its anti-human lies, and by ‘fake news’  – the ubiquitous ‘noise’ that systematically attempts to drown out the Truth and thereby subvert true human freedom that springs only from Truth.

It was the same authenticity that entirely won over the British establishment – and that is some achievement – on the occasion of Benedict XVI’s  State Visit to the UK in 2010. What might have been, and at one stage, showed indications of being,  a contentious and problematic visit was transformed instead into an enormously positive occasion.

It was the man himself, quiet, reasoned and respectful, and with a great capacity to listen, that made it such a triumph, from Edinburgh to Westminister. And never more so than in his Beatification of Cardinal Newman – an occasion of great personal joy for him. Benedict XI1 discerned in Newman the pivotal insight that an “informed conscience” is always and necessarily aligned with revealed Truth and the Magisterium of the Church.

We live in an age in which what might be called, to borrow from Reinhart Hutter, a “counterfeit” conscience has been promoted within the Church and in the world, leading to discord and, importantly, to the subversion of moral theology. Benedict has unmasked its malign influence, with his quiet, persistent, learned and humble Witness to Truth.

Even so, the results of this discord are all around us. Newman espoused the true understanding of Conscience and Benedict instinctively empathised with him.

The contributions, individually and collectively, attest to the fact that Benedict XVI is, by any measure, an intellectual giant, an outstanding theologian who helped shape Vatican II. Even more importantly, as Pope he worked to preserve the integrity of its outcomes: of unity – notwithstanding the post-conciliar dissonance that continues to reverberate, half a century later.

And therein is the enigma. Cardinal Ratzinger, as he was when appointed by Pope St John Paul II as head of the Congregation of the Doctrine of the Faith, was caricatured by unthinking and close-minded critics as an unbending “rigorist” especially in the realm of human sexuality, the anthropology of marriage and the nature of sacramental Priesthood, transmitted to His Church by Christ.

It is, of course, a misinformed and unfair caricature: a nonsense. When you read Benedict XVI’s book length interview with Peter Seewald, it is clear that he approached his responsibilities as custodian of the integrity of the Magisterium above all, through consultation and dialogue. What was important to Benedict XVI was less his own views, even as a pre eminent theologian, as his duty to preserve the Truth, entrusted by Christ to His Church. He had a name for the pressures on the Church to compromise the Truth:  “the tyranny of relativism” – the cancer of this age. Nor, at the same time, has he ever baulked at the faults and guilt of the institutional church – a reality with which he engages in an essay in “The Pilgrim Fellowship of Faith” and which is addressed in one of the contributions to this book. At the heart of his understanding is the reality that the Church is constantly renewed and made whole by Christ, in his Word and in the Sacraments and in its mission to the world.

Those with an open mind who reflect on Benedict XVI’s life, as Dualta Roughneen clearly has done, are struck by the gentleness and depth of human understanding that mark his search for, and defence of, Truth. This understanding, a willingness to reach out, is reflected in his decision to authorise the celebration of the Latin Mass, alongside the Novus Ordu and to explain precisely why this was the right, and a pastorally-minded, decision.

This empathy coexisted with a commitment to affirm the teachings of the faith – dogmatic and sacramental –  insistently and respectfully, in his writings, teaching and in the Cathecism – an epochal collaborative synthesis of the practical wisdom of Gods revelation – and that extends out from the individual, family and community to the social economy. Benedict XVI’s  extraordinary insight into the scriptures made him especially mindful of St Paul, who time and again, warned of the great dangers of accommodating to ” the world”. Benedict XVI gave no sanction to those who attempt to deconstruct these teachings and remake them in their own image, and in the likeness of a world that is “passing”.

The integrity of his service to, and his governance of, the Church is a sign to a world in crisis. World leaders of the G -7 gathered in London in 2009 deferred to his Encyclical “Deus Caritas est”. It was lauded by world leaders, from Gordon Brown to Angela Merkel as a piercingly insightful critique of poverty and injustice, of false economics and flawed politics, and the need for Governments to respond. They did, with billions of additional aid being disbursed to poorer countries. Even so, the poor are still with us: the product of wars and ideology, a dearth of Love and a famine of Truth. Everything which Benedict XVI has warned us of. This is familiar territory for Dualta Roughneen – its his area of expertise, evident in his previous book on Subsidiarity.

Ultimately, it’s not brilliance of scholarship or high office that count. It’s the extent to which a Pope attracts the faithful and the world to the Person of Jesus Christ, the incarnate Son of God. That’s what it’s about – Christ as the “Way, the Truth and the Life”. That is the epicentre of the contributions to Roughneen’s book. There is no greater example of this than Benedict XVI’s monumental  “Jesus of Nazareth”.

If the purpose of this book is to encourage readers to engage with his writings, there is no better place to begin. It peels away the wallpaper through which a misdirected use of the ‘historical critical’ method has concealed the ‘flesh and blood” – he life and teachings, death and resurrection and enduring presence in the Holy Eucharist– of the Christ of the Gospels. It is pure scholarship together with  profound meditation. What Christ said to St Thomas Aquinas “Well hast thou written of me, Thomas” could be said of Benedict XVI’s beautifully written and limpidly clear “Jesus of Nazareth”. Volume I, from the Baptism to the Transfiguration, and Volume 2, which encompasses Holy Week. They are so insightful: so accessible – so peaceful.

Dualta Roughneen’s book is an inspirational and extraordinarily timely analysis of Benedict XVI. In the difficult times that are in it – and as the world turns in hope towards Christmas –  there is no better more beautifully conceived  book to have in your Kitchen, and on your gift list. 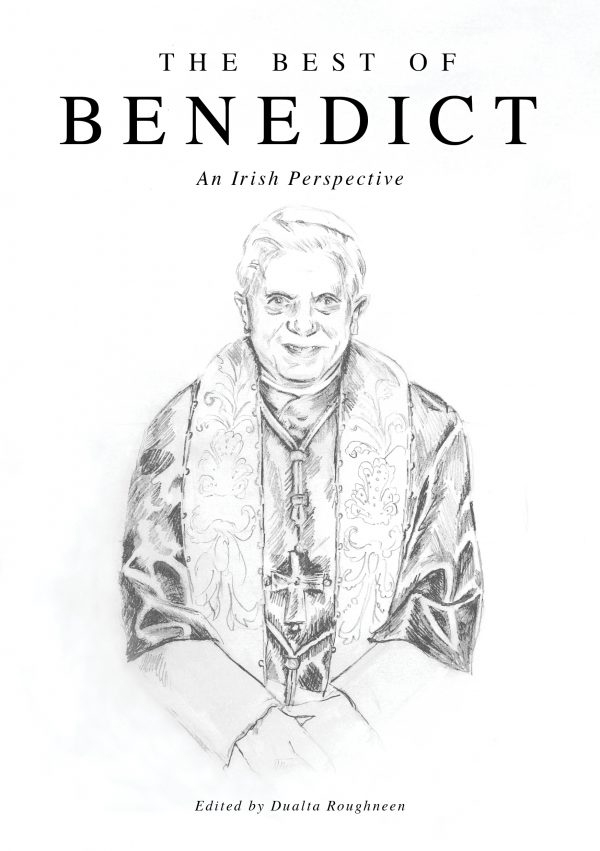 “THE BEST  OF BENEDICT”  An Irish Perspective
Edited by Dualta Roughneen

Published by One by One Press, an imprint of the Alive newspaper. The editor’s previous books include Humanitarian Subsidiarity and a book on North Korea, among others.

The Best Of Benedict is initially available at the Knock Shrine bookshop, but will soon be available elsewhere.

Yes, “taking the knee” should be booed

For the creative, the worst of times can be the best of times