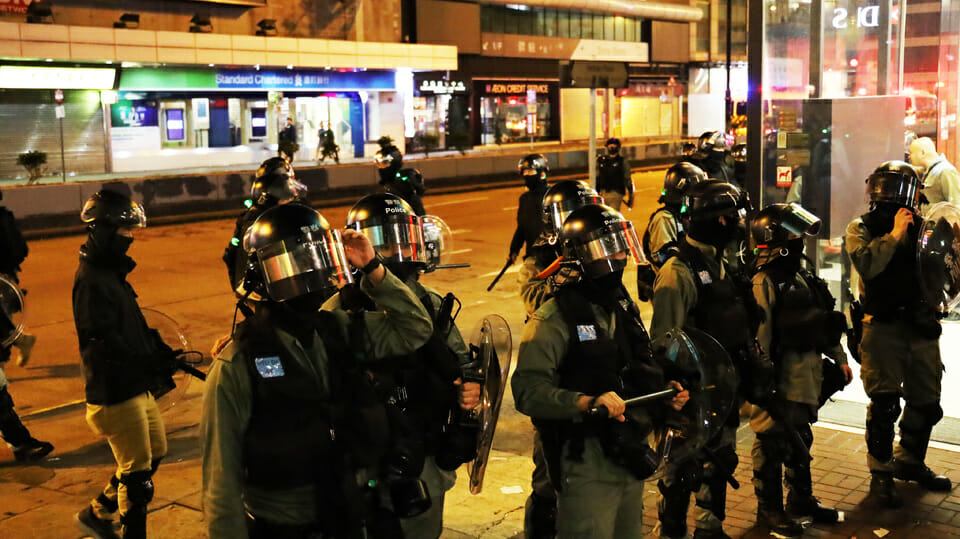 Hong Kong Free Press reports that hundreds of Hong Kongers gathered last week in memorial of 22-year-old student protestor Alex Chow Tsz-lok, who died last November after falling one storey from a car park and sustaining fatal head injuries. It is believed by some that he was trying to evade police as they attempted to disperse the crowd of protestors.

District Councillor Isaac Lee issued a post on Facebook claiming that inside the car park where the demonstration was to be held were 300 riot police – in his words, “the highest number ever” – and advised that people put “personal safety first”.

It is reported that crowds began to assemble around 7:30 to pay tribute to the deceased student with white flowers and lit candles beside a Christian cross outside the parking lot where he died, which they have done on the 8th of each month since his passing. They observed a minute’s silence, and pro-democracy posters could be seen plastered on the walls.

However, within an hour it was reported by HKFP that police declared the demonstration to be unlawful and called on the crowd to disperse, sealing off the area with cordon tape. It’s reported that many remained in the parking lot in a tense stand-off with police, with authorities threatening to search protestors and collect evidence against them. It is alleged that one young man waving a protest flag was taken away by police, and several people were stopped and searched. Protestors alleged that police stopped them, asked them to look into a camera and state their full name and Hong Kong identity card, presumably for future prosecution.

HKFP reports that protestors were eventually given permission to leave by showing police their ID card, though many remained.

Some time after midnight, police began to chase a group of protesters, and a female reporter covering the incident was knocked to the ground by a charging officer wielding a riot shield. The reporter’s TV station stated that she had hit her head and experienced a ringing ear and dizziness.

The situation in Hong Kong is developing, with more news sure to emerge in the coming weeks.

Tricked into performing an abortion: The Vermont case with lessons for Ireland