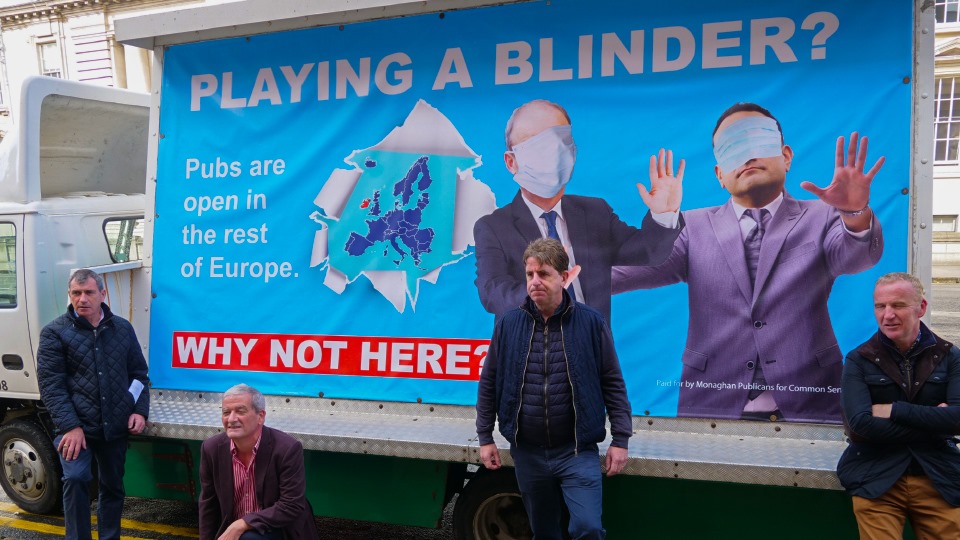 Here’s what the publicans, from Monaghan, have to say for themselves (emphasis mine):

For months pub owners across Ireland have borne the costs of this pandemic, and we have done so largely without public complaint. But that ends today.

“Across Europe, the pubs are open. Pubs in Northern Ireland can serve outdoors. As publicans  in the border counties, we have to observe the ludicrous situation where we watch our life’s work slowly slide into bankruptcy while our customers go across the border to Crossmaglen or Aughnacloy for a pint

How is it that every other country in Europe can manage to safely re-open bars, but Ireland cannot? The Government cannot claim to be on top of this pandemic when, on this metric, we’re the slowest performers in Europe. Everybody wants to protect the vulnerable, but it is also vital that we get back to normal life.”

The bit in bold is key, really. The Irish Government has missed no opportunity to compare itself and our progress to that in other countries. And yet, here we sit, denied our pints while the Germans swill their beers as if there was never a pandemic at all. How did that happen? Either Ireland has done an especially poor job at managing the pandemic, or there’s some other explanation.

And the publicans have every right to be annoyed. It’s one thing if you lose your business, and your livelihood, and your life’s work because you made a bad business decision, or your customers went somewhere else. But the hardship that they are enduring at the moment has all been inflicted, directly and deliberately, by the Government. They’re collateral damage, of course, rather than the real target. But the Americans didn’t have much luck when they tried explaining to fellas in Baghdad that their homes were bombed but it wasn’t on purpose, because the bombs were meant for Saddam Hussein. People who have their lives blown up don’t tend to be happy, whether it was done on purpose or not.

The biggest single question that the Government has to address here is safety, and on the pub issue, their safety message is consistently being undermined by, of all things, Government policy. If it’s safe for a school to re-open, why isn’t it safe for a rural pub? You’ll find many fewer people in a rural pub most evenings that you’ll find in the corridor of a busy school at lunchtime.

And it’s not just the publicans, either. They’re self interested, for obvious (and perfectly understandable) reasons, but the rural pub isn’t just about its owner. There are lots of people up and down the country who’ve lost their primary social outlet, and who are isolated as a result. Publicans make money, after all, because they offer a service that regular customers are eager to pay for.

The Government’s credibility on this one is stretching thin. This might be the first, proper, open rebellion by an interest group against the continued restrictions. It sure as hell won’t be the last.