Protests at abortion centres may not be banned, it seems 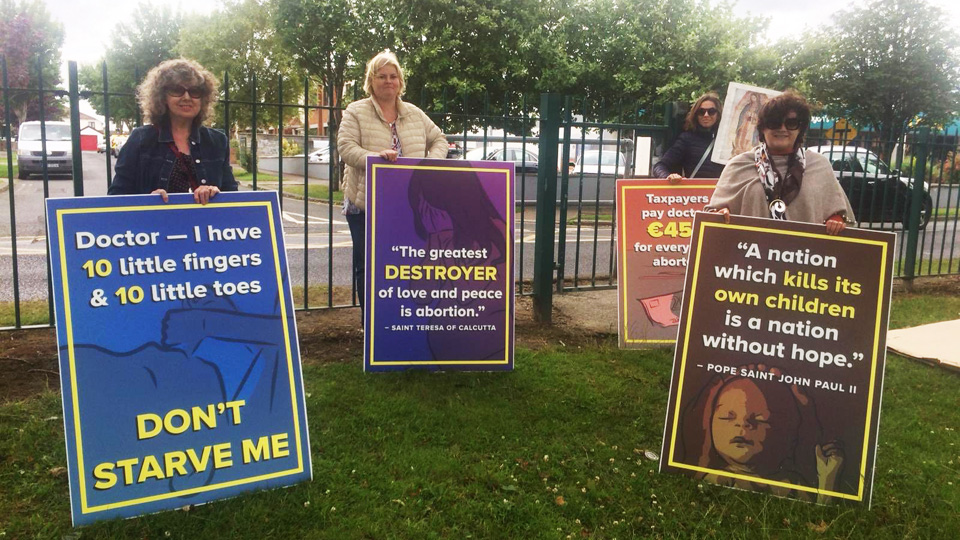 Health Minister, Stephen Donnelly has indicated that pro-life protests outside abortion centres will not be outlawed under new legislation, a move that has been welcomed by pro-life activists.

Abortion campaigners had sought to ban peaceful and often prayerful outreaches outside GP offices or hospitals, despite Gardai saying that no issues had arisen. Pro-life groups said that introducing so-called “safe access zones” was an attempt to criminalise peaceful protests and a denial of fundamental rights.

In a written answer to a private question asked by Holly Cairns TD, the Minister for Health said that “it was originally intended to provide for safe access to termination of pregnancy services in the Health (Regulation of Termination of Pregnancy) Act 2018.”

“However, a number of legal issues were identified which necessitated further consideration,” he acknowledged, also noting that since the abortion regime began there had been “a limited number of reports of protests or other actions relating to termination of pregnancy.”

“Where problems do arise with protests outside healthcare services, there is existing public order legislation in place to protect people accessing services, staff and local residents,” he admitted.

Previously,  Leo Varadkar told the Dáil: “We are running into real difficulties around restricting peaceful protest and restricting free speech.” The Taoiseach also conceded that in placing a ban on peaceful protest “we do enter a difficult space in a democracy when you decide that certain opinions can’t be held, certain types of protests can’t happen. In a democracy, if you’re going to restrict free speech and if you’re going to restrict the right to protest, you need to be on very solid ground.”

In September 2019, Garda Commissioner Drew Harris told the then Minister for Health Simon Harris, that there was no evidence to suggest that there is threatening, abusive or insulting behaviour directed towards persons utilising abortion services

“I re-confirm my views expressed at our recent meeting that protests to date at such centres have not contravened the law and are peaceful”, he said. The Garda Commissioner was of the opinion that existing laws against harassment and intimidation are more than adequate to deal with whatever issues may arise.

Pro-life groups and activists said his evidence showed that the exclusion zone plan had no justification and was unconstitutional and draconian.

Niamh Uí Bhriain said that pro-life people who witnessed at abortion centres were motivated by compassion and than vigils were always peaceful and often prayerful. “We have heard abortion campaigners make untrue allegations of intimidation, but that’s a spin used to try to drum up support for an attempt to criminalise people and shut down the pro-life position.”

“It now looks as if a thoroughly dishonest attempt to demand that perfectly legitimate and peaceful vigils should be banned has not succeeded because of the constitutional right to protest,” she said. “We would welcome that outcome and commend the pro-life activists around the country who continue to offer women a better answer than abortion.”

She said that the Programme for Government had agreed the establishment of  “exclusion zones” to criminalise peaceful pro-life vigils, but that clearly a legal barrier had arisen.

“This was a priority for Simon Harris and other abortion-obsessives, and the media have been banging a drum in this issue too, but it seems that sometimes fundamental freedoms can over-ride political desires,” she said.

“The exclusion zones would have made it a crime to offer or even show a woman going for an abortion a leaflet. So much for women having the right to be fully informed. Women deserve better than to be denied alternatives to abortion.”

She wrote that: “people of goodwill would have been concerned that the government was acting as if it were determined to make abortion a first and only choice for women; seeking the power to arrest anyone who simply gives a woman going into an abortion centre a pamphlet saying ‘we can help’, and offering a pathway that protects both lives. There was also a growing concern that the constitutional right to protest was under attack.”.